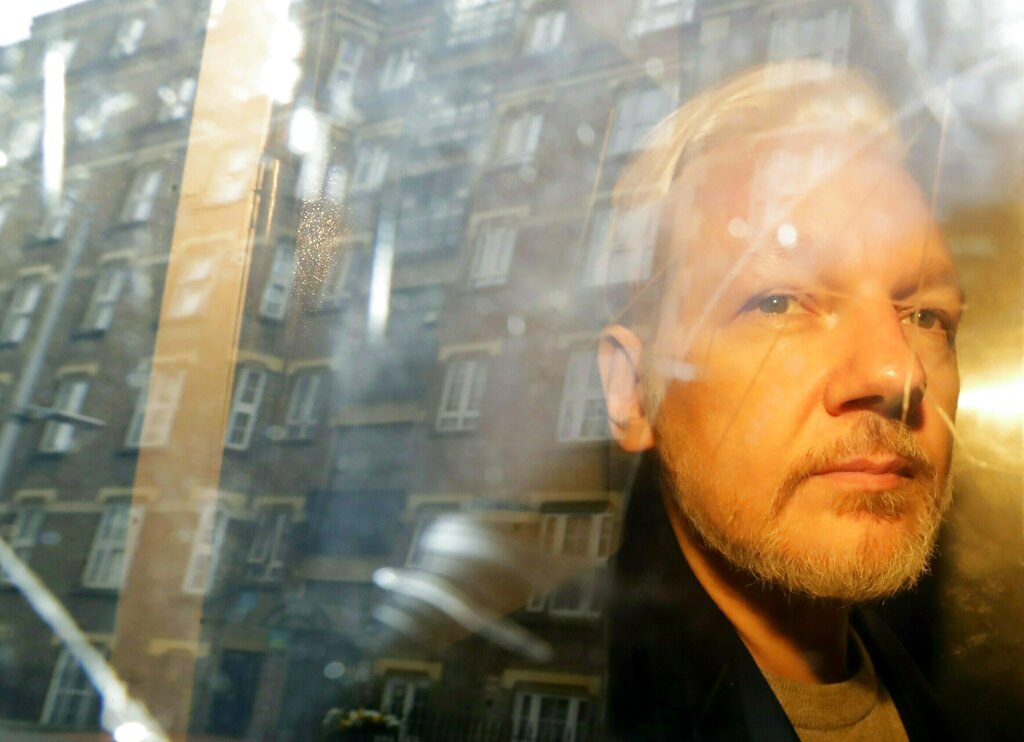 In this Wednesday May 1, 2019 file photo, buildings are reflected in the window as WikiLeaks founder Julian Assange is taken from court, where he appeared on charges of jumping British bail seven years ago, in London. (AP Photo/Matt Dunham)

Swedish prosecutors said Monday they are reopening a rape case against WikiLeaks founder Julian Assange and will seek his extradition from Britain.

The move sets up a legal battle with the United States, where the Australian computer hacker is separately wanted for allegedly hacking into a Pentagon computer. British authorities will have to decide which extradition request takes precedence.

Assange, who sought refuge in the Ecuadorian Embassy in London in 2012 to avoid being sent to Sweden for questioning, was evicted last month after Ecuador revoked his political asylum. He was arrested by British police on April 11 and is currently in London's Belmarsh Prison serving a 50-week sentence for jumping bail in 2012.

Eva-Marie Persson, Sweden's deputy director of public prosecutions, told a news conference in Stockholm Monday that "there is still a probable cause to suspect that Assange committed a rape." She added: "It is my assessment that a new questioning of Assange is required."

Swedish prosecutors filed preliminary charges — a step short of formal charges — against Assange after he visited the country in 2010, following complaints from two Swedish women who said they were the victims of sex crimes committed by Assange.

While a case of alleged sexual misconduct was dropped in 2017 when the statute of limitations expired, a rape allegation remains. Swedish authorities have had to shelf it because Assange was living at the embassy at the time and there was no prospect of bringing him to Sweden.

The statute of limitations in that case expires in August next year. Assange has denied wrongdoing, asserting that the allegations were politically motivated and that the sex was consensual.

The Australian secret-spiller now faces questioning in Sweden, on top of being held on a U.S. extradition warrant for allegedly conspiring with former Army intelligence analyst Chelsea Manning to hack into a Pentagon computer.

Assange's Swedish lawyer Per E. Samuelson told The Associated Press on Monday that the decision to reopen the rape case is "outrageous."

"He is in prison in the U.K., he faces the risk of being extradited to the United States and on top of that, to demand that he's going to put all his energy into looking into a 10-year-old story from Sweden is just too much," he said.

But Elisabeth Massi Fritz, the lawyer for the woman who reported being raped by Assange, said her client "feels great gratitude" over the decision to reopening the case.

She said it "signals that no one stands above the law," and that "the legal system in Sweden doesn't give a special treatment to anyone."

Persson said a European arrest warrant will be issued for Assange. A Swedish court would formally issue the extradition request, which Assange could appeal.

She added that while there is a risk the case may cut close to the statute of limitations deadline, "there is also a chance that we will be able to get him extradited before August 17 next year."

Persson said it was "impossible to predict" how the extradition process would unfold.

The 47-year-old Australian met the women in connection with a lecture in August 2010 in Stockholm. One was involved in organizing an event for Sweden's center-left Social Democratic Party and offered to host Assange at her apartment. The other was in the audience.

A police officer who heard the women's accounts decided there was reason to suspect they were victims of sex crimes and handed the case to a prosecutor.

Neither of the alleged victims has been named publicly.

Assange faces a maximum of four years in prison in Sweden.

The British extradition process is not swift, and Assange could appeal several times if decisions go against him. It's expected it would take a year or longer for him to be sent to the United States or possibly to Sweden even if he ultimately loses in court.

WikiLeaks' Editor-in-Chief Kristinn Hrafnsson said the decision to reopen the case against Assange "will give Julian a chance to clear his name."

He said in a statement that Persson had been under "intense political pressure" to reopen the case, and criticized authorities for "mishandling" it from the start.

WikiLeaks' Assange gets 50 weeks in prison for jumping bail