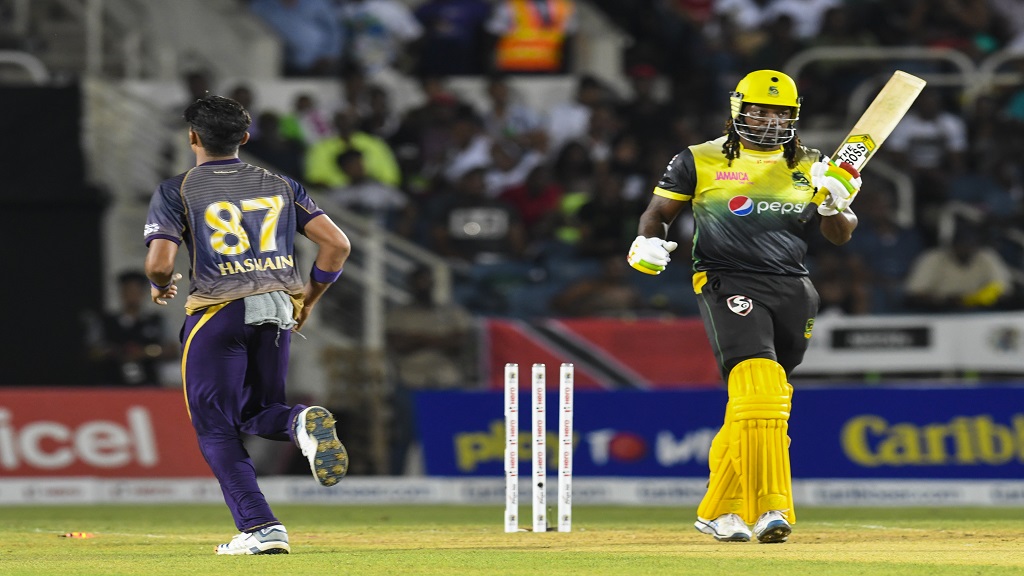 Sent in to bat,  Trinbago Knight Riders blasted the highest ever CPL total of 267 for two off their allotted 20 overs and then restricted the Tallawahs to 226 for five to return to the top of the table.

Colin Munro, one of the heroes of TKR’s success last season, celebrated his return to the side with an unbeaten 96, Lendl Simmons smashed 86 and Kieron Pollard 45 not out as fours and sixes flew all around the ground and the Tallawahs paid a heavy price for an error-strewn display. 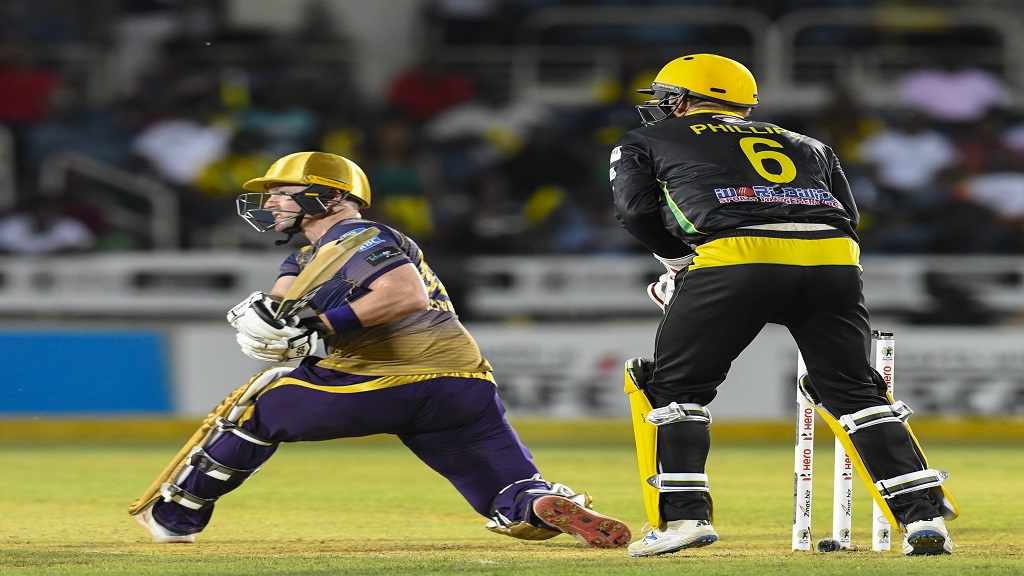 The Tallawahs made a brave stab of the chase, with big-hitting pair Chris Gayle and Glenn Phillips exploding from the blocks. There was no other way for the Tallawahs to go, but their progress was checked in the eighth over by a double strike from Mohammad Hasnain, who bowled Gayle for 39 from 24 and then had Chadwick Walton caught behind from a top-edged pull for six.

Things got tougher still when Rovman Powell had to retire hurt with what appeared to be an abdominal injury after smashing his second ball over midwicket for six. He had been in discomfort when bowling and didn’t return to the middle. With Andre Russell also sidelined after being hit on the head against St Lucia Zouks, the sight of Powell in such obvious pain will be a worry for the Tallawahs with three more home games to come over the next week. 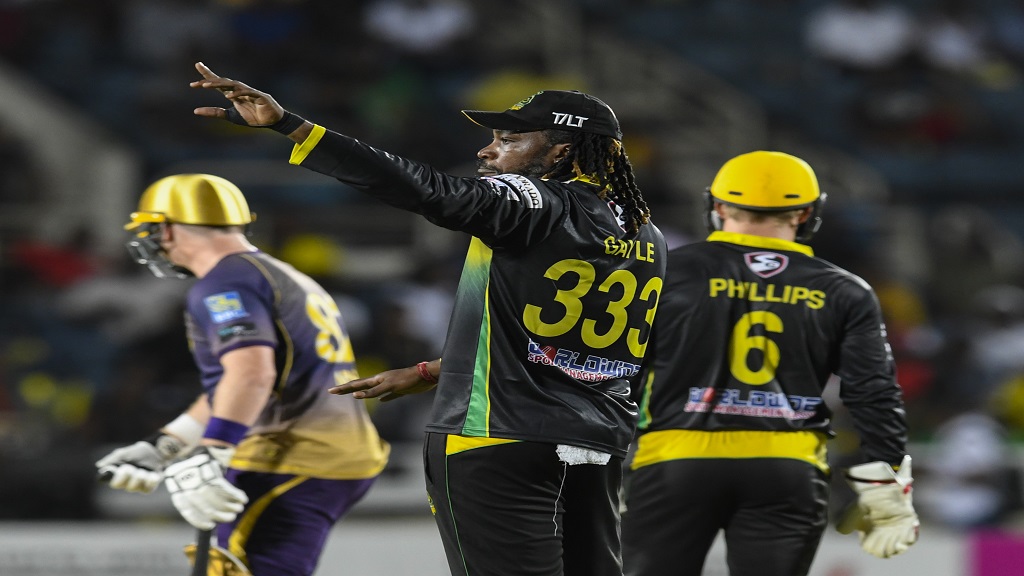 Chris Gayle (centre) of Jamaica Tallawahs set the field during match 10 of the CPL against Trinbago Knight Riders.

Phillips went through to his 50 from just 22 balls having been dropped twice when on 37 but his luck ran out on 62 as he miscued Pollard to deep midwicket where Munro made no mistake.

Even with the Tallawahs scoring as freely as they were, the required rate had skyrocketed to 17 an over and while the boundaries continued to come for the likes of Ramaal Lewis (37 not out off 15 balls) and Javelle Glen (34 not out off 24 balls) so too did wickets as the chase fell away.

It will not be the batting that disappoints the Tallawahs when they come to analyse this defeat, though.

No-balls and dropped catches cost the Tallawahs dear, with the tone set in the Power Play when Simmons was caught at mid-on off a no-ball. The Knight Riders racked up 65 for one in those six overs and only accelerated from there

Simmons pulled the second ball of the night behind square-leg for a boundary, before a high wide beat everyone to add five more to the total.

It would get worse for the home side. Jerome Taylor took 17 balls to complete his first two overs, with three wides and two no-balls in there. Both no-balls proved costly; the free hit after the first was heaved for four by Simmons, but even more importantly he would have been dismissed had Taylor not overstepped a second time, chipping the ball to mid-on and starting to walk off before the umpire’s call saved him.

In between those two overs, Sunil Narine (20) smacked Green for four and six in successive balls. Three fours – two of them admittedly off thick outside edges – in Oshane Thomas’ first over sent the score racing past 50 without loss. 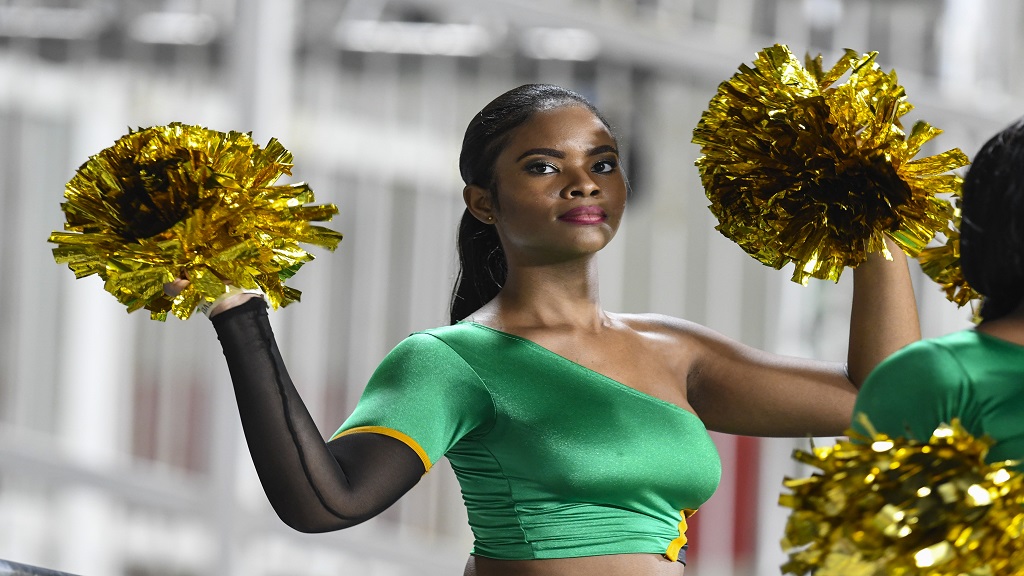 Cheerleaders perform during match 10 of the CPL between Jamaica Tallawahs and Trinbago Knight Riders.

Zahir Khan finally made the breakthrough, spinning one back to Narine and beating his attempted sweep. Any thoughts the Tallawahs entertained of regaining some control after that wicket were soon forgotten as the 2018 CPL leading run-scorer Munro strode to the middle for his first bat of the season. His first ball was cut hard for four and his third reverse-swept all the way for a Hero Maximum.

Simmons was dropped in the deep twice in the 10th over while also picking up his second Hero Maximum of the night as TKR took advantage of their hosts’ generosity to reach 96 for one at the halfway stage.

A cut for two took Simmons through to 50 from 32 balls in the 12th over, and it was after that the Knight Riders innings truly accelerated as 154 runs came from the last eight overs.

The 13th over, Powell’s last, produced 23 runs. Munro smoked two sixes over the legside, with Simmons adding another with a wristy whip of a shot that screeched hard, low and flat back over the bowler’s head to clear the rope.

It was the same story in the next as three more sixes rained down on Sabina Park. Munro reverse-swept Zahir for successive sixes as he cruised past 50 before Simmons almost took out a cameraman with the third Hero Maximum of the over.

The Tallawahs finally saw the back of Simmons in the 15th  over, but not before another 20 runs were added to the increasingly daunting total. There was an element of farce to the wicket when it came, with Simmons caught in the deep off a free hit after yet another no-ball, Derval Green celebrating the catch before realizing it was a free hit and arrowing a throw to the bowler’s end to run Simmons out as he attempted a third. He made 86 from 42 balls, with eight fours and five Hero Maximums.

Again, the wicket did nothing to change the momentum of the innings as Pollard walked in and picked up where Simmons had left off.

Munro hit Green for back-to-back sixes as a hundred started to look a real possibility, but it was Taylor’s final over – the 18th of the innings – that ensured the record books would be rewritten again. Two more no-balls didn’t help the bowler’s cause one bit as 30 runs came in all. Remarkably, it would have been even worse had Lewis not produced a heroic piece of fielding in the deep to leap high and flick a ball that seemed certain to go for six back into play.

There was still time for four more fours and another six as the partnership finished on an unbeaten 88 in just 5.2 overs. The only slight disappointment for the Knight Riders was Munro selflessly giving up the strike in the final over and finishing just four runs short of a century.

Jamaica Tallawahs penalised for slow over rate against TKR