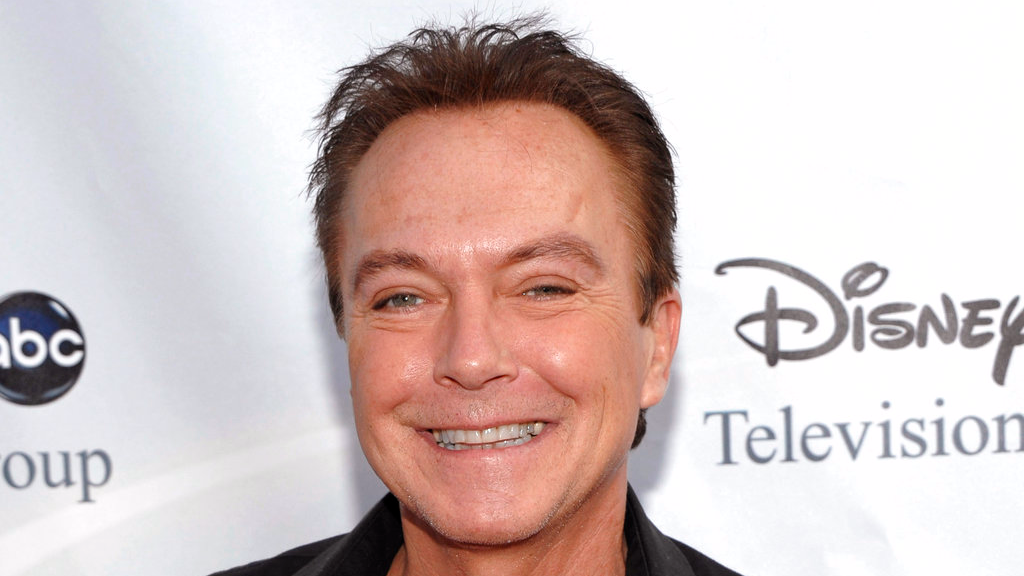 David Cassidy, the teen and pre-teen idol who starred in the 1970s sitcom "The Partridge Family" and sold millions of records as the musical group's lead singer, died Tuesday at age 67.

Cassidy, who announced earlier this year that he had been diagnosed with dementia, died surrounded by his family, a family statement released by publicist JoAnn Geffen said. No further details were immediately available, but Geffen said on Saturday that Cassidy was in a Fort Lauderdale, Florida, hospital suffering from organ failure.

"David died surrounded by those he loved, with joy in his heart and free from the pain that had gripped him for so long," the statement said. Thank you for the abundance and support you have shown him these many years."

"The Partridge Family" aired from 1970-74 and was a fictional variation of the '60s performers the Cowsills, intended at first as a vehicle for Shirley Jones, the Oscar winning actress and Cassidy's stepmother. Jones played Shirley Partridge, a widow with five children with whom she forms a popular act that travels on a psychedelic bus. The cast also featured Cassidy as eldest son and family heartthrob Keith Partridge; Susan Dey, later of "L.A. Law" fame, as sibling Laurie Partridge and Danny Bonaduce as sibling Danny Partridge.

It was an era for singing families — the Osmonds, the Jacksons. "The Partridge Family" never cracked the top 10 in TV ratings, but the recordings under their name, mostly featuring Cassidy, Jones and session players, produced real-life musical hits and made Cassidy a real-life musical superstar. The Partridges' best known song, "I Think I Love You," spent three weeks on top of the Billboard chart at a time when other hit singles included James Taylor's "Fire and Rain" and Smokey Robinson and the Miracles' "The Tears of a Clown." The group also reached the top 10 with "I'll Meet You Halfway" and "Doesn't Somebody Want to be Wanted" and Cassidy had a solo hit with "Cherish."

Cassidy's appeal faded after the show went off the air, although he continued to tour, record and act over the next 40 years, his albums including "Romance" and the awkwardly titled "Didn't You Used To Be?" He had a hit with "I Write the Songs" before Barry Manilow's chart-topping version and success overseas with "The Last Kiss," featuring backing vocals from Cassidy admirer George Michael. He made occasional stage and television appearances, including an Emmy-nominated performance on "Police Story."

Meanwhile, "The Partridge Family" remained popular in re-runs and Cassidy, who kept his dark bangs and boyish appearance well into middle age, frequently turned up for reunions and spoke often about his early success.

"So many people come up to me and talk to me about the impact it (the show) had," he told Arsenio Hall in 1990.

Even while "The Partridge Family" was still in primetime, Cassidy worried that he was mistaken for the wholesome character he played. He posed naked for Rolling Stone in 1972, when he confided that he had dropped acid as a teenager and smoked pot in front of the magazine's reporter as he watched an episode of "The Partridge Family" and mocked his own acting. Cassidy maintained an exhausting schedule during the show's run, filming during the week and performing live shows over the weekend, but had plenty of time to indulge himself. In the memoir "Could It Be Forever," he wrote of his prolific sex life and of rejecting Dey's advances because she lacked the "slutty aspect of a female that I always found so attractive."

Cassidy would endure personal and financial troubles. He was married and divorced three times, battled alcoholism, was arrested for drunk driving and in 2015 filed for bankruptcy. Cassidy had two children, musician Beau Cassidy and actress Katie Cassidy, with whom he acknowledged having a distant relationship.

"I wasn't her father. I was her biological father but I didn't raise her," he told People magazine in 2017. "She has a completely different life."

Cassidy himself was estranged from his father. Born in New York City in 1950, he was the son of actors Jack Cassidy and Evelyn Ward and half-brother of entertainer Shaun Cassidy. David Cassidy's parents split up when he was 5 and he would long express regret about Jack Cassidy, who soon married Shirley Jones, being mostly absent from his life. David Cassidy stayed with his mother and by the early 1960s had moved to Los Angeles.

Kicked out of high school for truancy, David Cassidy dreamed of becoming an actor and had made appearances on "Bonanza," ''Ironside" and other programs before producers at ABC television asked him to audition for "The Partridge Family," unaware that he could sing and intending at first to have him mime songs to someone else's voice. Cassidy, who only learned during tryouts that Jones would play his mother, worried that Keith Partridge would be a "real comedown" from his previous roles.

"I mean, how much could an actor do with a line like, 'Hi, Mom, I'm home from school,' or 'Please pass the milk?'" he wrote in his memoir. "I didn't see how it could do much for me. After all, I wasn't the star of it. Shirley had top billing; I was just one of the kids."

Camera operator dies in Ghana on set of Netflix drama