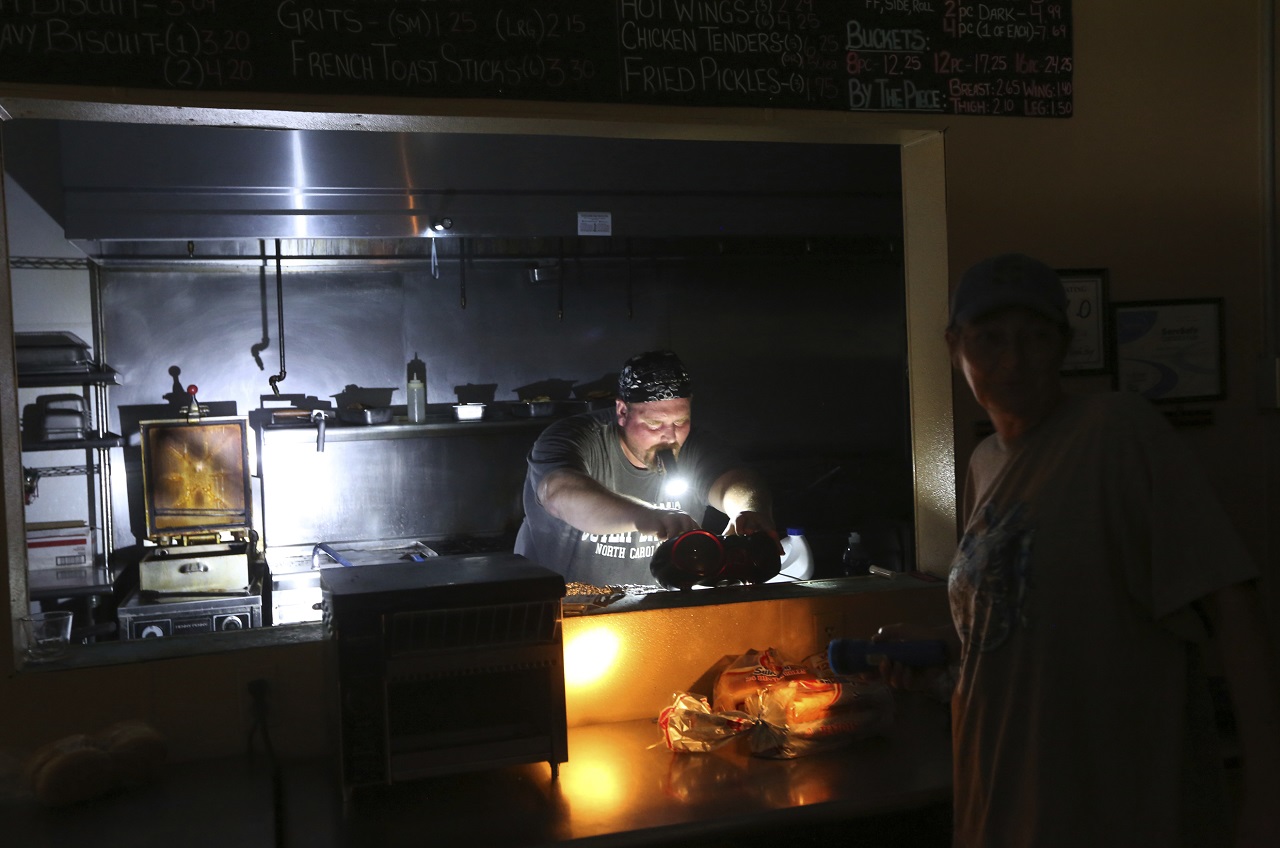 Aaron Howe cooks in the dark kitchen at the Island Convenience Store in Rodanthe on Hatteras Island, N.C., on Friday, July 28, 2017 after a widespread power outage.

A "steady stream" of tourists left a North Carolina island Saturday under evacuation orders prompted by a widespread power outage, wiping out a significant chunk of the lucrative summer months for local businesses.

It could take days or weeks to repair an underground transmission line damaged early Thursday by construction crews working on a new bridge between islands.

The construction company drove a steel casing into an underground transmission line, causing blackouts on Ocracoke and Hatteras islands.

Cars lined up Friday to get on ferries, the only way off Ocracoke Island, after about 10,000 tourists were ordered Thursday evening to evacuate. A second order for visitors to Hatteras Island, south of Oregon Inlet, meant up to 60,000 additional people had to evacuate starting Saturday, primarily north over the inlet bridge.

As of 2 p.m. Saturday, North Carolina ferries had evacuated about 3,800 people and 1,500 cars from both islands, according to Gov. Roy Cooper's office.

"We'll do all we can to get repairs moving," he said in a release Saturday.

Dare County spokeswoman Dorothy Hester had no estimate for how many people still needed to leave Hatteras Island.

"We realize people are disappointed. They brought a lot of stuff here. They're packing up and moving out," she said. "While disappointed, they're going to make their way home."

Roughly 80 percent of the islands' tourism stems from vacation rentals, and the order coincides with the customary Saturday turnover for weekly home rentals, so those people would be leaving anyway. The big question is when visitors can get to homes already rented for upcoming weeks in the height of tourism season, said Lee Nettles, director of the Outer Banks Visitors Bureau.

While villages north of the bridge may benefit from some displaced tourists, others "got the message and are staying home," he said.

The order barring inbound tourists did not apply to Hatteras Island's roughly 6,000 year-round residents or to other property owners.

"Residents are fine. We all know how to pull together," said Angela Conner Tawes, manager of Conner's Supermarket, a third-generation grocery store in Buxton, which delivered about 90 barbeque sandwiches to utility workers for lunch. "But financially for us, losing time in August is a big deal. This is when we make our money for the year. We're just holding our breath and waiting."

As of Saturday afternoon, tourists were still shopping at the store, which has kept regular hours due to its two large generators. One unknown is whether the store will get its Tuesday scheduled delivery, Tawes said.

"Until we know something, we're trying not to fret too much," she said.

The island's regular summer fish fry remained on schedule for Saturday evening since organizers ordered the fish before the evacuation call was made Friday. Now they're just hoping to recoup their costs. They're foregoing the normal plate fees, feeding whoever shows up with whatever they can pay, if they can.

"It's better for it to be eaten than go to waste," said Mary Ellon Ballance, president of the Ladies' Auxiliary of Hatteras Village Volunteer Fire Department, one of four groups that hold the weekly fundraiser. "This is like a dry hurricane for us — the aftermath of a hurricane without the destruction."

But conservation measures were still mandatory. Those rules primarily bar the running of air conditioning and hot tubs, Hester said.

Business owners were upset that the disaster was caused by human error, not Mother Nature.

Wells said his restaurant, closed by the outage, is missing out on at least $5,000 a day in sales. He said many seasonal businesses close for one-third of the year, making the summer months essential to their bottom lines. His 25 workers typically make between $75 and $250 a day.

"So when you take this hit in July and factor in that you're only open eight months out of the year, it's big," he said. "It's a lot more than people even realize."

He estimated that total losses for shops, hotels and restaurants on the island could easily top $100,000 per day.