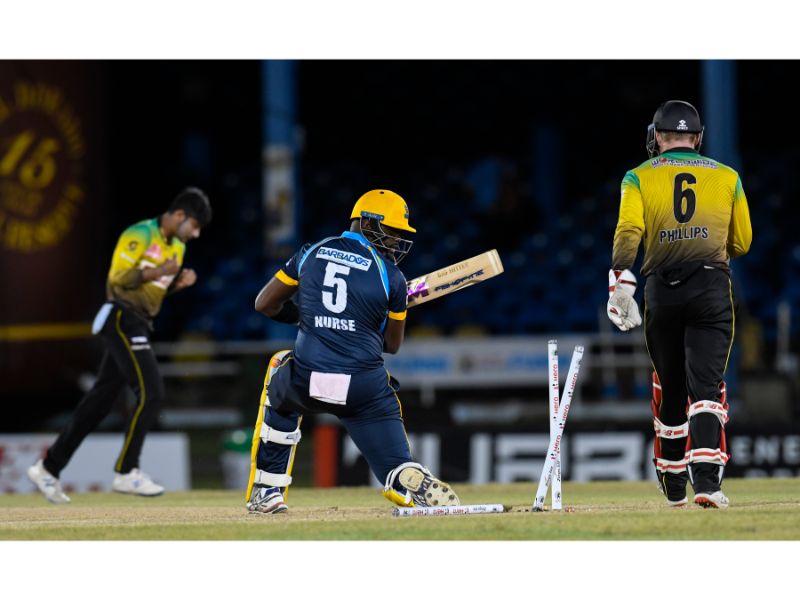 Kyle Mayers' brilliant 85 helped the Barbados Tridents break a three-game losing streak with a 36-run victory over the Jamaica Tallawahs on Wednesday at the Queen's Park Oval, Port-of-Spain.

Mayers thrashed eight sixes, including four in a Carlos Brathwaite over, to pace the defending champion Tridents to 148/7.

Mujeeb ur Rahman took 3/14 and Sandeep Lamichhane 2/16 for a Tallawahs team without Andre Russell, who was sidelined with a knee injury.

The Tallawahs quickly sank to 27/4 with Jason Holder (2-18) and Mitchell Santner (2/10) making early inroads into the Jamaican outfit's batting line-up.

Hayden Walsh Jr (1/17) and Rashid Khan(2/33) landed telling body-blows in the middle overs as the Tallawahs tailed away to their third defeat in five games.

Mujeeb did for both Tridents openers - an off-break turned big to trap Shai Hope LBW and a carrom ball to Johnson Charles took the edge for Tallawahs skipper Rovman Powell to take a good catch at slip.

Veerasammy Permaul played his first game of the Hero Caribbean Premier League (CPL) season replacing Russell, and he started well until Kyle Mayers lofted him for six over extra cover. Mayers repeated the trick off Edwards and the Tridents reached the Powerplay at 37/2.

Holder lifted Permaul onto the rope at  long-on, and Mayers took a liking to Powell in an over that went for 17.

Brathwaite didn’t escape punishment as Mayers timed him over point, bringing up a 50 partnership off just 29 balls. Powell went to Lamichhane, whose googlies restricted Mayers and Holder to three off the 10th over. At halfway, the Tridents were 79/2.

Mujeeb could have had Mayers had a close LBW shout been given or had Glenn Phillips held a catch, but with the Afghan and Nepalese combining for 5/30, little did we know how crucial that would prove.

Brathwaite disappeared to all parts as Mayers launched four Hero Maximums, and even good death bowling saw the Tridents end on a competitive looking total.

Santner started superbly, bowling Phillips as part of a wicket-maiden.

Chadwick Walton flayed Holder for four and pulled him for a Hero Maximum, but the Tridents captain nicked him off with a Test match-style seaming beauty. Santner followed up with another fine over, and the Tallawahs were 13/2 after three.

Walsh Jr went for just three runs, all due to misfields including a dropped catch.

Blackwood’s first boundary was a thick inside edge off Holder, and the captain’s extra bounce did for his opposite number Rovman Powell who gloved down the leg-side to the keeper.

At 22/3 off 5 overs, the Tallawahs were precariously placed, and that was before Rashid Khan came on for the last over of the Powerplay. The required run rate was now approaching nine an over.

Walsh Jr spilled a tough caught-and-bowled off Blackwood, but finally got his first wicket of Hero CPL 2020 as Asif holed out to long-off to plunge the Tallawahs into even deeper strife. The leg-spinner celebrated with a huge roar of delight.

Ashley Nurse went for just five off two overs, and Walsh Jr beat Blackwood on both edges to leave the Tallawahs 36/4 needing 11 an over off the last 10 with three overs of Rashid still to face.

In a familiar tale, the Tallawahs had failed to score off 44 of the first 60 balls.

Things seemed to be picking up after the break. Bonner pulled Walsh Jr for the first boundary in 37 balls, Blackwood joined with a Hero Maximum to put a slight dent in Walsh Jr’s figures, and the two scored off every ball of Rashid’s second over including a boundary.

But Santner’s return did the trick. Blackwood hit one big Hero Maximum over the sightscreen, but a slower ball deceived him into holing out to long-on.

Rashid capped a horrible night for Brathwaite, pinning him LBW with a fast googly, and after a mini-recovery the Tallawahs were 68/6 off 14 and needed 13.5 an over.

Santner finished a brilliant spell - 20 off his 24 balls were dot balls and a Hero Maximum was his only boundary conceded.

Bonner hammered Raymon Reifer for a Hero Maximum, but Permaul took nine balls to get off the mark, and with the Tallawahs needing 17.25 an over, Bonner took it upon himself to farm the strike.

Rashid ended the Tallawahs’ last faint hope, as Bonner tried to pull an unpullable ball and Anderson held the top-edge.

Mujeeb deposited his countryman for a pair of Hero Maximums, but even so the required run rate at the end of the over was higher than when it started.

Mujeeb continued his fun with a reverse hook off Nyeem Young, but the youngster made a contribution taking an excellent catch diving forward at deep point to give Reifer the wicket of the scratchy Permaul.

Reifer made it two when Mujeeb tried to reverse sweep a middle-stump yorker, and in the end the only thing missing for the Tridents was a wicket for Young. Russell or no Russell, the Tallawahs batters need to find some answers fast.