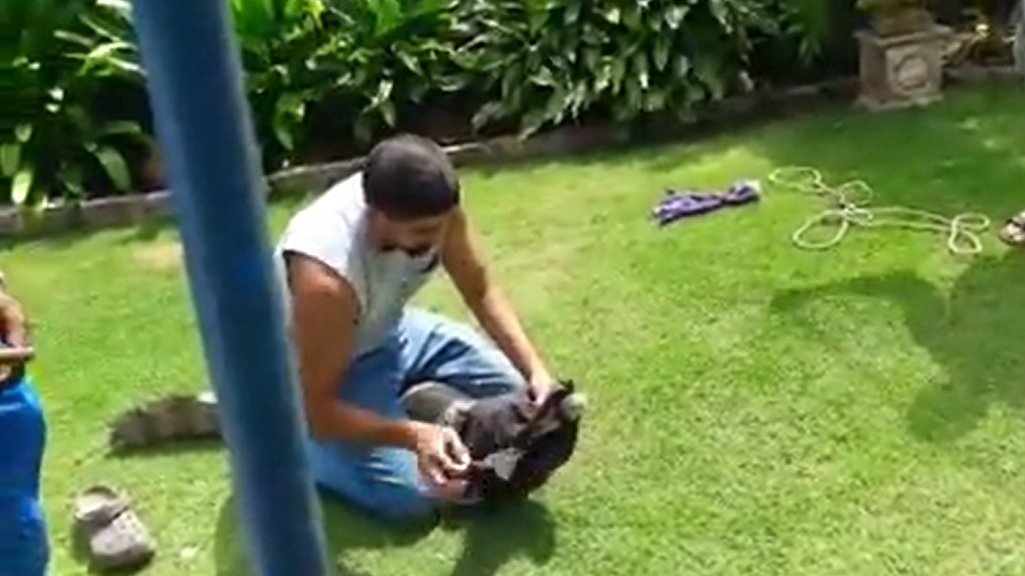 One man is being called the local Steve Irwin after he was caught on video casually restraining a caiman which wandered into a Westmoorings home.

Speaking to LoopTT, President of the Reptile Conservation Centre of Trinidad and Tobago (RCTT), Saiyaad Ali, said that Lennard has been with the organisation for over 10 years and is very experienced with the process.

Ali said that with the onset of the rainy season, they’ve been getting an average of two calls per week for caimans which have strayed from their usual watercourses into homes, however this was the first call for the season they got for the Westmoorings area.

“The flooding tends to affect them…when the water levels rise they may get dispersed from their natural water catchments and get caught in residential areas,” he said.

He said most times the caimans are simply chased back into the river but in this case there was a concern for any small children in the area, so they were called in to safely relocate the animal.

Ali said the group has been involved in conservation efforts for many years and is urging anyone who spots caimans in their residence to call the group to safely relocate them.

Citizens were impressed with Lennard’s capable skills in safely restraining the animal, even comparing him to the movie character Crocodile Dundee.

Ronald Ramrattan: “The man is a boss.”

Andrew K. Mohepath: “Man raff that caiman like 2 bara and wrap it up to go with slight pepper oui.”

Rachel Abrahim: “That man real good yes, he handled it like ah boss.”

Akshay Naraine: “What a beautiful Caiman!”

If you spot a caiman in your premises, please contact any of these NGOs to have them safely relocated:

Girl, 2, eaten alive by crocodiles on family's farm in Cambodia

Watch: Crocodile emerges with missing man in jaws in Indonesia