Trump declares via Twitter the NKorea nuclear threat is over 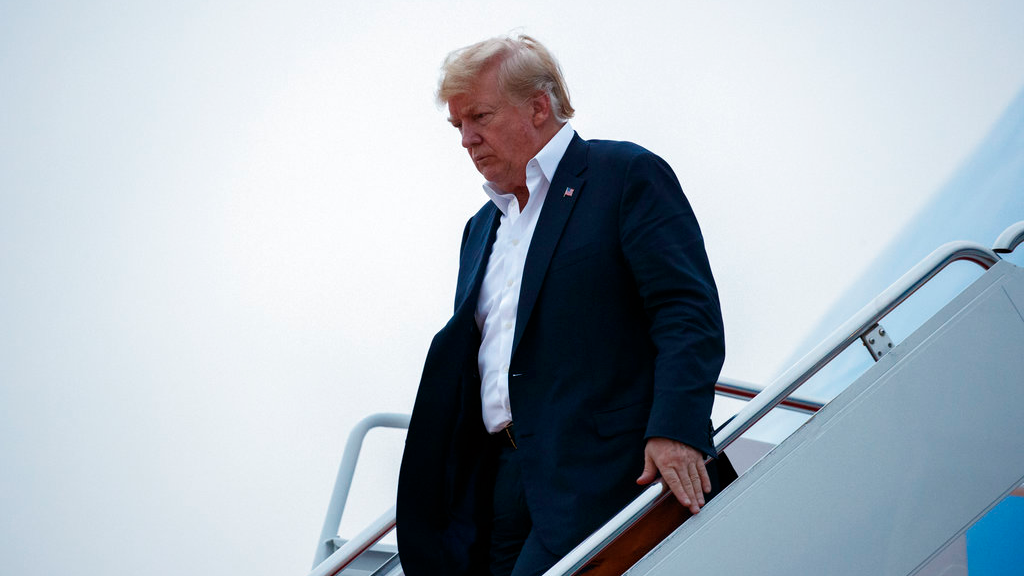 President Donald Trump declared on Wednesday that there was "no longer a Nuclear Threat from North Korea," a bold and questionable claim following his summit with leader Kim Jong Un that produced few guarantees on how and when Pyongyang would disarm.

"Just landed - a long trip, but everybody can now feel much safer than the day I took office," he tweeted. "There is no longer a Nuclear Threat from North Korea. Meeting with Kim Jong Un was an interesting and very positive experience. North Korea has great potential for the future!"

Independent experts say the North could have enough fissile material for anywhere between about a dozen and 60 nuclear bombs. Last year it tested long-range missiles that could reach the U.S. mainland, although it remains unclear if it has mastered the technology to deliver a nuclear warhead that could re-enter the atmosphere and hit its target.

And while Trump and Kim have signed a joint statement that contained a repeat of past promises to work toward a denuclearized Korean Peninsula, the details haven't been nailed down. Trump has said strong verification would be included in a final agreement, with the particulars sorted out by his team with the North Koreans next week.

"Before taking office people were assuming that we were going to War with North Korea," Trump tweeted Wednesday. "President (Barack) Obama said that North Korea was our biggest and most dangerous problem. No longer - sleep well tonight!"

When asked whether Trump was jumping the gun by declaring victory, White House counselor Kellyanne Conway told reporters: "This president wants North Korea to completely denuclearize so obviously that has to be complete, verifiable and irreversible. That will take a while."

Trump and Kim were returning to their respective strongholds following the talks — but to far different receptions.

In Pyongyang, North Korean state media heralded claims of a victorious meeting with the U.S. president; photos of him standing side-by-side with Trump on the world stage were splashed across newspapers. Trump, meanwhile, faced questions about whether he gave away too much in return for far too little when he bestowed a new legitimacy on Kim's rule and agreed, at Pyongyang's request, to end war games with Seoul that the allies had long portrayed as crucial to Asian safety.

There were worries, especially in Tokyo and Seoul, which have huge U.S. military presences, about Trump agreeing to halt U.S. military exercises with South Korea, which the North has long claimed were invasion preparations. That concession to Kim appeared to catch the Pentagon and officials in Seoul off guard, and some South Koreans were alarmed.

"The United States is our ally, so the joint military drills are still necessary to maintain our relationship with the U.S.," said Lee Jae Sung, from Incheon. "I think they will be continued for a while."

Secretary of State Mike Pompeo arrived at Osan Air Base south of Seoul from Singapore early Wednesday evening. He met for nearly an hour at the air base with Gen. Vincent Brooks, commander of U.S. Forces Korea, before heading by motorcade to Seoul.

Pompeo will meet President Moon Jae-in on Thursday morning to discuss the summit. Japanese Foreign Minister Taro Kono is also heading to Seoul and is due to meet with Pompeo and his South Korean counterpart. Pompeo, the former CIA director, then plans to fly to Beijing to update the Chinese government on the talks.

Moon has championed engagement with the North, and the agreement's language on North Korea's nuclear program was similar to what the leaders of North and South Korea came up with at their own summit in April. Trump and Kim referred back to the so-called Panmunjom Declaration, which contained a weak commitment to denuclearization but no specifics on how to achieve it.

The North suggested Wednesday that Trump had moved away from his demand for complete denuclearization before U.S. sanctions on the long-isolated country are removed.

The Singapore agreement does not detail plans for North Korea to demolish a missile engine testing site, a concession Trump said he'd won, or Trump's promise to end military exercises in the South while negotiations between the U.S. and the North continue. Trump cast that decision as a cost-saving measure, but also called the exercises "inappropriate" while talks continue.

The U.S. has stationed combat troops in South Korea since the end of the Korean War in the 1950s and has used them in a variety of drills. The next scheduled major exercise, involving tens of thousands of troops, normally is held in August.

The Pentagon said Tuesday it was consulting with the White House and others, but was silent on whether the August exercise would proceed. Defense Secretary James Mattis' chief spokeswoman, Dana W. White, told reporters he was "in full alignment" with Trump.

In Japan, the prospect of cancelled U.S.-South Korean drills was met with concern.

Man in custody after woman killed at Cap Estate