UK gov't insists suspension of Parliament was not illegal 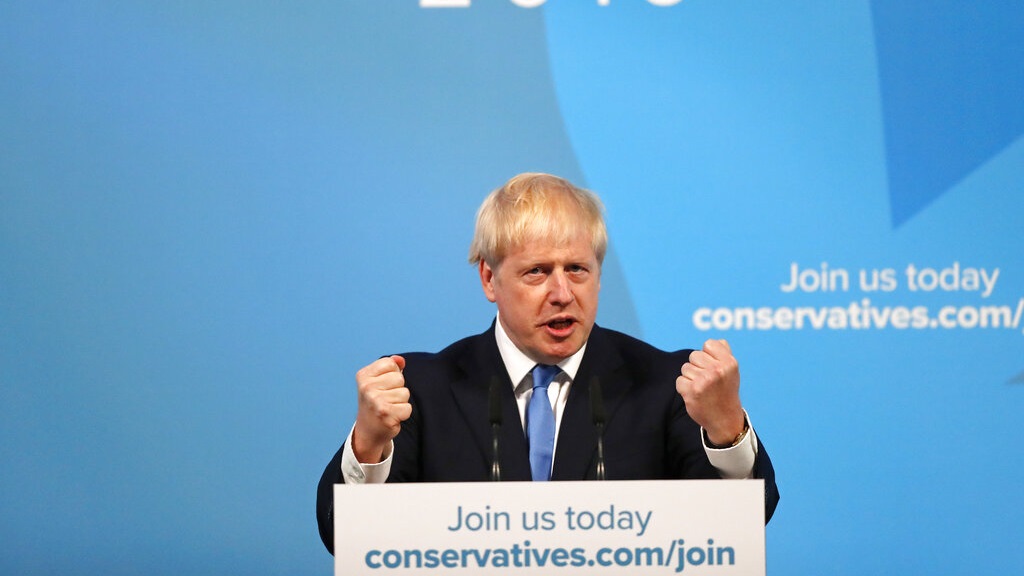 The British government was back at the country's Supreme Court on Wednesday, arguing that Prime Minister Boris Johnson's decision to suspend Parliament just weeks before the country is set to leave the European Union was neither improper nor illegal.

It's the second day of a historic three-day hearing that pits the powers of Britain's legislature against those of its executive as the country's scheduled Brexit date of October 31 looms over its political landscape and its economy.

Government lawyer James Eadie argued that a lower court was right to rule that Johnson's suspension of Parliament was a matter of "high policy" and politics, not law.

Eadie called the decision to shut down Parliament "inherently and fundamentally political in nature."

He said if the court intervened it would violate the "fundamental constitutional principle" of the separation of powers between courts and the government.

"This is, we submit, the territory of political judgment, not legal standards," Eadie said.

The government's opponents argue that Johnson illegally shut down Parliament just weeks before the country is due to leave the 28-nation bloc for the "improper purpose" of dodging lawmakers' scrutiny of his Brexit plans.

They also accuse Johnson of misleading Queen Elizabeth II, whose formal approval was needed to suspend the legislature.

Johnson sent lawmakers home on September 9 until October 14, which is barely two weeks before Britain's October 31 departure from the EU.

He claims the shutdown was a routine measure to enable his Conservative government to launch a fresh legislative agenda and was not related to Brexit.

Eadie rejected claims that the prime minister was trying to prevent lawmakers from blocking his Brexit plans.

He said "Parliament has had, and has taken, the opportunity to legislate" against the government, and would have more time between October 14 and Brexit day.

He said even if Parliament didn't come back until October 31, "there is time" for it to act on Brexit.

The prime minister says Britain must leave the EU on October 31 with or without a divorce deal.

But many economists and UK lawmakers believe a no-deal Brexit would be economically devastating and socially destabilizing.

Members of Parliament have put obstacles in Johnson's way, including a law compelling the government to seek a delay to Brexit if it can't get a divorce deal with the EU.

The Supreme Court is being asked to decide who was right. The justices will give their judgment sometime after the hearing ends on Thursday.

A ruling against the government by the 11 Supreme Court judges could force Johnson to recall Parliament.

European Commission chief Jean-Claude Juncker, meanwhile, said Wednesday that the risk of Britain leaving the EU without a divorce deal remained "very real" because Britain had not produced workable alternatives to the deal agreed upon with the EU by ex-British Prime Minister Theresa May.

That deal was repeatedly rejected by Britain's Parliament, prompting May to resign and bringing Johnson to power in July.

"I asked the British prime minister to specify the alternative arrangements that he could envisage," Juncker told the European Parliament. "As long as such proposals are not made, I cannot tell you — while looking you straight in the eye — that progress is being made."

Juncker, who met with Johnson on Monday, told members of the EU legislature in Strasbourg, France, that a no-deal Brexit "might be the choice of the UK, but it will never be ours."

The EU parliament on Wednesday adopted a non-binding resolution supporting another extension to the Brexit deadline if Britain requests it.

Any further delay to Britain's exit — which has already been postponed twice — needs the approval of the 27 other EU nations.

Johnson has said he won't delay Brexit under any circumstances — but also says he will respect the law, which orders the government to seek an extension if there is no deal by October 19. He has not explained how that would be done.