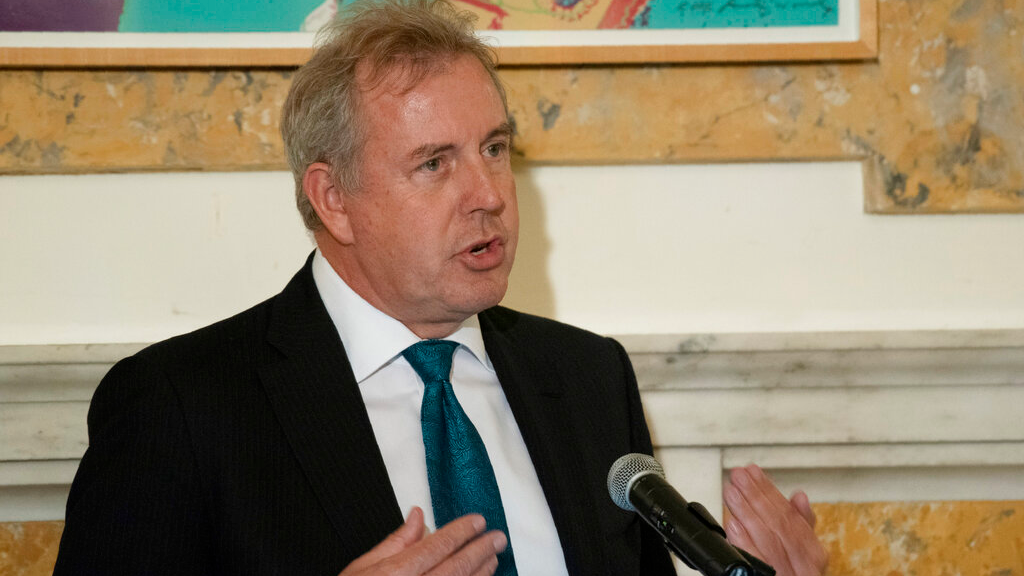 Prime Minister Theresa May backed Britain's ambassador to the United States on Tuesday after President Donald Trump cut off contact with him following the leak of diplomatic cables that branded the U.S. administration "inept."

May stood by Kim Darroch amid the controversy over the release of the documents published in the Mail on Sunday newspaper. Darroch's forthright views have created awkwardness between two countries who often celebrate having a "special relationship."

As if to underscore the snub, Darroch found himself uninvited to a White House dinner held in honor of the Emir of Qatar on Monday.

While British officials hunted for the culprit behind the leak, senior Conservative Party figure and former Foreign Secretary William Hague said the government was right to back Darroch.

"You can't change an ambassador at the demand of a host country," Hague told the BBC. "It is their job to give an honest assessment of what is happening in that country."

In a series of tweets, Trump said Darroch was "not liked or well thought of" in the U.S. and also attacked May, accusing her of "making a mess" of Britain's departure from the European Union. The comments come only weeks after Trump made a state visit to the country.

"The good news for the wonderful United Kingdom is that they will soon have a new Prime Minister," Trump tweeted. "While I thoroughly enjoyed the magnificent state visit last month, it was the Queen who I was most impressed with!"

The tweets ratcheted up the pressure on Britain's government over Darroch, who also has been accused by some Brexit-backing U.K. politicians of lacking enthusiasm for Britain's departure from the EU.

The journalist who reported the leak, Isabel Oakeshott, is a strong Brexit backer and an ally of Brexit Party leader Nigel Farage, who also is Britain's leading champion of Trump.

Trump has been supportive of Farage and once said he would "do a great job" as an ambassador to Washington.

Farage sidestepped that notion Monday, saying "I'm not a diplomat."

In the memos, Darroch, who has served as Britain's envoy to Washington since 2016, suggested that in order to communicate with the president, "you need to make your points simple, even blunt."

The cables, which cover a period from 2017 to recent weeks, suggested things in Washington weren't likely to improve.

Washington's Fourth of July to come with a twist from Trump