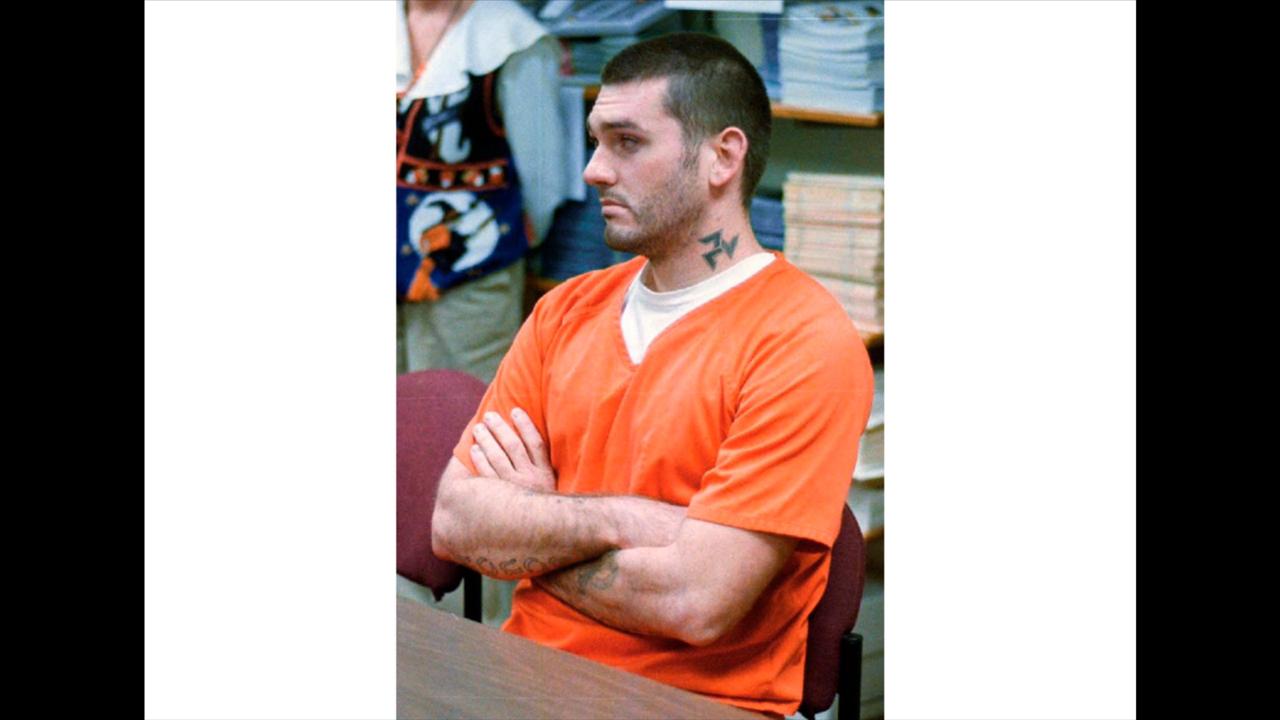 In this Oct. 31 1997 file photo Danny Lee waits for his arraignment hearing for murder in the Pope County Detention Center in Russellville, Ark. A federal judge in Indiana on Friday, July, 10, 2020, halted the first federal execution planned in 17 years scheduled three days from now over COVID-19 concerns. Daniel Lee had been scheduled to die by lethal injection

Determined to proceed with the first federal execution in nearly two decades, the Justice Department plans to appeal a judge’s ruling that would halt authorities from carrying it out on Monday.

The family of the victims in the case had requested that it be called off because their fear of the coronavirus would keep them from attending. Not that they wanted to see the killer die; they have long asked that he be given a life sentence instead, and their pandemic objection could postpone the execution indefinitely.

Daniel Lee, 47, had been scheduled to die by lethal injection on Monday. Lee, of Yukon, Oklahoma, was convicted in Arkansas of the 1996 killings of gun dealer William Mueller, his wife, Nancy, and her 8-year-old daughter, Sarah Powell.

But Chief District Judge Jane Magnus-Stinson ruled Friday that the execution would be put on hold because the family is concerned about the pandemic, which has killed more than 130,000 people and is ravaging prisons nationwide.

About an hour after the judge's ruling, the Justice Department filed its notice to appeal to the 7th U.S. Circuit Court of Appeals and filed court papers asking the district judge to stay the order pending the appeal. The 7th Circuit, based in Chicago, includes Indiana, which is where the execution was to take place at the federal prison in Terre Haute.

The Justice Department argues that it is likely to win an appeal. It contends that executions require extensive planning and coordination with other law enforcement officials and says dozens of staff members were already being brought in from other facilities ahead of Monday’s planned execution.

“These preparations cannot easily be undone,” the filing says.
Attorney General William Barr has said part of the reason the Trump administration wants to resume executions is to deliver a sense of justice to the victims' families.

But relatives of those killed by Lee strongly oppose that idea. They wanted to be present to counter any contention that it was being done on their behalf.

“For us, it is a matter of being there and saying, `This is not being done in our name; we do not want this,’” said relative Monica Veillette.

The relatives, including Earlene Branch Peterson, who lost her daughter and granddaughter in the killing, have argued that their grief is compounded by the push to execute Lee in the middle of a pandemic.

“The harm to Ms Peterson, for example, is being forced to choose whether being present for the execution of a man responsible for the death of her daughter and granddaughter is worth defying her doctor’s orders and risking her own life,” the judge wrote.

The injunction delays the execution until there is no longer such an emergency. The court order applies only to Lee’s execution and does not halt two other executions that are scheduled for later next week.

The decision to resume executions has been criticized as a dangerous and political move. Critics argue that the government is creating an unnecessary and manufactured urgency around a topic that isn’t high on the list of American concerns right now.

The family hopes there won’t be an execution, ever.

“The family is hopeful that the federal government will support them by not appealing today’s ruling, a reversal of which would put them back in the untenable position of choosing between attending the execution at great risk to their health and safety, or forgoing this event they have long wanted to be present for,” said Baker Kurrus, an attorney for the victims’ family.

The relatives would be travelling thousands of miles and witnessing the execution in a small room where the social distancing recommended to prevent the virus’ spread is virtually impossible. There are currently four confirmed coronavirus cases among inmates at the Terre Haute prison, according to federal statistics, and one inmate there has died.

“It feels disingenuous to me for someone to say they’re doing this in our family’s name and for us and no one’s taken into account our well-being and health,” Veillette said.

In an interview with The Associated Press earlier this week, Barr said he believed the Bureau of Prisons could “carry out these executions without being at risk.” The agency has put several additional measures in place, including temperature checks and requiring witnesses to wear masks.

The federal prisons system has struggled in recent months to stem the exploding coronavirus pandemic behind bars. As of Friday, more than 7,000 federal inmates had tested positive; the Bureau of Prisons said 5,137 of them had recovered. There have also been nearly 100 inmate deaths since late March.

Lee’s attorneys also sought the delay on grounds that they’ve been forced to choose between their health and adequately defending their client.

Chevie Kehoe, whom prosecutors described as the ringleader of the killers, recruited Lee in 1995 for his white supremacist organization. Two years later, they were arrested for the killings of the Muellers and young Sarah in Tilly, Arkansas, about 75 miles (120 kilometres) northwest of Little Rock. At their 1999 trial, prosecutors said Kehoe, of Colville, Washington, and Lee stole guns and $50,000 in cash from the Muellers as part of their plan to establish a whites-only nation.

Lee’s attorneys also cite evidence from his trial that Kehoe was the man who killed Sarah.

The executions appeared set to happen following a Supreme Court decision refusing to block them and a lower court affirming the ruling. It’s not clear what will happen with the other scheduled executions, which are scheduled next week for Wednesday and Friday.

Wesley Ira Purkey, of Kansas, who raped and murdered a 16-year-old girl and killed an 80-year-old woman, is scheduled to die Wednesday. Dustin Lee Honken, who killed five people in Iowa, including two children, is scheduled to be executed Friday.

Keith Dwayne Nelson, scheduled to be executed in August, was convicted of kidnapping a 10-year-old girl while she was rollerblading in front of her Kansas home, raping her in a forest behind a church and then strangling her.