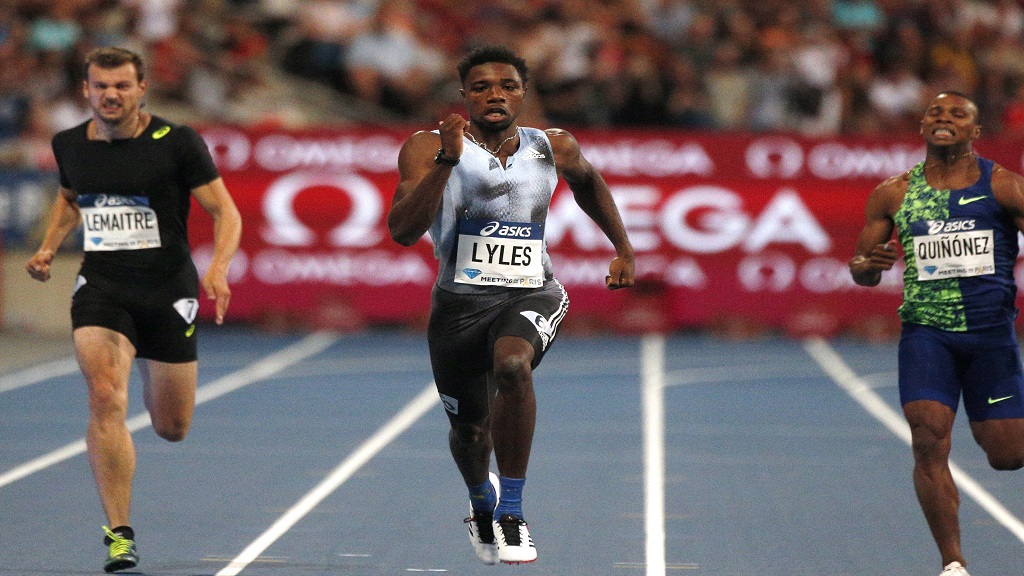 Noah Lyles of USA, center, on his way to win the men's 200 m at the IAAF Diamond League athletics meeting at Charlety Stadium in Paris, Saturday, Aug. 24, 2019. (AP Photo/Michel Spingler)

Noah Lyles of the United States set a meeting record for the 200 meters by clocking 19.65 seconds at the Diamond League in Paris on Saturday.

Lyles, nearly a half-second ahead of Turkey's Ramil Guliyev (20.01), will be hard to beat at the upcoming world championships that begin in Doha, Qatar on Sept. 27.

So will defending 400 hurdles world champion Karsten Warholm of Norway. He clocked 47.26 to beat Frenchman Ludvy Vaillant by one second at Stade Charlety.

"I've been very consistent and hitting good times," Warholm said. "Everybody is talking about a world record or it taking 46 seconds to win in Doha. But when people talk so much it has a tendency of not happening."

American Daniel Roberts won the 110 hurdles in 13.08 seconds — ahead of Spaniard Orlando Ortega (13.14) — while Will Claye leapt 18.06 meters to beat fellow Americans Christian Taylor and Omar Craddock in the triple jump.

Michael Mason of Canada won the high jump with a leap of 2.28 meters.

Thompson was well clear of Ivory Coast sprinter Marie-Josée Ta Lou (11.13), but short of her own world-leading time of 10.73 set in June.

"It's still five weeks to Doha so it's all preparation at this stage," the 27-year-old Thompson said. "I'm not 100 percent yet because it's all about the world championships. It's very important to put races like this in because it was a strong field."