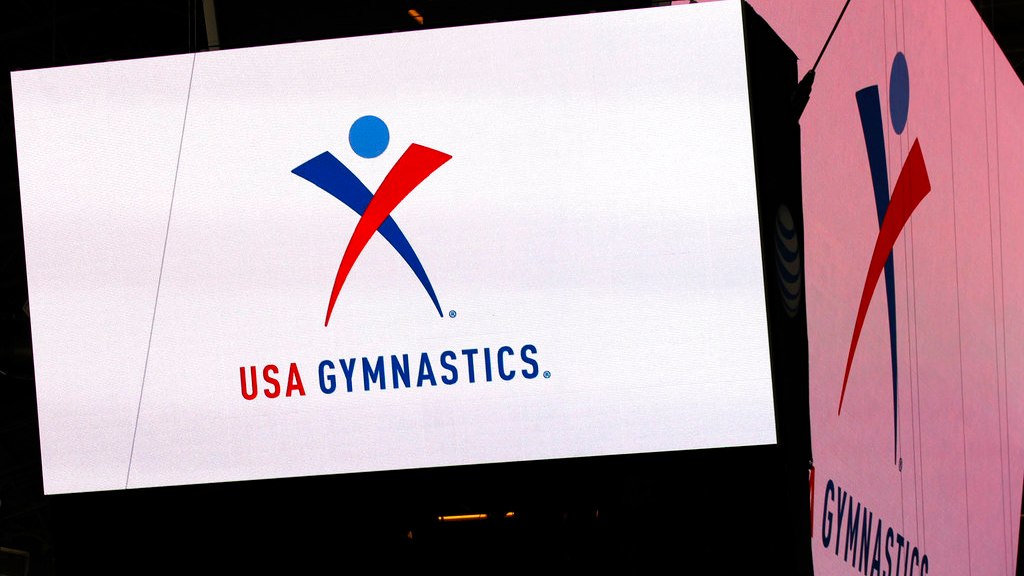 In this Feb. 26, 2014, file photo, the USA Gymnastics logo is displayed at AT&T Stadium during an news conference announcing in Arlington, Texas. (Ron Jenkins/Star-Telegram via AP)

USA Gymnastics is turning to bankruptcy in an attempt to ensure its survival.

The embattled organisation filed a Chapter 11 bankruptcy petition on Wednesday in an effort to reach settlements in the dozens of sex-abuse lawsuits it faces and to avoid its potential demise at the hands of the U.S. Olympic Committee.

Kathryn Carson, the recently elected chairwoman of USA Gymnastics' board of directors, said the organisation's goal is to speed things up after mediation attempts failed to gain traction.

"Those discussions were not moving at any pace," Carson said. "We as a board felt this was a critical imperative and decided to take this action."

The filing does not affect the amount of money available to victims, which would come from previously purchased insurance coverage, she said. Carson said the insurance companies "are aware we're taking this action and our expectation is they will come to the table and pay on our coverage."

Carson added: "This is not a liquidation. This is a reorganisation."

John Manly, an attorney representing dozens of women who have pending lawsuits against USA Gymnastics, chastised the organisation for continuing to "inflict unimaginable pain on survivors" and encouraged law enforcement officials to "redouble" their investigative efforts.

"Today's bankruptcy filing by USA Gymnastics was the inevitable result of the inability of this organisation to meet its core responsibility of protecting its athlete members from abuse," Manly said in a statement. "The leadership of USA Gymnastics has proven itself to be both morally and financially bankrupt."

USA Gymnastics insists that's not the case, stressing that the filing is based on legal expediency, not fiscal distress.

While Carson acknowledged that sponsorship is down since the first women came forward against Nassar in the fall of 2016, she described the financial condition of USA Gymnastics as "stable."

USA Gymnastics reported assets in a range of $50 million to $100 million and a similar range of liabilities, with 1,000 to 5,000 creditors. The organisation said its largest unsecured creditor is former president and CEO Steve Penny, who is owed $339,999.96. USA Gymnastics is disputing Penny's claim, though attorney Cathy Steege declined to get into the specific nature of the dispute.

Penny resigned under pressure from the USOC in March 2017. Two other presidents — Kerry Perry and former U.S. Rep. Mary Bono — have followed in what has become a revolving door amid the organisation's hierarchy.

It's that chaos at the top that led the USOC to initiate the process of removing USA Gymnastics as the sport's national governing body at the Olympic level — a step that's taken only under the most extreme circumstances.

In an open letter to the gymnastics community in November, USOC CEO Sarah Hirshland said "you deserve better," and that the challenges facing USA Gymnastics were more than it was capable of overcoming as currently constructed.

Carson said the legal maneuvering Wednesday delays the USOC's efforts to strip its designation as a national governing body.

"We always have a dialogue going with them and intend to make it clear with them we have a lot to talk about and we want to keep that going," she said.

USOC spokesman Patrick Sandusky said the committee is reviewing the filing's potential effect on decertification. "Financial stability and viability are essential for a national governing body to operate in the best interests of the athletes," Sandusky said.

USA Gymnastics believes bankruptcy protects it from having opportunities or assets taken away by a debtor. Carson acknowledged that being a national governing body "is a big part of how we raise our revenue."

Carson, who replaced Karen Golz as chairwoman last week, said she accepted the position because she believes in the direction of USA Gymnastics, which she said doesn't need money but rather time.

"We think we're changing the dynamic and we certainly believe that we will try to remain the NGB," Carson said. "To be clear, it is our lawyers' firm belief that the bankruptcy will automatically stay (decertification) ... and we will work with the USOC to regain credibility."

Nicholas Georgakopoulos, a bankruptcy expert and law professor at the Indiana University's Indianapolis campus, said USA Gymnastics is "hoping for a miracle" with its legal maneuvering.

"The USOC says you violated this relationship, here are the consequences and USA Gymnastics is saying it filed for bankruptcy, there are no consequences," Georgakopoulos said. "This is like a gambling addict who goes to the casino and gambles every day and one day the casino says you can't come anymore, you've lost too much, and addict says, I filed for bankruptcy, you can't stop me from coming to the casino."

If the USOC wants to go forward with decertification, it must now go to court.

USA Gymnastics has no timetable on how long the bankruptcy process will take and did not offer a ballpark on how much it expects to pay in settlements. Its doors, however, remain open for business.

"We are continuing to pursue all aspects of our current operating model," Carson said. "This affords us an opportunity to reorganize as well as resolve the claims with the survivors."

Progress slow for USA Gymnastics in wake of Nassar scandal