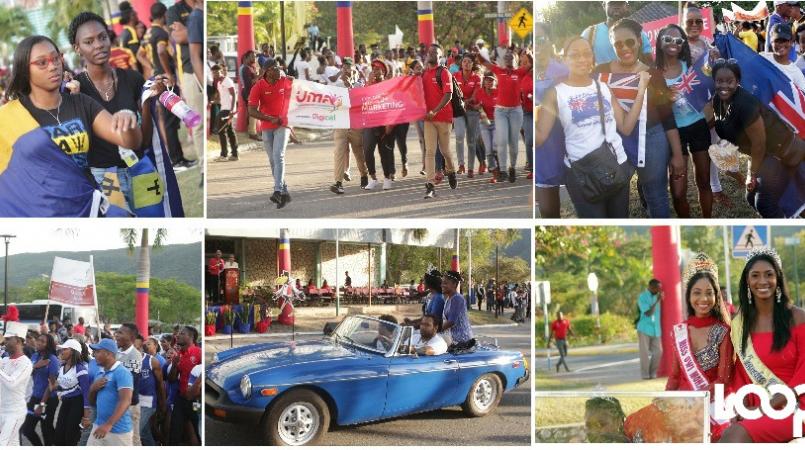 For the celebrations, the campus was transformed into a myriad of colours and activities to highlight the different people that attend the institution, as well as their interests and cultures.

The celebrations started on Sunday with the Commemoration Service at the University Chapel and culminated on Thursday, with two events - the Grand Parade and Flagraising Ceremony at Ring Road and Assembly Hall as well as the UWI Homecoming Integration at Students' Union - drawing a massive turnout that was above the expectation of the marketing department of the UWI, that organises the event.

On Friday, there was the Caribbean Day Festival of Food and Culture on the lawns of Assembly Hall while the Homecoming Honouree Public Lecture was held at the Faculty of Law.

According to Sandre Malcolm, student recruitment and marketing coordinator, responsible for student engagement, the celebrations went extremely well, especially on Thursday, when students just turned up for the parade and flagraising ceremony.

He attributed some students' gripe about last year's event being managed much smoother to the unexpected turn out.

"I mean, we had a few minor hiccups as we went later than we expected, but that was because we had a bigger turn out than we expect. What happened was that we put a structure in place and we had a bigger turnout as the students just saw the vibes and showed up at the last minute and we didn't want to turn them down. That is why we just implemented them into the parade," Malcolm said.

According to Malcolm, with the theme "reigniting the pelican flame", the organisers wanted to have the students have fellowship in the different ways that they do on the campus.

He said, "one of the things we wanted to do was to put to the forefront the pride of the students. Pride in either their faculties, their halls, their clubs or societies.

"These are the groups that they associate with. While they associate with the larger university, they really love their small groups and we wanted to ensure that that was at the forefront of homecoming. That's what we are celebrating, the pride that they have. And we just ask them to come and show that pride."

He said organisers wanted the students to understand that the University have a number of different cultures within its borders and the activities were geared with that in mind.