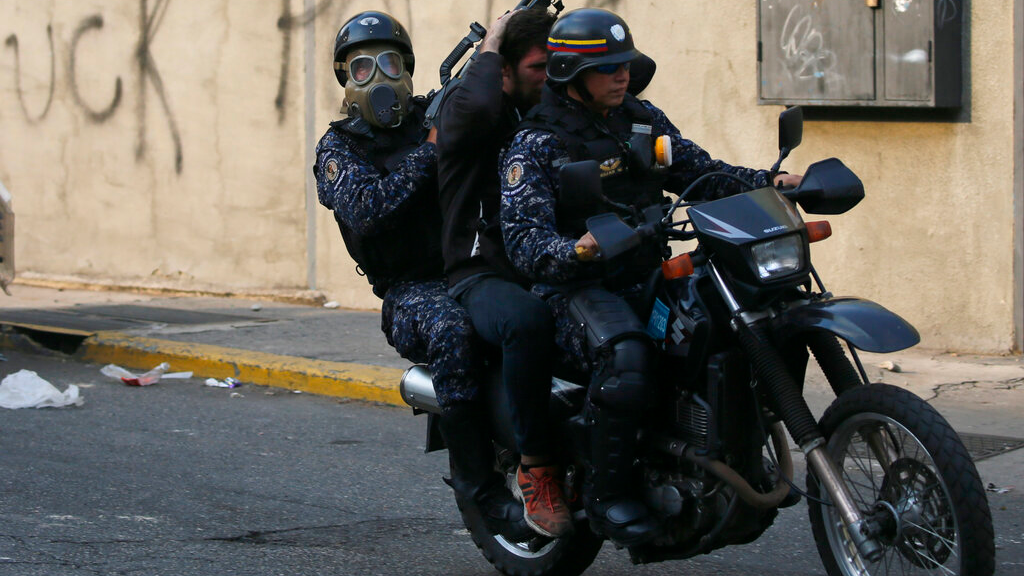 Venezuela's foreign minister says the country may expand the presence of Russian military specialists there, as Moscow and Washington accuse each other of interfering in the country's crisis.

Russia has had deep military cooperation with Venezuela over the years, including supplying weapons and aircraft. It sent military advisers to the troubled South American nation this year as tensions grew over opposition leader Juan Guaido's attempts to oust President Nicolas Maduro.

Foreign Minister Jorge Arreaza spoke in Moscow on Monday, a day after meeting Russia's top diplomat Sergey Lavrov, who is to meet U.S. Secretary of State Mike Pompeo later in the day.

Arreaza told reporters "at present, there is a commission of (Russian) specialists in Venezuela, it could be expanded."

Opposition leader Juan Guaidó was unable to attend because of meetings, a representative told the crowd at the vigil. He did not elaborate, though he noted that some members of the opposition-controlled National Assembly were at the memorial service. A few police officers watched from a distance.

Some of those who gathered waved Venezuelan flags and chanted "Freedom," but the mood was muted after the major setback for the opposition in its long campaign to topple President Nicolás Maduro.

"A lot of people have had faith in the political process, which hasn't brought results, or at least the results that we want," he said.

The U.S.-backed Guaidó declared himself interim president in January, saying Maduro's re-election last year was rigged and one in a series of increasingly authoritarian steps since he replaced the late Hugo Chávez in 2013 as president. Venezuela, meanwhile, has been in sharp decline for years, suffering from hyperinflation and shortages of food and medicine that the opposition blames on state corruption and mismanagement by the socialist administration.

For his part, Maduro says U.S. sanctions aimed at forcing him from power are taking a toll on the economy, and his government has accused Guaidó of fomenting violence when he appealed to the military last week to switch sides to the opposition. The armed forces did not heed the call, and those killed in ensuing clashes between police and protesters on Tuesday and Wednesday included two teenage boys.

Maduro's government has not moved to arrest Guaidó, possibly reflecting its own weakness in the face of intense U.S. pressure not to move against the opposition leader.

Also Sunday, Venezuelan authorities were investigating the cause of a helicopter crash that killed seven military officers while they were while heading to a state where Maduro was visiting troops.

The Cougar helicopter crashed on the southeastern outskirts of Caracas on Saturday. The armed forces said the chopper was heading to San Carlos in Cojedes state, near a military base where Maduro addressed cadets.

In late April, a Venezuelan National Guard general and a pilot died in a police helicopter crash in the city of Maracaibo.

U.S. Secretary of State Mike Pompeo on Sunday said ABC's "This Week" program that he planned to meet Russian Foreign Minister Sergey Lavrov soon to discuss U.S. concerns that Russian support for Maduro is fueling the political and humanitarian crisis in Venezuela. Russia, in turn, has accused the United States of aggressively interfering in Venezuela's affairs.

U.S. officials are working to provide President Donald Trump with "a full-scale set of options; diplomatic options, political options, options with our allies, and then ultimately, a set of options that would involve use of U.S. military," Pompeo said.

Lavrov met with Venezuela's foreign minister, Jorge Arreaza, in Moscow on Sunday and said afterward that he hoped U.S. talk of a military option does "not reflect the intentions" of Trump.

"We call on both the Americans and those who support them to drop irresponsible plans," the Russian foreign minister said.