VIDEO: Kane back in Spurs training ahead of schedule 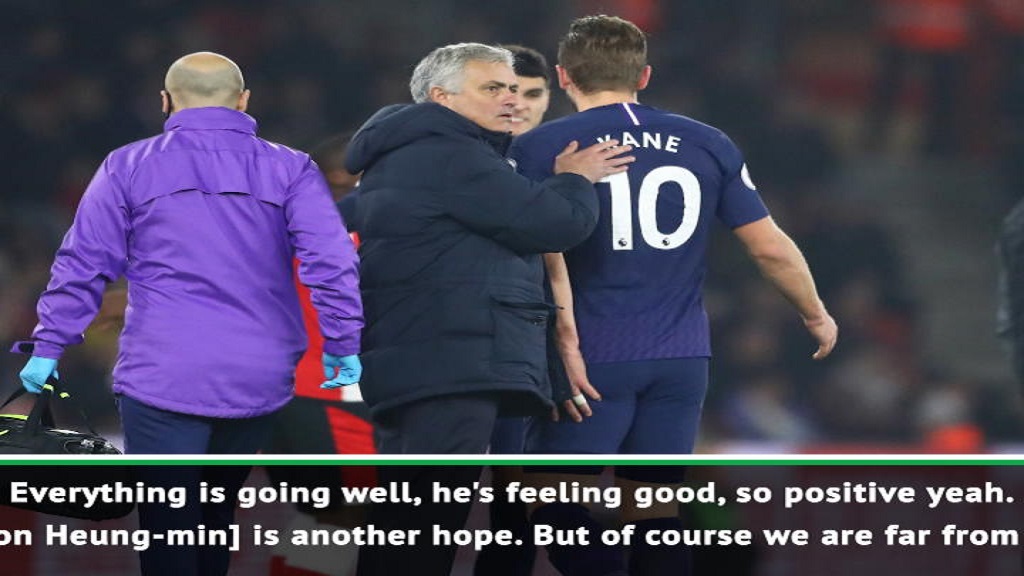 Jose Mourinho has confirmed Harry Kane's recovery from surgery on a hamstring injury is going better than expected after the striker made his return to Tottenham training.

Kane sustained the injury on New Year's Day during a defeat to Southampton, and the issue required him to have an operation.

It was initially thought Kane would be out until April, before Mourinho suggested May 9 was a more realistic date for his return when Spurs are scheduled to face Leicester City on the season's penultimate matchday.

But Kane began "on-field rehabilitation" on Friday, and Mourinho is now optimistic about potentially having the England captain back in contention a little earlier – though he stopped short of setting another date as a target.

"I would say a little bit ahead [of schedule]," Mourinho said of Kane's return to training.

"It gives me a hope of, instead of [only being able to play] one or two matches [at the end of the season], [he may play] three, four or five.

"I don't know - I'm just speculating a little bit - but the feelings are good. He's doing what he can do at this stage but always with a good feeling.

"Sometimes [players] follow protocol and [suffer] some setbacks because of not the best feeling on this action or that movement, but everything is going well. He's having very good feelings. So, I'm positive.

"When he was injured, I told you I will forget him, then I told you [he could play] one or two games - Crystal Palace or Leicester.

"At the moment, I have better hopes than that, so hopefully that feeling is right and he can help us in the last part of the season.

"Of course, in the club, people know him much better than I do. Every time he has a problem, he's the kind of guy that doesn't accept protocols, a date, a fixture. He always tries to go ahead.

"He's the kind of guy that we have a very good control and communication. Sometimes the players break protocol and come back earlier than expected. It happened with Hugo [Lloris], who played a couple of weeks before we could expect.

Mourinho was similarly optimistic about the return of Son Heung-min, who broke his arm against Aston Villa and also required surgery, leading the Spurs boss to effectively rule him out for the rest of the season.

Now Tottenham hope he could also be in contention for the latter stages of 2019-20, but first the club must follow the government's coronavirus safety protocols, with Son soon expected to return from a trip to South Korea.

"That's a hope but we're far from it," Mourinho said of Son potentially returning early. "He's coming back soon [to the UK] and we have to follow safety protocols, then we'll look at all the possibilities.

"I cannot imagine when, but there's a good chance that before the end of the season we have Harry and Son playing together."