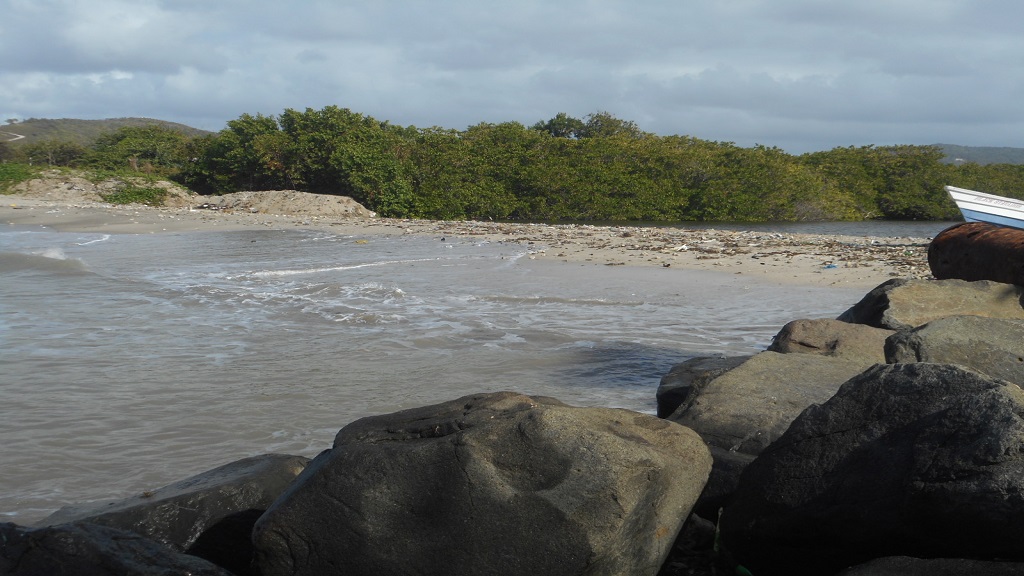 The general area where the recent sand mining took place

Residents of areas such as Bacaderre, West Side and St Louis Street in Vieux-Fort say since the recent sand mining at a beach in Vieux-Fort for work on the Desert Star Holding (DSH) horse racing site, the risk of their properties being damaged during heavy and persistent rain has increased.

Last month, residents of those areas watched in dismay as excavators dug the beach near the mouth of the river and dumped sand in huge trucks, which they took away.

They say the recent sand mining has resulted in some of the rocks which were placed along a section of the beach several years ago to prevent the sea from entering homes of residents have now been exposed, and the distance between the sea and the river has narrowed with a large quantity of sand accumulating between them.

“Since they took the sand from the area, vehicles are no longer able to drive between the sea and the river to the highway… right now, the sea has gotten closer to the river,” Errol Joseph, a resident of the area told Loop News.

He added that the recent sand mining in the area took place from the afternoon to the evening.

Mavis Mc Farlane, who lives close to where the recent sand mining took place, said her house is always in danger when there is flooding in the area.

She said sand mining in the area is of much concern to her, adding that what happened recently should have never been allowed.

According to Mc Farlane, there has been illegal sand mining in the area in the past but she has never seen so much sand taken from the beach like what she saw recently.

Another resident lamented that right now the safety of their homes are compromised, adding that heavy and persistent rain can easily cause damages to their properties.

Whenever there is flooding in the area, residents are forced to use sandbags to save their homes from being damaged by the raging water.

The concerns of the residents as it relates to the recent sand mining in the area was also raised by the parliamentary representative of Vieux-Fort South, and former prime minister, Dr Kenny Anthony on his Facebook page.