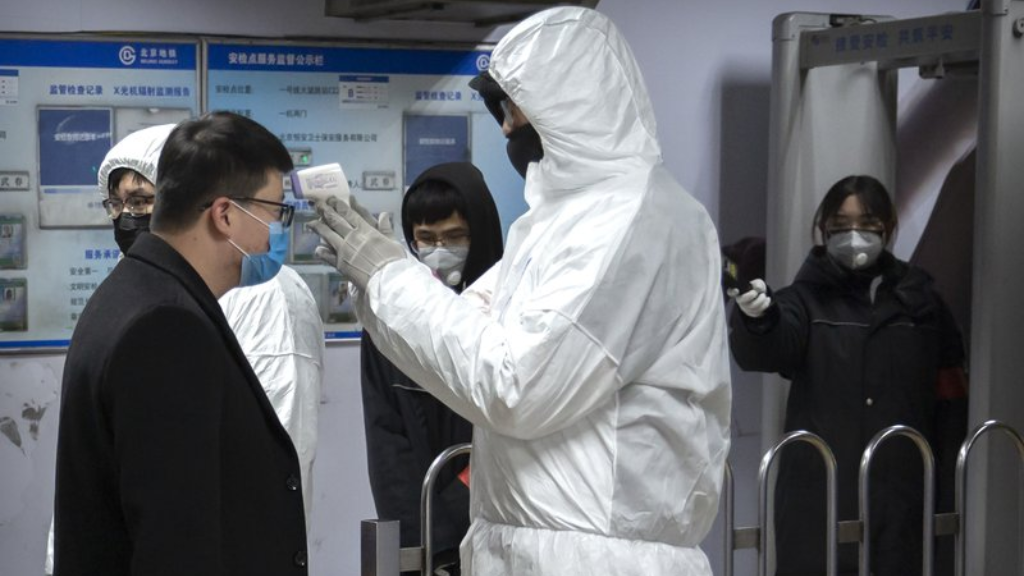 Countries began evacuating their citizens Wednesday from the Chinese city hardest-hit by a new virus that has now infected more people in China than were sickened in the country by SARS.

(Video: Tokyo governor vows to contain coronavirus before the 2020 Olympics)

The death toll rose to 132, which is still lower than the 348 people who were killed in China by SARS. Scientists say there are still many critical questions to be answered about the new virus, including just how transmissible and severe it is.

A Japanese flight that brought back evacuees from the city of Wuhan included four passengers with coughs and fevers. Two were diagnosed with pneumonia.

The three men and one woman were taken to a Tokyo hospital in separate ambulances for treatment and further medical checks. Another woman developed nausea at the airport and was also hospitalized.

It wasn't immediately known whether they were infected with the new type of coronavirus, which first appeared in Wuhan in December. Its symptoms, including cough and fever and in severe cases pneumonia, are similar to many other illnesses.

China's latest figures added 26 deaths, all but one in Hubei province and its capital, Wuhan. The number of cases rose 1,459 from the previous day, a smaller increase than the 1,771 new cases reported on Monday. More than 50 infections have been confirmed abroad.

The United Arab Emirates, home to long-haul carriers Emirates and Etihad, reported its first cases on Wednesday in members of a family who had come from Wuhan, the state-run news agency reported. It wasn't immediately clear how many family members were involved.

British Airways announced it was immediately suspending all flights to and from mainland China after the U.K. government warned against unnecessary travel to the country. BA said in a statement Wednesday that "we apologize to customers for the inconvenience, but the safety of our customers and crew is always our priority." The airline operates daily flights from London's Heathrow Airport to Shanghai and Beijing.

British health secretary Matt Hancock tweeted that "anyone who returns from Wuhan will be safely isolated for 14 days, with all necessary medical attention." The measures are a step up from what the country did during the devastating 2014 Ebola outbreak, when returning travelers from West Africa were asked to monitor themselves for symptoms.

Mark Woolhouse, a professor of infectious disease epidemiology at the University of Edinburgh, said the measures are justified for public health reasons.

"Those are the sorts of measures that will protect countries from the introduction of the virus and onward transmission," he said. "There's always a balance between the draconian measures of public health and what people might want to do, and obviously it's regrettable if people who turn out not to have the virus are quarantined unnecessarily."

The outbreak has also affected international sporting events, with the International Hockey Federation postponing Pro League games in China, and qualifiers for the Tokyo Olympics scheduled in February in soccer, basketball and boxing being moved outside of the country. With just 177 days before the summer games, Tokyo organizers are on edge over the outbreak's possible knock-on effects.

In Australia, health officials said the Chinese women's national soccer team was quarantined in the city of Brisbane over concerns it had passed through Wuhan a week ago.

The team will be kept in isolation in a hotel until Wednesday next week. None of the group of 32 players and staff has shown symptoms.

Chartered planes carrying evacuees home to Japan and the United States left Wuhan early Wednesday as other countries planned similar evacuations from areas China has shut down to try to contain the virus. The lockdown of 17 cities has trapped more than 50 million people in the most far-reaching disease control measures ever imposed.

A plane carrying Americans who had been in Wuhan left for Anchorage, Alaska, where they will be re-screened for the virus. US hospitals are prepared to treat or quarantine people who may be infected. After departing Alaska, the plane is to fly to Ontario, California.

At the Tokyo airport, Takeo Aoyama, an employee at Nippon Steel Corp.'s subsidiary in Wuhan, told reporters he was relieved to be able to return home.

"We were feeling increasingly uneasy as the situation developed so rapidly and we were still in the city," Aoyama said, his voice muffled by a white surgical mask.

The Tokyo Metropolitan Government confirmed the condition of the four ill passengers after the flight of 206 Japanese evacuees arrived. They were taken in separate ambulances to a Tokyo hospital for treatment and further health checks.

All of the passengers had their temperatures checked before boarding and on the plane, and plans had been made for all of the evacuees to be treated and quarantined depending on their test results.

Among those remaining in Wuhan was Sara Platto, an Italian animal behavior researcher and veterinarian, and her son, Matteo.

"My son turned 12 on January 23, the first day of the lockdown in Wuhan. So he couldn't invite his friends over. We had a remote birthday celebration, with people 'visiting' him over Wechat," Platto said, referring to China's Twitter-like messaging app. "We called it the epidemic birthday."

Platto said there were 25 Italians stuck in Wuhan, some students, some very young, who stay in touch online for material and emotional support. She has used her scientific background to offer advice and debunk sensational false news, reminding friends to wash their hands and faces often.

As much as panic, people spending most of their times indoors have to deal with boredom.

Matteo usually has a very busy agenda between his school, sports, and volunteer work, but now "it's like suddenly everything has slowed down," Platto said. As with other international schools, classes are moving online until the all-clear is sounded.

"We have most of what we need for now. I think it's a serious situation, but we are not in zombie land," she said.

Several countries have confirmed cases of the virus, with most of them being Chinese visitors, people who visited Wuhan or family members in close contact to the sick. Japan's six confirmed cases include a tour bus driver who drove visiting groups from Wuhan. Germany says four workers at an auto parts company possibly were infected when a colleague from Shanghai visited.

Australia and New Zealand were the latest countries planning evacuations. Both countries also stepped up their travel advice to China, as did Britain.

Experts have feared travel during the Lunar New Year holiday would enable the further spread of the virus, and China expanded the holiday to keep people home, closing schools and offices to try to contain it.

Hong Kong was preparing to cut rail service from China at midnight.

Wuhan is building two hospitals in a matter of days to add 2,500 beds for treatment of patients with the virus.

The new virus is from the coronavirus family, which includes those that can cause the common cold as well as more serious illnesses such as SARS and MERS.

The source of the virus and the full extent of its spread are still unknown. However, the World Health Organization said most cases reported to date "have been milder, with around 20% of those infected experiencing severe illness."

Scientists say there are still many critical questions to be answered about the new virus, including just how transmissible it is. Although the Chinese health minister and others have suggested that the virus is spreading before people get symptoms, data to confirm that has not yet been shared widely beyond China.

"It's still unclear whether that takes place," said Malik Peiris, chair in virology at the University of Hong Kong. If such spread is occurring, however, that might explain why China has already exceeded the case numbers for SARS. "The fortunate thing about SARS, if there was anything fortunate, was that transmission did not take place before symptoms," he said. Peiris said that if it turns out that the new coronavirus can indeed be spread by people who don't show any symptoms, "a pandemic is a scenario that we have to consider."