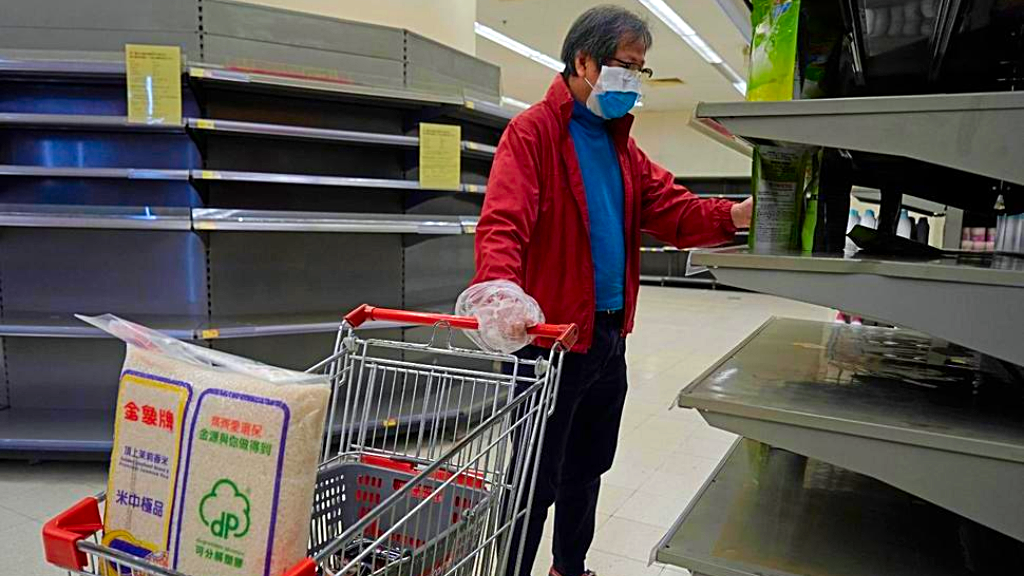 A man wearing face mask and plastic bag as a glove walks past empty shelf of tissue papers at a supermarket in Hong Kong, Friday, Feb. 7, 2020. In recent days, residents have been buying large amounts of products because they fear that border restrictions, which were enforced to control the coronavirus outbreak, may affect supply flows into Hong Kong. (AP Photo/Kin Cheung

Barren supermarket shelves and signs reading "out of stock."

Widespread panic-buying of essentials such as toilet rolls and rice has hit in Hong Kong, a knock-on effect of the virus outbreak in mainland China.

Despite government assurances that there is no need for worry, panicked Hong Kong shoppers fear the city's efforts to combat the virus' spread could cause shortages of necessities.

Shoppers lining up Friday at a pharmacy in central Hong Kong to buy tissue paper said they felt compelled to stock up.

"I have friends who couldn't get hold of it, so I am helping them to buy it," said one of the buyers, an accountant who gave just her surname, Yeung. "But I don't know why there are rumours saying that there is no tissue paper, so everyone is worried."

The lines outside shops and the emptying of shelves come despite the government's insistence that its virus-control measures won't disrupt cross-border freight from mainland China, which supplies much of Hong Kong's perishables and other essentials.

A government statement Wednesday blamed panic-buying on "the malicious act of spreading rumours when the city is fighting against the disease."

"There is no shortage of food. There are sufficient stocks of staple food including rice and pastas. There is no need for the public to worry," it said.

The Hong Kong Food Council similarly said virus-control measures haven't had a major impact on supplies of rice, vegetables and other staples.

The government plans to quarantine all people arriving from the mainland for 14 days but has left open two land border checkpoints.