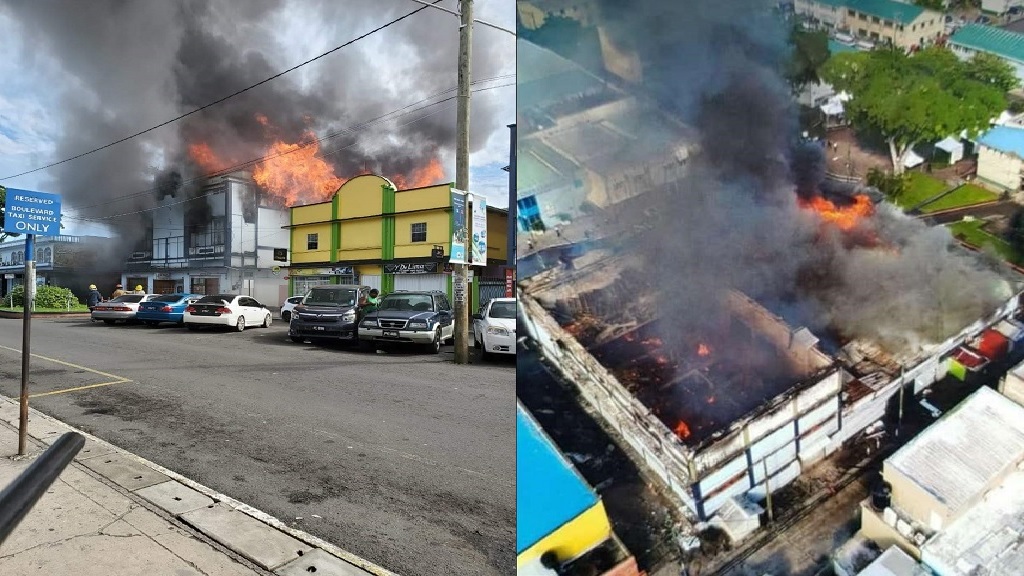 Antoine said that fire officers responded to a call at approximately 1.22 pm on Thursday and were unable to gain access to the building upon arrival, causing the fire to spread through the entire structure. He said there were three major challenges in what he called a very difficult operation:

1. Accessibility. The business establishments were locked and there was no way to gain access to the area of origin of the fire.

2. The building was old and consisted of a wooden floor which collapsed as the fire burned, causing the need to intermittently withdraw firefighters to prevent injuries or fatalities.

3. There was a lot of combustible material in the building including a large propane gas tank in the restaurant and textiles in stores.

Given the circumstances, he believes responders, including police, did a very good job and must be commended in carrying out a massive operation in which no injuries or loss of life occurred.

According to Antoine, the institution of early alarm systems for businesses and the establishment of building codes with the involvement of the fire service would significantly improve outcomes.

The early alarm systems would help to get responders to the scene more quickly, potentially before fires become difficult to navigate and contain. The building codes would arm responders with knowledge of the layouts of buildings so as to enable them to approach fires with a strategic advantage in terms of knowing how to best get in and out.

Antoine says that an internal debriefing will be done by the fire service to assess what external factors or potential personal gaps affected the outcome in order to improve their approach going forward.

Antoine also dispelled what he called a myth about the fire service and access to water. He made it clear that they had access to water from the sea pump and that there is no way that they respond to any scene without water.

Francis: We will miss 'historic' Voyager building very much