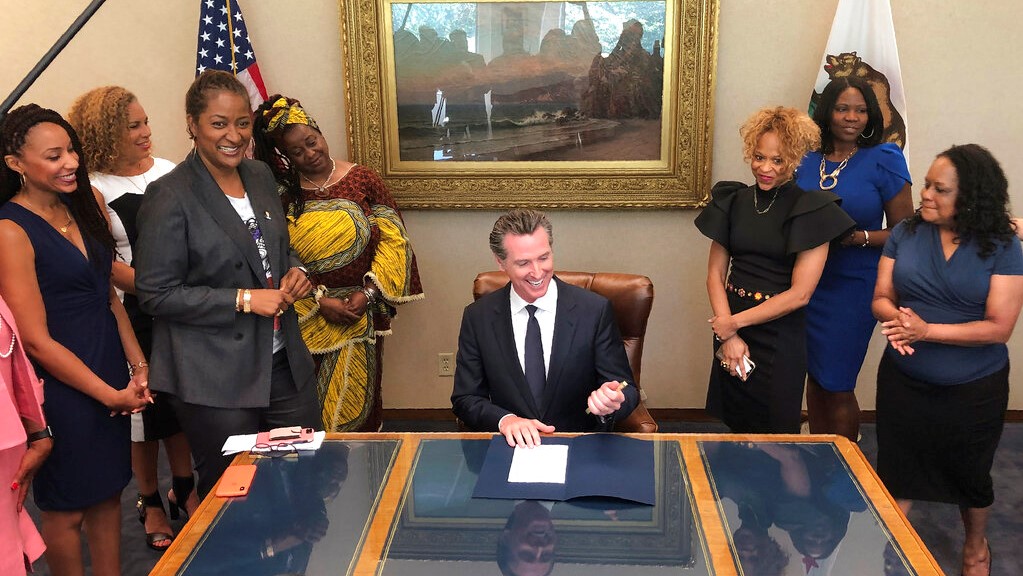 Gov. Gavin Newsom signed into law Wednesday a bill making California the first state to ban workplace and school discrimination against black people for wearing hairstyles such as braids, twists and locks.

The law by Democratic Sen. Holly Mitchell of Los Angeles, a black woman who wears her hair in locks, makes California the first state to explicitly say that those hairstyles are associated with race and therefore protected against discrimination in the workplace and in schools.

"We are changing the course of history, hopefully, across this country by acknowledging that what has been defined as professional hairstyles and attire in the workplace has historically been based on a Euro-centric model — based on straight hair," Mitchell said.

Stephanie Hunter-Ray, who works at a makeup counter, says she typically wears her hair braided or in an afro, but one day she showed up to work with it straightened and styled in a bob. Her manager told Hunter-Ray her hair had never looked so normal.

"It bothered me," Hunter-Ray said in an interview at the hair salon she owns in Sacramento that specializes in natural hairstyles. "What do you mean by 'normal?' Your normal is not my normal. My normal is my 'fro or my braids."

Alikah Hatchett-Fall, who runs Sacred Crowns Salon in Sacramento, said she's had black men come into her salon asking to have their hair cut off because they can't find jobs.

California's new law, which takes effect January 1, is significant because federal courts have historically held that hair is a characteristic that can be changed, meaning there's no basis for discrimination complaints based on hairstyle. The U.S. Supreme Court recently declined to hear the case of an Alabama woman who said she didn't get a job because she refused to change her hair.

The issue burst into public view last December when a black high school wrestler in New Jersey was told by a referee that he had to cut off his dreadlocks if he wanted to compete. California's Democratic governor said the video was a clear example of the discrimination black Americans face.

"His decision whether or not to lose an athletic competition or lose his identity came into, I think, stark terms for millions of Americans," Newsom said before signing the bill alongside Mitchell and half a dozen advocates. "That is played out in workplaces, it's played out in schools — not just athletic competitions and settings — every single day all across America in ways subtle and overt."

Though California is the first state with such a law, New York City earlier this year issued legal guidance banning discrimination against someone based on their hairstyle. The beauty company Dove is part of a coalition pushing for more hairstyle protections, and Mitchell said she hopes other states follow California.

The term locks, or "locs," is the preferred term to dreadlocks, which has a derogatory connotation.

At Hunter-Ray's studio, Exquisite U, on Wednesday, her stylists and customers reflected on the new law.

Shereen Africa, who was having her hair re-braided by Elicia Drayton, said she used to work at a television station in Mississippi where a black anchor quit after facing resistance to wearing her hair in locks. Africa said she did not wear her hair in braids at the job, even though she wasn't on air, because the environment wasn't supportive of it.

"If I'm in a professional setting, I won't wear my hair in certain ways," she said.

An anchor at a different Mississippi TV station made national news when she said she was fired after she stopped straightening her hair.

"You want to go to work and feel free," Drayton said. "You don't want to have to feel like you have to put on a wig or you have to have your hair straight to please someone else."

New York City to ban discrimination based on hair