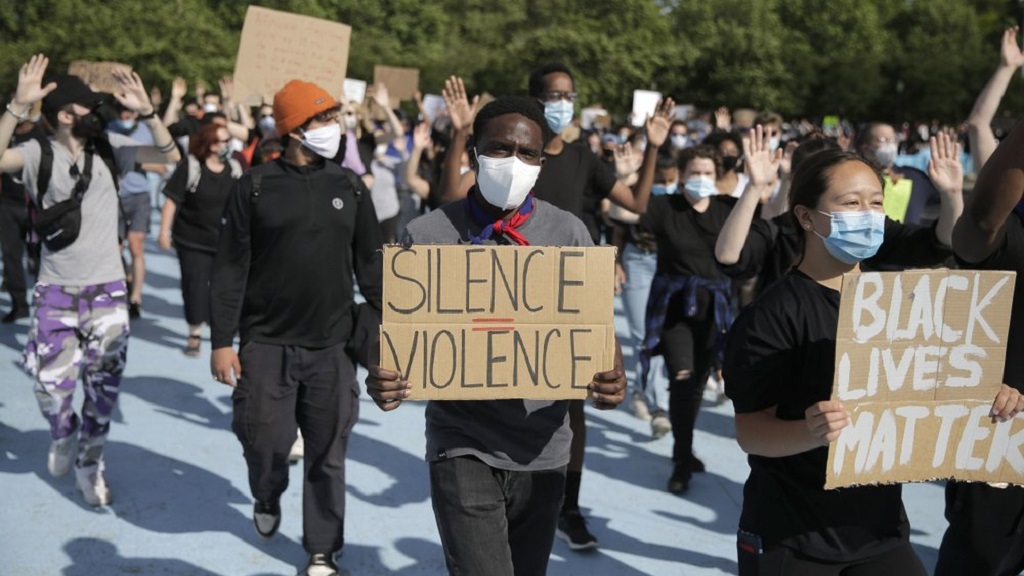 Protesters march a large sculpture of a globe in Flushing Meadows Corona Park in the Queens borough of New York, Sunday, May 31, 2020. Demonstrators took to the streets of New York City to protest the death of George Floyd, a black man who was killed in police custody in Minneapolis on May 25. (AP Photo/Seth Wenig)

A fourth day of protests against police brutality kept New York City on edge Sunday, as thousands of people marched and many protesters and officers tried to keep the peace after days of unrest that left police cars burned and hundreds of people under arrest.

Demonstrators paraded through multiple neighbourhoods, chanting, kneeling in the street, and falling silent for a minute in front of the neon-adorned NYPD station in Times Square in honour of people killed by police.

Through most of the day, in most of the city, a tense truce held, with officers keeping their distance and occasionally dropping to a knee in a gesture of respect.

But after dark, there were ugly confrontations. Demonstrators in downtown Brooklyn and parts of Manhattan pelted officers with objects and set fires.

Officers charged into crowds to clear streets, sending people sprawling and battering bystanders who couldn't get out of the way.

Early Monday morning in Manhattan's Soho neighbourhood, mobs of people rampaged down the sidewalks, smashing into numerous luxury shops to steal merchandise. Hundreds of people marauded through the area, breaking into Rolex, Chanel and Prada boutiques as well as clothing and electronics stores.

One person was shot amid the chaos and was being treated in an ambulance.

Small fires burned in the streets, which were covered with glass and garbage. Police appeared overwhelmed and incapable of stopping the destruction.

Earlier in the day, Mayor Bill de Blasio had rejected the idea of a curfew, like those adopted in other major US cities.

The Democrat credited police for "tremendous restraint," but appointed two city officials to review incidents caught on video, including an officer ripping a man's mask off to spray his face with a chemical and two police cruisers lurching into a crowd of demonstrators in Brooklyn.

Since the protests began days ago, at least 790 people have been arrested, 33 officers have been injured and 27 police vehicles have been damaged or destroyed, police said. There were no major injuries reported.

The mayor's daughter, Chiara de Blasio, 25, was among those arrested Saturday night, according to a law enforcement official who spoke on condition of anonymity because of the sensitivity of the matter.

The arrest report, obtained by the New York Post, said she refused to leave a Manhattan street cleared by officers because people were throwing things. Chiara de Blasio, who is black, was later given a court summons and released.

The mayor, who is white, didn't mention the arrest at his press briefing Sunday. City Hall spokespeople didn't immediately comment.

Demonstrators marched throughout the city. At a plaza in downtown Brooklyn, hundreds chanted "No justice, no peace," outside the Barclays Center, where the NBA's Nets play.

Marchers chanted "Hands up, don't shoot" — a rallying cry that originated from the August 2014 shooting of Michael Brown in Ferguson, Missouri — during a separate, peaceful rally in Queens.

In Manhattan, hundreds of people knelt on Fifth Avenue.

Around the city, there were gestures from police officers intended to show sympathy with marchers. A few clapped along with protesters in Manhattan. In Queens, officers knelt with protesters in an intersection as an organizer called out the names of people killed by police.

Outside the Barclays Center, two commanders, urged by the crowd to "drop a knee," did so. But minutes later a small group rushed at a nearby shopping mall, and officers charged into the crowd, beating people with batons in a chaotic scene.

Still, until late, the day's mood was more peaceful than Saturday, when marches devolved into numerous clashes between police and protesters and demonstrators set police vehicles on fire and scrawled graffiti on Manhattan's famed St. Patrick's Cathedral.

At a briefing Sunday, the department's top intelligence and counter-terrorism official, John Miller, said some anarchist groups gathered supplies of rocks and bottles and used scouts to spot vandalism targets.

New York City lawyers, one of whom went to Princeton, the other to New York University Law School, were hit with federal charges that they threw a Molotov cocktail into an unoccupied patrol car Saturday.

Similar protests flared around the nation in response to the Minnesota death of George Floyd, a black man who died Monday after a white Minneapolis police officer pressed his knee on his neck.

Elsewhere in New York, hundreds of people helped clean up Sunday after shop windows were shattered and vehicles torched in Rochester and Albany and Buffalo.

Governor Andrew Cuomo said the National Guard is on standby and that hundreds of additional troopers were made available to upstate cities.

"It isn't the protesters who need curfews, it's the police. There is no excusing the police terror we have seen this weekend against protesters," said NYCLU Executive Director Donna Lieberman.

At least five burned-out NYPD vehicles that remained near Manhattan's Union Square were towed Sunday. People walked around broken glass on the street to take pictures. But for hours, Sunday's protests were calm.

"Compared to how things turned out yesterday, this is a lot better. This is exactly how things should be," said Domenic Manning, who spoke at a rally in Union Square. "If you want to get your point across, this is the way to do it. Vandalizing companies and stores, that's not the way to do it."

Neighborhood resident Ken Kidd said protesters and police tried to remain peaceful at the start before the stress of a city heavily hit by the coronavirus came out Saturday night.

"I think a community can only say 'Enough' so many times and the words aren't heard so then they got to take action and that's what happened last night," Kidd said.

Watch: Calls in Paris for protest over Floyd, Traore