Watch: Drama in Pt Fortin as car pushed into river 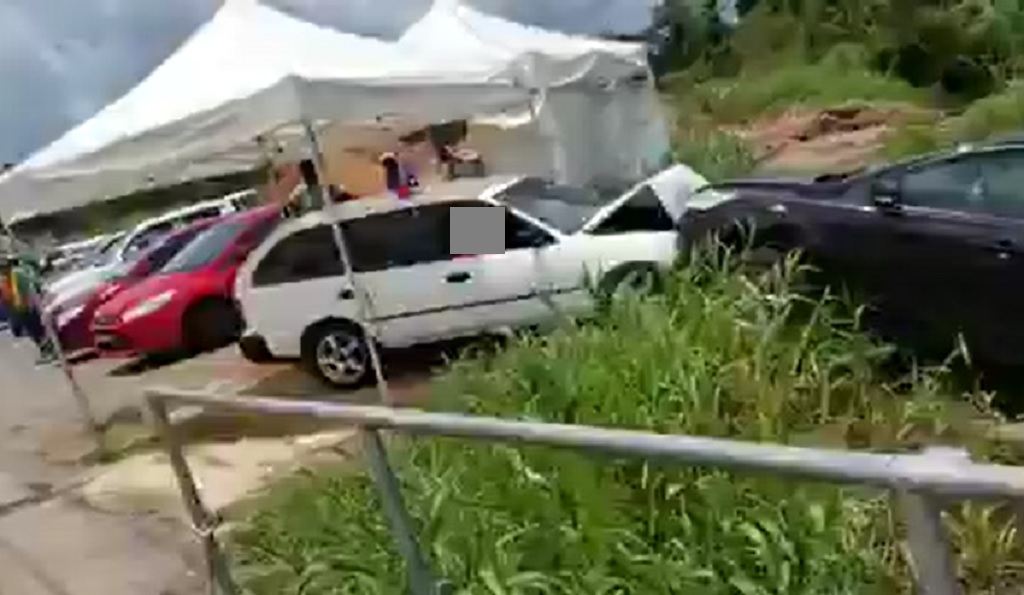 A bizarre video showing a car being rammed by another car and pushed into a river was shared online, raising a flurry of questions.

The video, which was shared via Whatsapp and Facebook, showed a white station wagon ramming into another car repeatedly until the car was pushed into a nearby waterway.

A reliable source confirmed the incident took place near the site of the Point Fortin Hospital which is currently in progress. The incident was said to have taken place earlier this week.

A source from Urban Development Corporation of Trinidad and Tobago Ltd (UDeCOTT), which is overseeing the project, said the incident had nothing to do with the project but did take place on the compound.

According to unconfirmed reports, the issue surrounded a car which was parked under the tent. When the owner of the car refused to move, the driver of the white station wagon reacted.

But the UDeCOTT source said that no permissions for vending on the compound had been granted.

Citizens expressed disbelief at the video, however opinions varied.

Pharaoh Seti: "It was the most stupid immature thing to do. I hope she owns that spot of land and the car is parked in her property if not then she is wrong for vandalizing the man’s car, she coulda go somewhere else and do business if the car is in the way but now she will get charged for reckless driving, disorderly conduct, purposely damaging property and causing an accident and the court will order her to pay, and may also take away her license cause the public don’t need that kinda rage on the road, so she will end up loosing way more than she would have earned... and all of you who agreeing with her ignorant actions just as bad as her and is part of society’s problem."

Patricia Wallace: "Don't matter how vex I get I can't do my car that her man or family does fix cars?"

Riaz Mohammed: "I heard they didn't want the woman selling food there anymore so they are trying to distress her to move. The car was deliberately parked under her tent and when she asked them to move it, they ignored her and left it there. She begged them to move the car from under her tent so she could sell but they didn't want to. People could say what they want but desperation, anger, frustration, oppression and not being able to make a dollar made this woman do that."

Debra Maraj: "So she will have to fix her car. His car. May even get banned from selling there and who knows what else. That making any sense?"

Ezan Mohammed: "So who have rights to the car park, the legitimate employee, or the lady selling food...there is more than one sides to this story, now let's hear from the owner of the black vehicle.... probably he should have given her a Bligh, probably she was told not to put up her tent in that area, perhaps we will hear the other side."

What are your thoughts?