Watch: Landslide at Myanmar jade mine kills at least 123 people 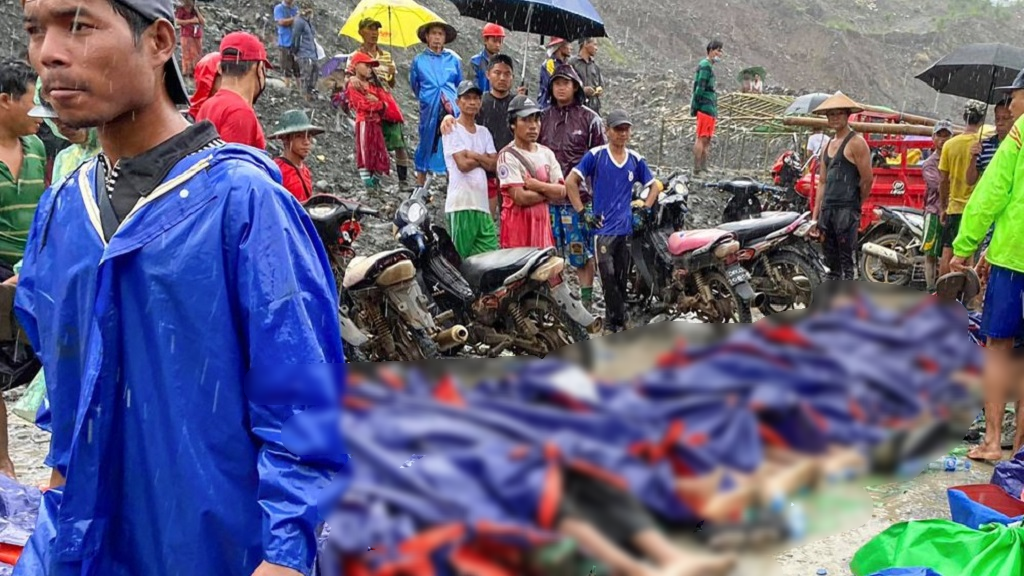 People gather near the bodies of victims of a landslide near a jade mining area in Hpakant, Kachin state, northern Myanmar Thursday, July 2, 2020. Myanmar government says a landslide at a jade mine has killed dozens of people. (AP Photo/Zaw Moe Htet)

At least 123 people were killed Thursday in a landslide at a jade mine in northern Myanmar, the worst in a series of deadly accidents at such sites in recent years.

A statement from the Ministry of Information said 123 bodies had been recovered from the site of the landslide in Hpakant, while the Myanmar Fire Service Department, which coordinates rescues and other emergency services, put the total at 126.

"The jade miners were smothered by a wave of mud," a statement from the fire service said.

A crowd gathered in the rain around corpses shrouded in blue-and-red plastic sheets, laid in a row on the ground.

Emergency workers had to slog through heavy mud to retrieve bodies by wrapping them in the plastic sheets, which served as makeshift body bags that were then hung on crossed wooden poles shouldered by the recovery teams.

Khin Maung Myint, a lawmaker from Hpakant, earlier said that in addition to the dead, another 54 people were injured and sent to hospitals.

The Hpakant area in Kachin state is 950 kilometres (600 miles) north of Myanmar's biggest city, Yangon, and is the centre of the world's biggest and most lucrative jade mining industry.

Thursday's death toll surpasses that of a November 2015 accident that left 113 dead and was previously considered the country's worst.

In that case, the victims died when a 60-meter (200-foot) -high mountain of earth and waste discarded by several mines tumbled in the middle of the night, enveloping more than 70 huts where miners slept.

Those killed in such accidents are usually freelance miners who settle near giant mounds of discarded earth that has been excavated by heavy machinery.

The freelancers who scavenge for bits of jade usually work and live at the base of the mounds of earth, which become particularly unstable during the rainy season.

Most scavengers are unregistered migrants from other areas, making it hard to determine exactly how many people are actually missing after such accidents and in many cases leaving the relatives of the dead in their home villages unaware of their fate.

Local activists have complained that the profitability of jade mining has led businesses and the government to neglect enforcing already very weak regulations in the industry.

According to Global Witness, a London-based group that investigates misuse of revenues from natural resources, Myanmar's jade industry generated about $31 billion in 2014, with most of the wealth going to individuals and companies tied to the country's former military rulers.

Global Witness made its estimate in a detailed report, and more recent reliable figures are not readily available.

"Large companies, many of them owned by families of former generals, army companies, cronies and drug lords, are making tens or hundreds of millions of dollars a year through their plunder of Hpakant," Mike Davis of Global Witness said when the group released its report in 2015.

"Their legacy to local people is a dystopian wasteland in which scores of people at a time are buried alive in landslides," said Davis.

Jade mining also plays a role in the decades-old struggle of ethnic minority groups in Myanmar's borderlands to take more control of their own destiny.

The area where members of the Kachin minority are dominant is poverty stricken despite hosting lucrative deposits of rubies as well as jade.

The Kachin believe they are not getting a fair share of the profits from deals that the central government makes with mining companies that critics charge are cronies of the military — a major player in the country's administration.

Kachin guerrillas have engaged in intermittent but occasionally heavy combat with government troops.

Workers dig by hand to free dozens in Indonesia mine rubble

24 bodies found after Zimbabwe mine disaster; search goes on

Teenagers in love found slain at bottom of old mine shaft