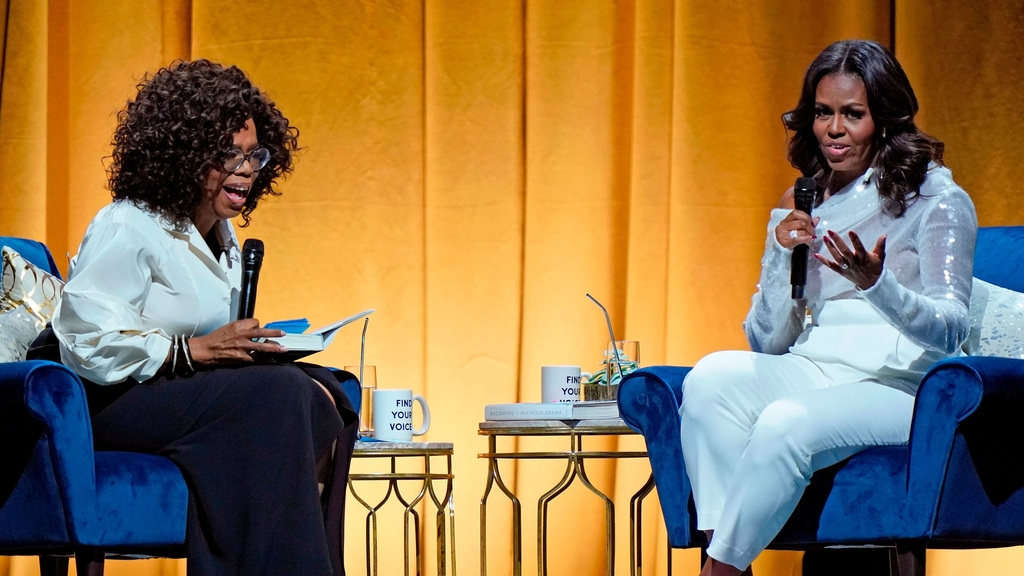 Michelle Obama began her 12-stop book tour Tuesday by sitting with Oprah Winfrey before an audience at the home arena of the Chicago Bulls, speaking on everything from piano lessons and washing socks to crying on a plane the day her family moved out of the White House and President Donald Trump moved in.

The crowd of 14,000 roared as the former first lady stepped onto a stage at the sold-out United Center event, which felt part talk show, part political rally and part rock concert, complete with $35 Michele Obama T-shirts emblazoned with her face and the title of her just-released memoir, "Becoming." Family pictures of Barack Obama and their children flashed on a screen over her shoulder as she spoke.

During the more than 90-minute conversation under Bulls' NBA championship banners in Obama's home city, she never directly criticised Trump. Crying on the plane leaving Washington on Inauguration Day 2017, she explained, had nothing to do with Trump.

"When I got on the plane, I sobbed for 30 minutes," she said. "I think it was just the release of eight years trying to do everything perfectly."

Obama turned to her husband, who had just become a former president. "I said to Barack, 'That was so hard, what we just did. That was so hard." She said she didn't mention that episode in her book.

She didn't criticise Trump directly at the event despite direct criticism of him in her book.

She writes in "Becoming" that Trump's "loud and reckless innuendos" about her husband's birth certificate stirred people up and put "my family's safety at risk." And for this," she adds, "I'd never forgive him."

Trump responded last week, saying Michelle Obama "got paid a lot of money" to write that book and they always expect a little controversy." The current president said that he'd never forgive his predecessor for making the country "very unsafe."

When Winfrey, who selected "Becoming" for her influential book club, introduced Obama she referred to the divisive political climate, also without directly naming Trump.

"So many people are feeling uneasy... afraid of the impending darkness," Winfrey told the audience. "But you all being here tonight is a testament to the light."

"Becoming" describes Obama's upbringing on Chicago's South Side and her transition to college at Princeton University. As she does in her book, she recounted Tuesday being raised in a family that struggled economically — but with parents who encouraged her to be successful.

When she was a child, she said her dad would complain to her mother that she wasn't teaching her children how to wash socks, because he had had so few socks growing up that he had to wash them and dry them on a radiator himself.

"My mom said, 'I'm not teaching them how to wash their socks. I'm going to teach them to go to college, so they can buy a washing machine,'" Obama said Tuesday.

She also talked about learning how to play the piano on a rickety one and her surprise at seeing her first piano that was in good condition.

"You mean there are perfect pianos out there?" she recalled thinking. "I didn't even know about it."

The memoir, officially released Tuesday, is already a best-seller. It topped Amazon.com's best-seller list throughout the weekend.

The tour that started in Chicago moves on to Los Angles, Washington, Detroit, Paris and London, and other U.S. cities. It ends next month in New York City.

Tens of thousands of people purchased tickets to Obama's United Center appearance — paying from just under $30 to hundreds or even thousands of dollars for VIP packages. No tickets are available online for some stops.

Although some fans have complained about the high cost, 10 percent of tickets costs are being donated to local charities, schools, and community groups.