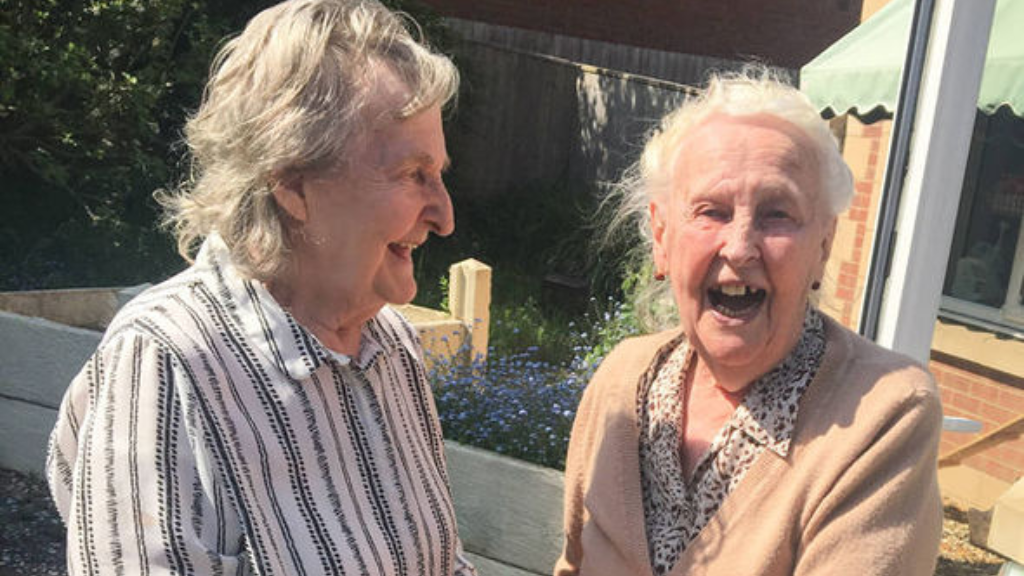 This is the incredibly touching moment two sisters with Alzheimer’s see each other for the first time in 15 years.

Despite now struggling to communicate because of her condition, Ann Patrick was clearly delighted when she recognised her long-lost sister Marguerita Wilson.

After they both set eyes on each other Ann pulled her big sister in for a heart-warming hug and gently rubbed her cheek.

Marguerita, 88, whose condition is not as advanced as Anna’s, burst into tears when she finally got to hug her sister again. The two sisters had always been close but 15 years ago had drifted apart as they found it harder to visit each other.

Their reunion was arranged after Anna’s granddaughter Louise Gover, 39, met Margaret without knowing who she was at an Alzheimer's day club Louise was running.

After finding out Marguerita and Ann, 79, were related she contacted Marguerita’s daughter Karina Benison to arrange a meeting between the two at Ann’s care home in Trowbridge, Wiltshire, on May 6.

Louise, from Trowbridge, said: “It was a very emotional meeting. My nan and Marguerita were delighted to see each other again, and everyone from family to the care home nurses were crying a few tears.

“Margaret was really emotional. She could not stop smiling and burst into tears at one point. Unfortunately, my nan’s Alzheimer’s is more advanced than Margaret’s and she has difficulty communicating with speech, but she clearly recognised her sister and was delighted to see her.  She was repeatedly stroking Marguerita’s face. They sat together for a good hour and a half while everyone chatted. It was really lovely.”

Louise got to know Marguerita completely by accident when she turned up to the Alzheimer’s day club where Louise works as a manager.

She was struck by how much like her nan Marguerita looked and, when she spoke, she noticed she had a similar accent. After finding out her background, she realised Marguerita was Ann’s sister and they had not seen each other for 15 years.

She decided she would set up a meeting at Ann’s care home.

Louise said: “I was working in Trowbridge at the Alzheimer’s day club in May and this lady walked in. I thought, ‘Gosh, she looks like my nan,’ and then when I was speaking to her I realised she had a similar accent. She told me she was originally from Belgium, which is where my nan is from, and as we were chatting away from there we realised that she was in fact Ann’s sister.

“As soon as I found that out I knew they had to meet up, so I arranged it with Marguerita’s daughter Karina and she came to the care home one Sunday afternoon. They have since met up again and love seeing each other. It’s a truly wonderful story.”

Ann and Marguerita are two of five children born in Antwerp, Belgium, to an English mother and a Belgian father.

According to Marguerita, when she was 16 and Ann eight their mother Mildred left her unhappy marriage and took her children back to England, where they have lived ever since.

Louise said: “My nan has had a colourful life. She was married four times and she worked as a head cook at a boarding school and in a tennis ball factory.

“She’s such a fun and lovely person. She was diagnosed with Alzheimer’s three years ago when my grandad was in hospital. We moved her into a care home after she started forgetting who he was and she is much safer now. But she still remembered Marguerita from all those years ago, which was so touching.”

Marguerita's daughter Karina, 60, from Trowbridge said: "My mum adores Belgium and can still remember everything about it, even if she has problems remembering more recent things.

"When she first came to England she was one of four sisters and helped looked after them at home. Then she started working in pubs before she met my dad Michael and had five children, me and my four brothers. She is a very calm and gentle lady and she used to call me miss bossy boots because I was the one who kept my brothers in line.

"My dad passed away in 1987 and she has been on her own ever since. She lost touch with Ann about 15 years ago. I think it was just one of those things. They were a close family but they never needed to see each other every week. It was so wonderful they got to see each other again. I think everyone there was crying."

Louise posted a video of the sisters’ meeting on Facebook to show people can still lead positive lives while living with dementia.

“Unfortunately a lot of the things people read and see about dementia are negative," she said. “Of course, it is a horrible condition but people with dementia can still lead productive lives and enjoy themselves. I wanted to show people just how positive interaction with family and stimulation can be.”

Watch: Toddler lying down on escalator gets hand stuck