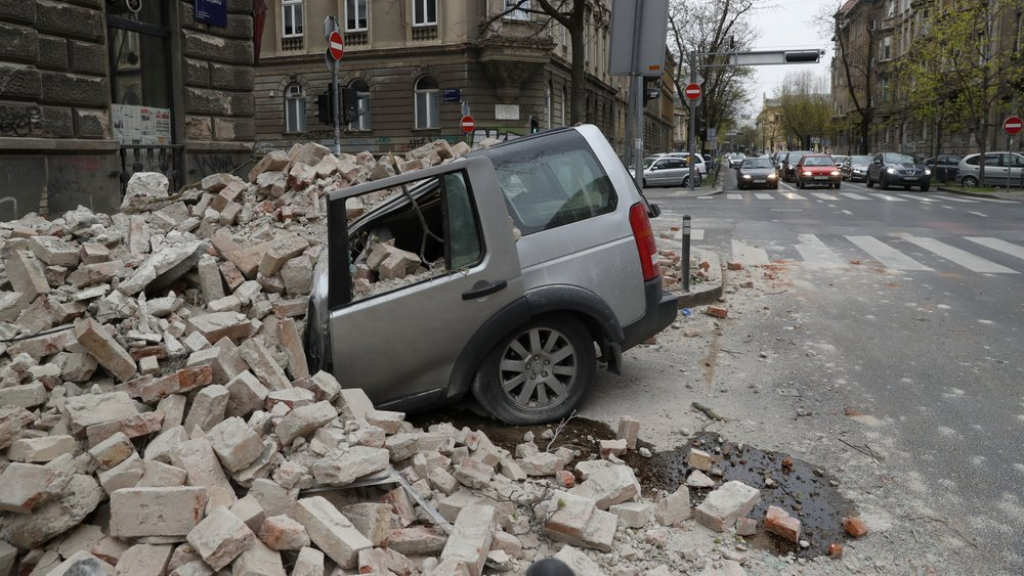 A car is crushed by falling debris after an earthquake in Zagreb, Croatia, Sunday, March 22, 2020. A strong earthquake shook Croatia and its capital on Sunday, causing widespread damage and panic. (AP Photo/Darko Bandic)

A strong earthquake shook Croatia and its capital on Sunday, causing panic, the evacuation of hospitals and widespread damage — including to the city's iconic cathedral — all amid a partial coronavirus lockdown.

A 15-year-old was reported in critical condition and several others were injured, news outlets reported.

The European seismological agency, EMSC, said the earthquake measured 5.3 and struck a wide area north of the capital, Zagreb, at 6:23 am (0523 GMT) Sunday. The epicentre was 7 kilometres (4 miles) north of Zagreb at a depth of 10 kilometres (6 miles).

Prime Minister Andrej Plenkovic said the earthquake was the biggest in Zagreb in the last 140 years.

Many buildings in the capital cracked and walls and rooftops were damaged. Downtown streets were littered with debris. Concrete slabs fell on cars and chimneys landed in front of entrances.

Footage from the scene showed mothers dressed in nightgowns hugging their newborn babies in a parking lot as they evacuated a damaged maternity hospital amid freezing temperatures. The women, newborn babies and incubators were being moved to a new location with the help of the army.

Zagreb's iconic cathedral was also damaged, with the top of one of its two spires collapsing. The cathedral was rebuilt after it toppled in the 1880 earthquake.

Power was cut as people ran out of their homes. Several fires were also reported. At least two other tremors were recorded later. Residents shared photos of belongings falling off shelves, broken bottles and glass inside homes.

Officials first said a 15-year-old was killed, but doctors later said that she is in critical condition and that they are fighting for her life. They gave no immediate details on the extent of other injuries.

The earthquake struck amid a partial lockdown of the capital because of the spread of the coronavirus. People were told to avoid public areas, such as parks and public squares, but had little choice as they fled their residences.

Up to five people are allowed to be together while keeping distance.

The prime minister urged the citizens to remain calm and stay outside their homes in the central parts of Zagreb, which sustained the most damage.

"We have two parallel crisis that contradict each other," Plenkovic said after an emergency meeting of Croatia's top officials.

Croatia's army and all emergency services will start clearing the streets as soon as possible, while assessment will start of the damage at the same time.

"We will try to clear the streets as soon as possible," he said. "Stay outside your homes and keep your distance."

Interior Minister Davor Bozinovic said the situation was complicated by the restrictive virus-related measures in place.

Earthquake rattles millions in the US amid coronavirus threat