Watch: Winston Duke's mom chats it up with Mark Wahlberg 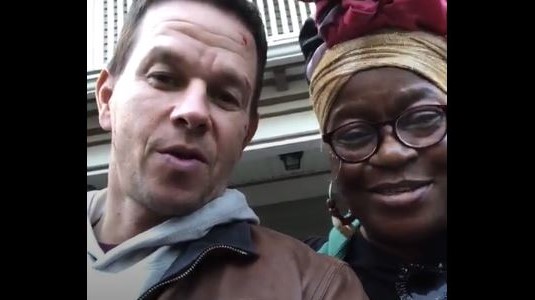 In a recent Instagram post, she took a video of herself chatting with Hollywood megastar Mark Wahlberg. The video was seemingly intended for her daughter, Dr Cindy Duke, who appears to be a fan of the actor.

"Is she in Trini right now?" Mark asked. When she told him that her daughter is a doctor based in Las Vegas, Mark indicated that he might need a check-up. Without skipping a beat, Cora replied, "No, she doesn't check guys...she does ladies."

Dr Duke is a fertility specialist who Cora immediately recommended to Mark to go to if he wanted to add more kids to his brood. "I've got four, I'm done," he countered. At one point, he inquired about going to Trinidad Carnival, declaring: "We're going to wine!"

Check out more of the hilarious exchange.

If you're wondering how these two paths crossed, it's because Winston and Mark are set to co-star in the Netflix crime drama “Wonderland.”

The film is being adapted from the novel “Robert B. Parker’s Wonderland,” written by Ace Atkins and is part of the Spenser series--named after a fictional character in the series of detective novels initially written by American mystery writer Parker and later by Atkins.

The story follows Detective Spenser (Wahlberg) who, fresh out of prison, is sucked back into Boston’s underbelly as he uncovers the truth about a murder and the twisted conspiracy behind it.

Duke will play Hawk, Spenser’s close friend and an equally tough, but somewhat shady image of Spenser himself.