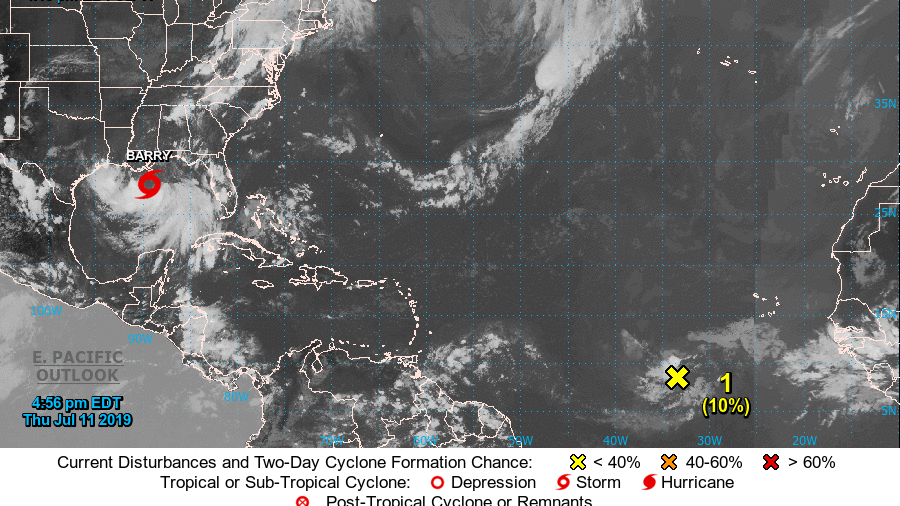 A weather system which formed south-east of the Caribbean off the coast of West Africa had a 10 percent chance of developing according to an update Thursday from the US National Hurricane Centre.

Some slight development of the wave is possible during the next day or two while it moves westward at 15 to 20 mph before environmental conditions become less favourable over the weekend.

Meanwhile, a hurricane warning was in effect for Louisiana ahead of the passage of Tropical Storm Barry.

Storm surge watches were in effect or parts of the Mississippi/Alabama border.

An update shared by the NHC on Thursday is as follows:

On the forecast track, the center of Barry will be near or over the central or southeastern coast of Louisiana Friday night or Saturday, and then move inland into the lower Mississippi Valley on Sunday.

Maximum sustained winds are near 40 mph (65 km/h) with higher gusts. Strengthening is expected during the next day or two, and Barry could become a hurricane late Friday or early Saturday when the center is near the Louisiana coast. Weakening is expected after Barry moves inland.

Tropical-storm-force winds extend outward up to 140 miles (220 km) from the center.  An oil rig east of the Mouth of the Mississippi River recently reported sustained winds of 40 mph and a wind gust of 52 mph at an elevation of 525 feet.

Those in affected areas are urged to continue to monitor updates from official weather sources for the latest updates.

Watch: 6 dead in storms and floods in southeastern China