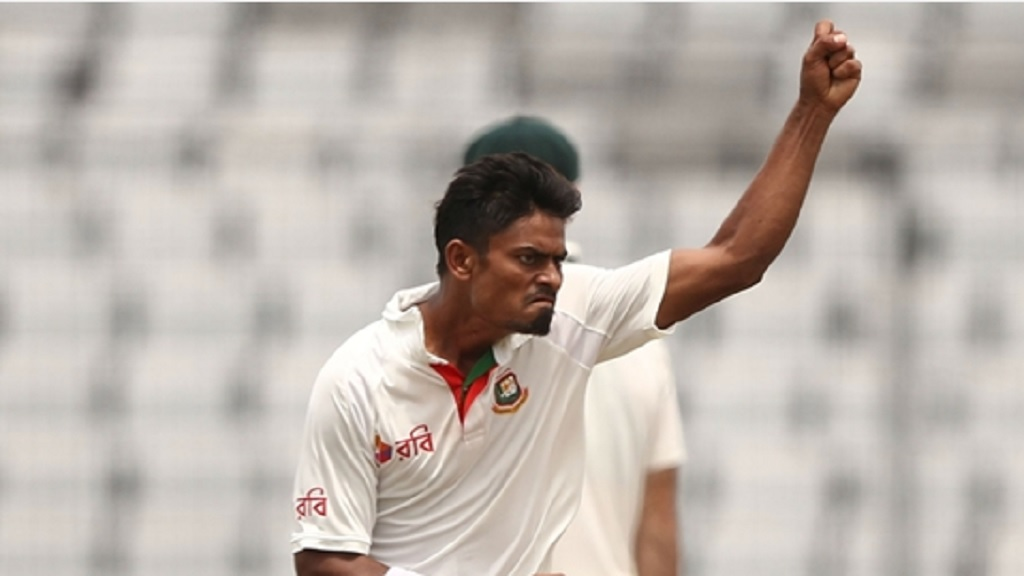 Taijul Islam tore through West Indies and Shakib Al Hasan made history as Bangladesh sealed a 64-run victory on day three of the first Test in Chittagong on Saturday.

The Windies were set 204 for victory after bowling the Tigers out for just 125 on a pitch offering sharp turn, but they were 11-4 at lunch and folded to 139 all out.

Taijul did much of the damage, taking 6-33, and Shakib became the fastest to 3000 Test runs and 200 wickets in his 54th match in the longest format - beating Ian Botham's record - as Bangladesh claimed a first home win over West Indies.

Sunil Ambris (43) and Jomel Warrican (41) spared Kraigg Brathwaite's side total humiliation, but they will have to go back to the drawing board after going 1-0 down in the two-match series.

Bangladesh resumed with a lead of 133 but in trouble on 55-5 and Shannon Gabriel - banned for the second Test after a clash with Imrul Kayes on day one - got an early breakthrough by cleaning up Mushfiqur Rahim.

Mehidy Hasan and Mahmudullah (31) guided the Tigers over the 100 mark, but Devendra Bishoo (4-26) took three quick wickets before Roston Chase (3-18) dismissed Taijul to end the innings.

The Windies had 5.5 overs to see out before lunch, but they were teetering at the break after Shakib (2-30) and Taijul took two wickets apiece in a dramatic passage of play.

Kieran Powell gifted Shakib his 200th scalp when he was stumped attempting a slog down the track and the all-rounder struck again by snaring Shai Hope caught behind.

Taijul removed captain Brathwaite with his first ball and also dismissed Chase lbw in the same over to put West Indies deeper in the mire at lunch.

Shimron Hetmyer again went on the attack, just as he did in the first innings, and made a brisk 27 before holing out to Mehidy (2-27), then Taijul saw the back of Shane Dowrich and Bishoo as the Tigers closed in on victory.

The Windies were 75-8 after Bangladesh successfully reviewed when Taijul rapped Kemar Roach in front but the pacemen was given not out.

Warrican finally provided some support for Ambris in a ninth-wicket stand of 63, but Shakib took a sharp catch at midwicket to get rid of the spinner and Taijul's sixth wicket ended a fast-moving Test.

Windies hit back after teenage debutant Nayeem makes his mark