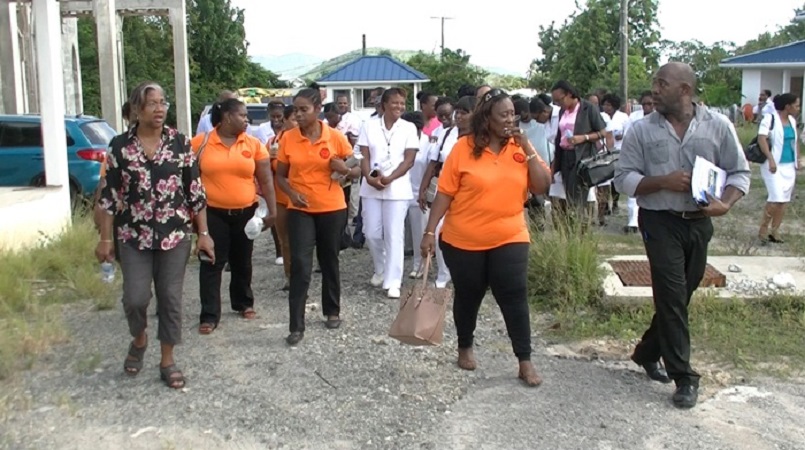 St. Lucians will know within a month’s time government’s decision whether to build a new hospital near the incomplete St. Jude Hospital or continue with St. Jude unto completion.

Government at present is undecided, a state of affair government has tried to downplay for some time now.

The time frame given for a decision from government was announced by Economic Affairs Minister Guy Joseph, who is responsible for the hospital’s reconstruction. He made that announcement recently in an attempt, it appears, to allay negative public sentiments over reports emanating from Health Minister Mary Isaac, on a talk show, that government, which has stopped work on St. Jude, will build a brand new hospital instead.

Government stopped work on St. Jude in June 2016 to determine what stage the project was at, both financially and materially. They conducted a technical audit which determined that $118 million was spent on the incomplete structure, $20 million more when compared to the $98 million Shanta King, the project’s manager from February 2010 – 2016 said was spent on the project.

Government, this year, has commissioned a forensic audit on the project to determine where the money went.

The hospital reconstruction, which started with a sod turning ceremony one year after it was destroyed by fire (September 2009), has been a source of contention between the government and the opposition St. Lucia Labour Party from 2010 up to the present, however that contention has grown in intensity after the United Workers Party led by Allen Chastanet took over the reins of government in June 2016.

The dispute between the two sides is now at fever pitch level with each blaming the other for the present state of affairs.

Public sentiments are split along political lines on the subject. The Labour Party is calling on the government to complete the hospital or else…

Government on the other hand has said it will complete the hospital. Prime Minister Chastanet just this week and in the past complained bitterly about the inadequacies of the present structure saying that it has major flaws and cannot pass accreditation as a hospital if completed along present lines.

His concerns about the present structure are many, such as poor air circulation, small hallways, and the makeup of the operating tables.

“If we are going to make it (build hospital) at an international level, the estimates are showing that we are going to spend in excess of $120 million and going to take over a year and a half to do that,” Chastanet said.

He is torn between whether to build a new hospital or complete St. Jude both of which will take almost the same amount of money, according to the prime minister who quoted $120 million as the price tag.

However all indications are that he is leaning towards the building of a new hospital. It first started with Senator Isaac, who speaking in her capacity as Minister for Health told a television talk show host last month about government’s intention to build a new hospital within a stone’s throw from St. Jude and transform the present St. Jude into a medical facility for use by a medical university.

Another indication of government’s leaning towards a new hospital came from Prime Minister Chastanet this week when he told reporters that he saw a world class hospital in Cayman Islands that was built in one year.

Minister Joseph gave indications of government’s leaning towards a new hospital when he said that the prime minister will speak within a month’s time on the existing facility that is St. Jude and on any new considerations pertaining to the health sector.

Government has had nothing positive to say about the St. Jude reconstruction project which spent about 15 months under its watch (August 2010 – December 2011) when it lost the general elections and almost five years under the Labour Party which lost the elections just about two years ago.