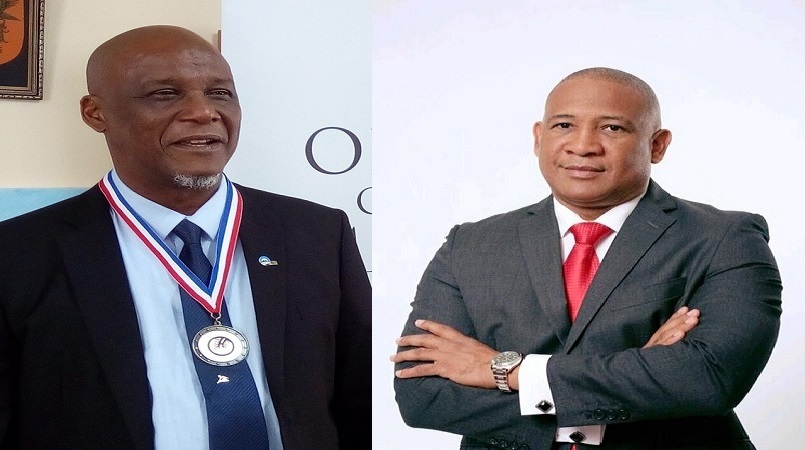 Castries Mayor Peterson Francis is playing his political cards very close to his chest by not revealing his political ambitions for the upcoming general elections constitutionally due in 2021, despite unconfirmed reports that he has shown a keen interest in the Castries South seat.

Francis, at a press conference on Monday, August 19, 2019, dodged questions about him contesting the Castries South seat by neither confirming nor denying his interest in the seat. He, however, kept the rumour mill churning by stating that “people in Castries South have been coming to me and asking me whether I am interested in running.”

Fuelling speculation about a Francis challenge to the incumbent Dr Ernest Hilaire in 2021, under the United Workers Party banner, is the proliferation of stickers on vehicles, business places and on buildings with the words “I am following the mayor.”

When asked about the stickers and the inference that its words are a political message to the masses, Francis admits that he is a politician and therefore as a politician if the opportunity presents itself, he will consider elective politics.

There is widespread speculation that Health Minister Mary Isaac, who contested the Castries South seat for the United Workers Party in 2016, will be replaced by Francis.

There has been no official or unofficial acknowledgement of that from the party up to this day, but Francis, more and more, is showing signs that he may be the one to face Hilaire in 2021.

At today’s press conference he challenged Hilaire's assertion made last week at a town hall meeting of the Saint Lucia Labour Party, saying the Castries Constituency Council (CCC) was in financial troubles.

Francis vehemently denied this, calling on Hilaire to come to the CCC where the questions he has will be answered and he can see for himself whether his summations about Francis and the CCC are correct.

It seems that Hilaire may have implied at the town hall meeting that the sale of Saint Lucia Electricity Services (LUCELEC) shares held by the CCC were an indication that the institution was in financial difficulties.

Francis dismissed the assertion, claiming that the selling of the shares was a policy decision made by the Government of Saint Lucia.

Referring to Hilaire Francis said, “I do not know where he got his documents, we only sold 0.83 percent and we did not sell 0.83 percent because we were in a financial bind. We sold it because of a government policy decision.”

Mayor Francis said Hilaire is being invited, every month, to the statutory meetings of the CCC. He is also being sent the minutes. Further, he does not acknowledge receipt of the invitations to the meetings.

“He never comes to the meeting but he wants to know about the wage bill, which is something I have spoken about over and over,” Francis said.

Francis believes that Hilaire’s attacks on him are political and an attempt to destroy him should he decide to challenge Hilaire for the seat.

“Mr Hilaire has made a lot of accusations against the mayor and it looks like the mayor is his target. I do not know whether he is afraid. I have not made any announcements, I do not think the UWP has made an announcement as to their candidate for Castries South,” Francis said.

Mayor Francis is certain about one thing, to see Hilaire voted out of the parliament by the people of Castries South.

”I want to assure Mr Hilaire that I do not have to be a candidate for me to make sure that Hilaire will not be in the House at the next election because I do not believe he has performed,” Francis said.