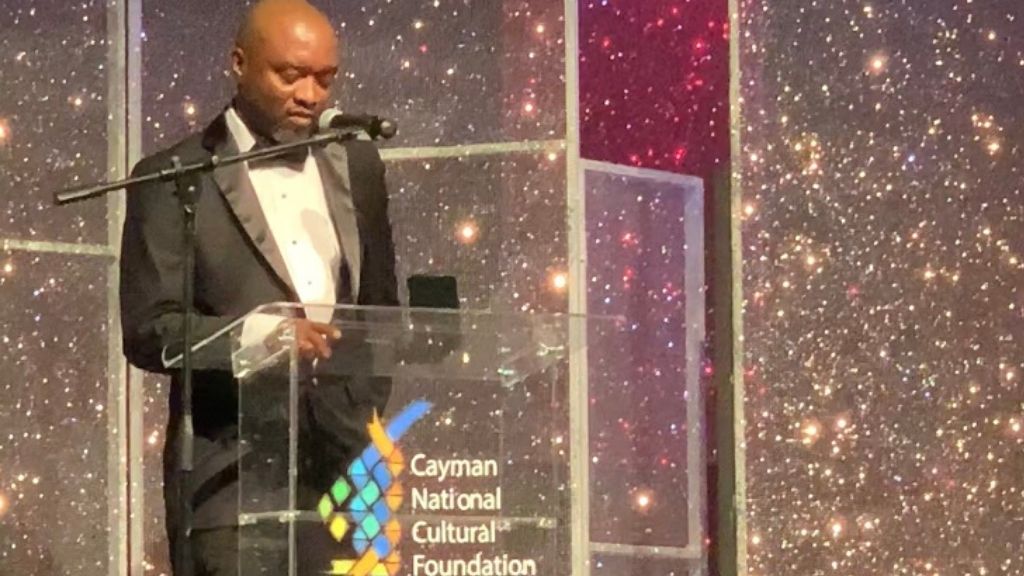 Five years after migrating to the Cayman Islands from Barbados, George learned that he had colon cancer. And years later, almost immediately upon getting a clean bill of health... before he barely had enough time to breathe a sigh of relief... George suffered from kidney failure that would have very soon taken his life, had it not been for a last-minute kidney transplant.

But neither of these life-altering health crises kept George down. The former keyboardist of one of the Caribbean's most famous bands, Square One, continued to give back to his community. He also absorbed the lessons and wisdom that experiences such as these could only impart if one ultimately survives.

And survive he did.

George continued to be devoted to his music and play a major role in Cayman's arts scene, and tonight February 20, he received well-deserved recognition for "valuable contributions made to the exploration, promotions and/or preservation of Cayman cultural heritage and/or the arts," before an audience that included his daughter and friends, including Square One bandmates, Andy "Blood" Armstrong and Terry Arthur, who flew to Cayman to share in George's big moment.

Upon receiving his award, George shared some of the wisdom that he had acquired over the years.

It went as follows:

On the door of my refrigerator, on the wall of my office and in a slot of my wallet, for as long as I know myself, I’ve always been in the company of these words.

"I shall pass this way but once, any good that I can do or any kindness that I can show to any human being let me do it now, let me not defer nor neglect it for I shall not pass this way again.”

So it begs the question-- what will you do with your short time here on earth as we just pass through?

So what is life? It is even a vapour that appeareth for a little time and then vanishes away.

Within the 24 hour time period which constitutes a day, we all have 86,400 seconds to spend and invest. Each day the bank named time opens a new account for you and for me. It allows no balances or no overdrafts; if you fail to use the day's deposits, the loss is yours. It is against this background that I have endeavoured to make every second, every minute and every hour of my life count.

I’m yet to absorb the magnitude of this moment but It is with a sense of gratitude and deep humility that I accept this silver award for creativity, bestowed upon me for my many unbroken years and dedicated service to entertainment, the arts and culture.

It’s particularly special for me because tonight I’m able to share it with 2 of my long time friends who travelled all the way from Barbados to share this moment with me. It’s special in the sense that as 11-year-old boys we sat at one piano in school and made music with the dreams of one day becoming a local success. Not only did we go on to become a local success, but we also ventured on to become a global success and most importantly, we remained friends for life.

I do what I do, not for awards or recognition but from a genuine place in my heart, which forms the core of my very existence. I cannot imagine a world without music or culture.

Tonight I encourage you to become a volunteer and give of your time to continue the preservation of arts, heritage and culture in the Cayman Islands

To the CNCF, thank you again. I shall forever cherish this award.

A Cultural Supernova: Carifesta XIV hailed as a success