Alisson declares himself '100 per cent fit' 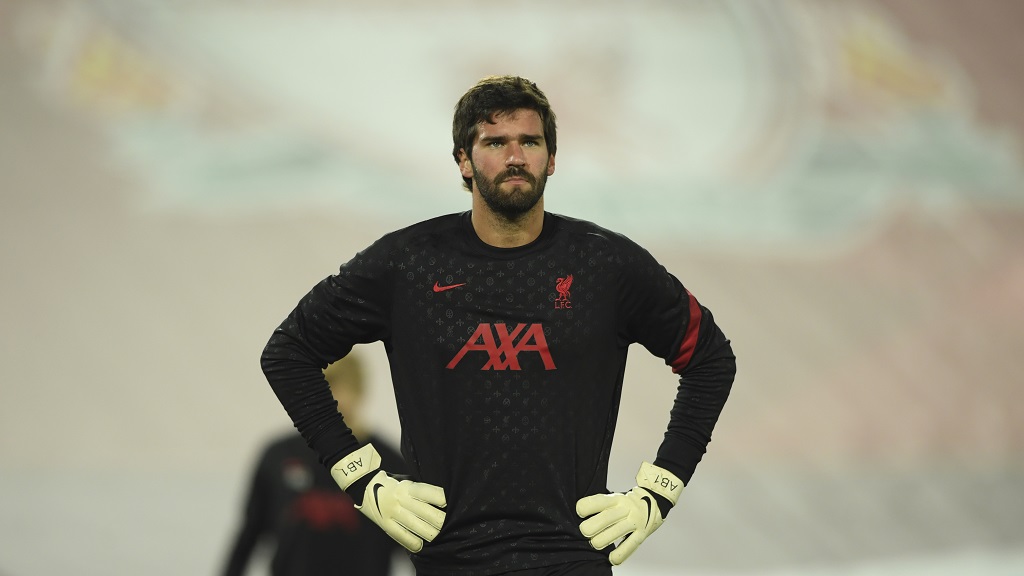 Liverpool's goalkeeper Alisson takes part in the warm up ahead of the English Premier League football match against Sheffield United at Anfield in Liverpool, England, Saturday, Oct. 24, 2020. (Stu Forster/Pool via AP).

Alisson has declared himself "100-per-cent fit" after defying his initial prognosis of six weeks on the sidelines and making his Liverpool return last weekend.

The Brazil international damaged his shoulder in training ahead of the October 4 trip to Aston Villa, which the Premier League champions lost 7-2 in his absence.

He also sat out the 2-2 draw with Everton and 1-0 win away at Ajax in the Champions League but was back between the sticks for Saturday's 2-1 win over Sheffield United.

Alisson is expected to start Tuesday's Champions League match with Danish champions Midtjylland at Anfield and has thanked Liverpool's backroom staff for helping him with his swift recovery, having returned a few weeks ahead of schedule.

"It's good to be back, first of all. I'm really happy," he said at a pre-match news conference on Monday.

"I tried to give my best and I have the top physios on my side, helping me as well to accelerate the recovery process.

"As soon as the doctor said it was four to six weeks, I told him: 'No, Doc, we go to two or three weeks maximum.' He agreed with me and then we just go for it.

"I'm really happy to be back. I just want to thank the physios, the fitness staff, the doctors, and the goalie coaches who helped me on this process.

"Every injury that you have on the ligament – shoulder, ankle or knee – you still feel something weird. Not pain, not really pain, but it's just weird a little bit.

"You feel it for a while, for a couple of weeks. But nothing that puts limits on my way to play – I'm really 100 per cent fit to play and I'm comfortable with that."

Alisson's absence was felt during his three-match spell on the sidelines, particularly in the loss to Villa, the first time Liverpool had conceded seven goals in a game since 1963.

The Merseyside club has won 57 and lost just four of their 71 top-flight matches since Alisson joined from Roma in July 2018, the 28-year-old's win rate of 80 per cent the best of any Premier League goalkeeper to have played at least 15 games in that period.

"It's bad not being involved in football games. It's the worst thing for a football player," he added. "But, unfortunately, we have to deal with those kinds of things as well.

"It's part of the job. Injuries, we try to avoid them, we try to do prevention work, but sometimes they happen. I'm glad it was only three weeks, but it was a long three weeks, it looked like three months.

"Not being involved in games – in every game – is always hard, not only the Atletico [Madrid] game [last season] or the Aston Villa game – it's always hard because you want to help.

"You want to be involved, do what you love to do and help your team-mates go for our goals."

Jurgen Klopp's side has had a mixed start to the campaign on the results front, not helped by the performances of stand-in keeper Adrian.

He has made more errors directly leading to a goal (three) in his 13 appearances than any other Liverpool player since the start of 2019-20, but Alisson is pleased his side have at least found a way to grind out back-to-back wins.

"Sometimes this is needed," he said. "You will not play the 60 matches in a year in the same way, all the games well.

"Sometimes you need a little bit of luck and luck comes together with hard work, I believe that. We are doing our hard work, so sometimes we win the games without playing the best football.

"But we need to have the full desire, the full passion always in the game. Sometimes you can make it happen.