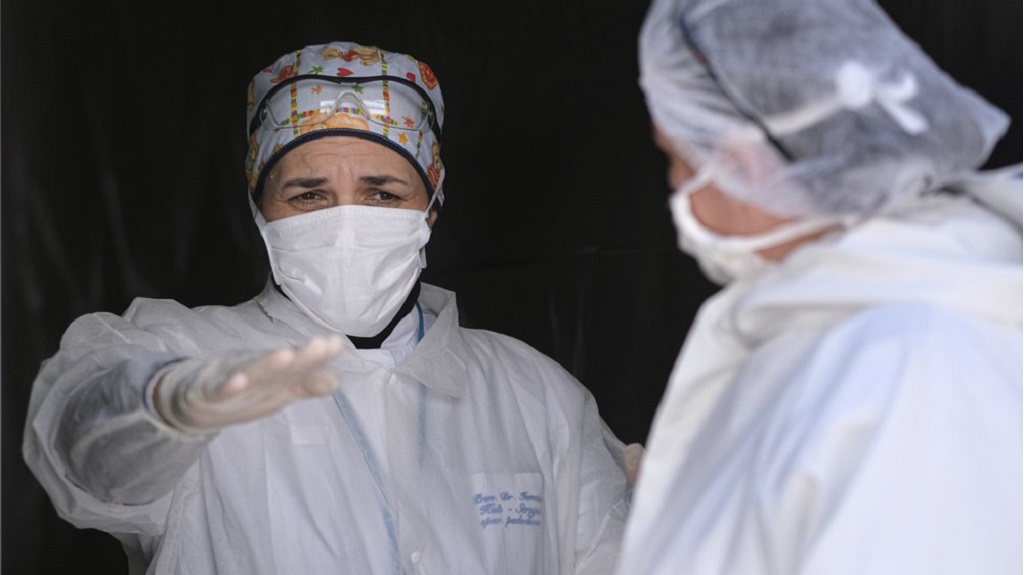 Medical staff gesture in the triage unit of the Vrazova community health center in Sarajevo, Bosnia, Tuesday, April 7, 2020. Less than three weeks ago, the respected Bosnian epidemiologist Sefik Pasagic was fielding calls from journalists seeking his opinion and advice on how best to prepare for the coronavirus outbreak. (AP Photo/Kemal Softic)

The minister for veteran affairs in the government of one of Bosnia's two highly independent regions has died at the age of 53, a week after testing positive for COVID-19.

Salko Bukvarevic died Wednesday in a COVID-19 hospital in Sarajevo, where he was admitted last week with pneumonia and breathing problems.

He had served in the government of Bosniak-Croat federation since 2015. The region's prime minister, Fadil Novalic, was also hospitalized with COVID-19, but was released Tuesday following two weeks of treatment.

Nearly 80 percent of all cases were registered since mid-May, when a strict, nearly 2-month-long, coronavirus lockdown was lifted.

— More than a year after a young US-backed politician rose up to oust Venezuelan President Nicolás Maduro, the socialist leader holds a yet stronger grip on power. And he's getting a boost from the novel coronavirus.

— Hundreds of people with breathing problems are waiting for hours in long lines in Ecuador's capital seeking medical attention and tests to determine if they are infected with the new coronavirus.

— A new report says Brazil's extreme poverty has plunged due to a monthly federal handout during the pandemic, but threatens to bounce back once the government ceases the stopgap welfare program.

LONDON -- A committee of British lawmakers says the government's decision to advise English hospitals to discharge thousands of patients into care homes without knowing if they had the coronavirus was a "reckless" and "appalling" policy error.

The Public Accounts Committee said discharging around 25,000 patients to free up beds was an example of the government's "slow, inconsistent and at times negligent" approach to social care.

In a report, it voiced concerns that the Department of Health and Social Care continued with the policy "even once it was clear there was an emerging problem."

Hospitals in England were asked on March 17 to discharge patients, but did insist on coronavirus test prior to discharge until April 15. The government only said at the end of April that all care home residents and staff, regardless of symptoms, would be able to access tests.

The UK has the highest official coronavirus death toll in Europe, with around 46,000. The actual figure is thought to be far higher as it does not include those who died after contracting the virus but were not tested, including many in care homes.

LONDON -- The British government has signed a deal with GlaxoSmithKline and Sanofi Pasteur for 60 million doses of a potential coronavirus vaccine that could start to be rolled out in the first half of next year.

Britain's GSK and France's Sanofi have the largest vaccine manufacturing capability in the world. The vaccine prospect is based on the existing DNA-based technology used to produce Sanofi's seasonal flu vaccine.

The government said that if the vaccine proves successful, then priority groups, such as health and social care workers, could be given the first doses as early as the first half of next year.

Human clinical studies of the vaccine will begin in September followed by a phase 3 study in December.

This is the fourth deal the British government has signed for potential coronavirus vaccines, worth a combined 250 million doses.

PRAGUE — The Czech capital has registered the highest day-to-day jump in COVID-19 cases since the beginning of the pandemic.

The health authority says 101 people tested positive for the virus on Tuesday.

It says Prague has had over 24 infected per 100,000 people in last seven days. Overall, the entire Czech Republic recorded 275 new cases on Tuesday.

In reaction to the recent surge in Prague, authorities re-imposed mandatory masks at out-patient clinics and pharmacies.

Face coverings are also required in the city's subway network while authorities said Wednesday masks might become mandatory again in the entire public transport possibly at the end of summer.

TOKYO — The commander of US forces in Japan says strict measures are in place to curb the spread of the coronavirus by American military personnel entering Japan.

Okinawa Governor Denny Tamaki has voiced worries about an outbreak spreading from the heavy US military presence on the southern island.

According to Lieutenant General Kevin Schneider, the commander of US troops in Japan, positive cases among the service members and other base employees have gone down over the last five days from 189 to 139. Most of the cases were in Camp Hansen and Futenma, both on Okinawa.

Schneider said the US military is not changing its operations or planned movement of personnel because of the pandemic, but measures are being taken to protect their health and prevent the spread of the virus.

He told reporters that each individual arriving from the US to Japan is quarantined for 14 days, then tested for the virus, and allowed to leave and start work only if they're virus-free.

VALLETTA, Malta — Maltese authorities say 65 migrants rescued at sea Sunday have tested positive for the coronavirus, and that it is waiting for results on another nine.

The migrants were among 94 who were adrift in the Mediterranean Sea for more than 30 hours before Maltese authorities rescued them under intense pressure from aid groups.

The results of the first 85 swab tests showed the vast majority positive for the coronavirus.

The government said those who are positive will be isolated at a reception center, with the others will be quarantined for 14 days.

Malta previously had reported 708 cases of coronavirus and nine deaths, most among permanent Malta residents. Fifty migrants tested positive in March and April.

In a statement released on Wednesday, Stella Kyriakides said of her native Cyprus that there's also concern over a localized spike in COVID-19 infections whose source authorities haven't so far been able to trace.

She says this shows that a section of the population isn't following health and safety protocols and that a renewed surge of infections can be avoided if people remain vigilant at all times.

She said all countries belonging to the 27-member bloc have submitted requests for the drug and that the procurement process will proceed immediately.

Medical officials have said that treatment with remdesivir has been shown to reduce illness severity and mortality in some patients with COVID-19.

JOHANNESBURG — A major South African labor union is threatening to strike after it reported widespread shortages of personal protective equipment for health workers and said some were even using garbage bags to protect themselves.

South Africa's health ministry in response says it will improve reporting on shortages and continue efforts to recruit more health workers. More than 5,000 have been infected across the country.

"No health worker should be exposed to a work environment where they have not been provided with sufficient PPE," the ministry says in response to the report by the National Education, Health and Allied Workers Union.

South Africa makes up over half of the reported cases on the African continent.

TOKYO — As Japan battles a surge in coronavirus cases, some areas may be running out of isolation facilities to monitor infected people.

The health ministry reported 981 new cases Tuesday and three more deaths from COVID-19, raising the cumulative toll to 1,000 people. Most of the new cases were domestic, while 13 were found at airports from incoming flights, it said.

Chief government spokesman Yoshihide Suga acknowledged some areas may be running out of room at places like hotels, where infected people can be housed and monitored away from other people and prevent the spread of the virus.

BEIJING — China reported more than 100 new cases of COVID-19 on Wednesday as the country continues to battle an outbreak in Xinjiang.

The 101 new cases was China's highest daily increase in weeks. The northwestern region of Xinjiang accounted for 89, with another eight in the northeastern province of Liaoning and one in Beijing. Another three cases were brought from outside the country by returning Chinese citizens.

Outside of Xinjiang, the virus has been largely contained in mainland China with the death toll from COVID-19 remaining at 4,634 among 84,060 cases registered since the pandemic first emerged from the central city of Wuhan late last year.

Hospitals are treating 482 people for the disease, with another 274 in isolation while being monitored for showing signs of infection or for having tested positive for the virus without displaying symptoms.

Xinjiang's outbreak has centered on the region's capital and largest city of Urumqi, where authorities have isolated some communities, restricted public transport and ordered widespread testing.

MELBOURNE, Australia — Australia's hard-hit Victoria state recorded its lowest daily tally of COVID-19 cases in nine days while the state premier expressed hope it was the start of a downward trend.

Victoria reported 295 new cases and nine deaths, seven of which were in aged care homes that are bearing the brunt of the pandemic. The outbreak has been concentrated in Melbourne, Australia's second-largest city, which is halfway through a six-week lockdown.

Victoria Premier Daniel Andrews said "trends are not made in one day" but that he hoped the decline continued.

Another Australian state, Queensland, ratcheted up its pandemic travel restrictions. Queensland Premier Annastacia Palaszczuk announced that as of Saturday, anyone returning to the state from Sydney will have to go into hotel quarantine for two weeks.

The expansion followed two positive cases in Brisbane in women now under police investigation because they avoided mandatory quarantine by failing to declare a Melbourne visit.

Queensland has not had a case of community transmission of coronavirus since May. New South Wales state, which includes Sydney, recorded 19 new COVID-19 cases.

Coronavirus vaccine put to final test in thousands of volunteers

Watch: WHO says coronavirus cases have doubled over past 6 weeks