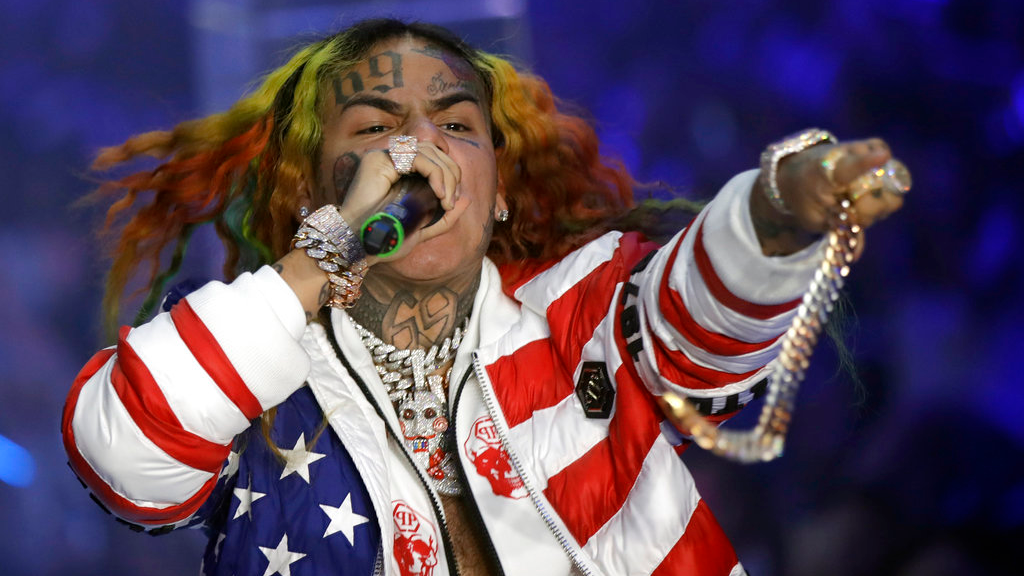 Rapper Tekashi 6ix9ine was deemed a likely danger to the community and denied bail Monday after a prosecutor said there was evidence that he directed or participated in multiple acts of violence as part of a deadly gang.

U.S. Magistrate Judge Henry B. Pitman concluded an hourlong hearing by citing "troubling" corroborating evidence offered by a prosecutor to show that 6ix9ine directed or participated in multiple acts of violence over the last eight months.

Assistant U.S. Attorney Michael Longyear said a backpack stolen during a gunpoint robbery in April was found during a raid at 6ix9ine's Brooklyn residence, along with an automatic pistol.

"The defendant is quite violent," the prosecutor said of a man whose debut album, Day 69, was among the most downloaded records on iTunes.

Longyear said 6ix9ine was captured on surveillance video as he sat in a car and filmed the scene in Times Square when his co-defendants carried out a violent robbery against a rival gang member.

The prosecutor said he was also part of a video boasting about shots recently fired by a co-defendant in Brooklyn's Barclays Center.

Longyear also said the rapper was a threat to flee because of his worldwide connections, hundreds of thousands of dollars in cash and the knowledge that a conviction would bring a mandatory minimum sentence of 32 years in prison and as much as life.

Pitman ordered 6ix9ine held until a Tuesday bail hearing, saying he was concerned about the danger to the community, particularly because the rapper could direct others to carry out acts of violence.

6ix9ine was among five people charged in an indictment containing racketeering and firearms charges. The indictment alleged that he participated in the July shooting of a bystander in Brooklyn and the gunpoint robbery of one of his gang's rivals last spring.

His lawyer, Lance Lazzaro, said 6ix9nine — whose legal name is Daniel Hernandez — posed no threat and denies directing or playing any other role in violence.

Lazzaro said his client had fired some of his co-defendants as part of his management and security team last week and was offered protection by federal agents on Saturday after some of them were overheard on wiretaps threatening his life.

After the rapper refused protection, he was arrested on Sunday.

6ix9ine has been one of the most ascendant and controversial names in hip-hop in recent months. His album Day69: Graduation Day was among the top records on iTunes following its February release.

He is also known for the multiplatinum hit "Fefe" with Nicki Minaj, which peaked at No. 3 on the pop charts, and "Stoopid," featuring the incarcerated rapper Bobby Shmurda.

But 6ix9ine also has had a series of run-ins with law enforcement and has publicly identified himself as a member of a violent New York gang, 9 Trey Bloods, which was mentioned throughout the indictment.

Prosecutors said the gang carried out acts of murder, robbery and narcotics trafficking in Manhattan, the Bronx and Brooklyn since at least 2013.

The indictment said each gang member was required to participate in at least two acts of racketeering conspiracy. Those acts could include murder, robbery, extortion and drug distribution, the court papers said.

The 22-year-old recently pleaded guilty to disorderly conduct in Brooklyn Criminal Court in connection with a May traffic stop.

In a 2015 case in New York, 6ix9ine was sentenced to probation for his involvement in a sexually explicit video of a 13-year-old girl.

The video, posted on social media, showed the girl performing a sex act on another man while 6ix9ine "stands behind the child making a thrusting motion with his pelvis and smacking her on her buttocks," according to court documents.