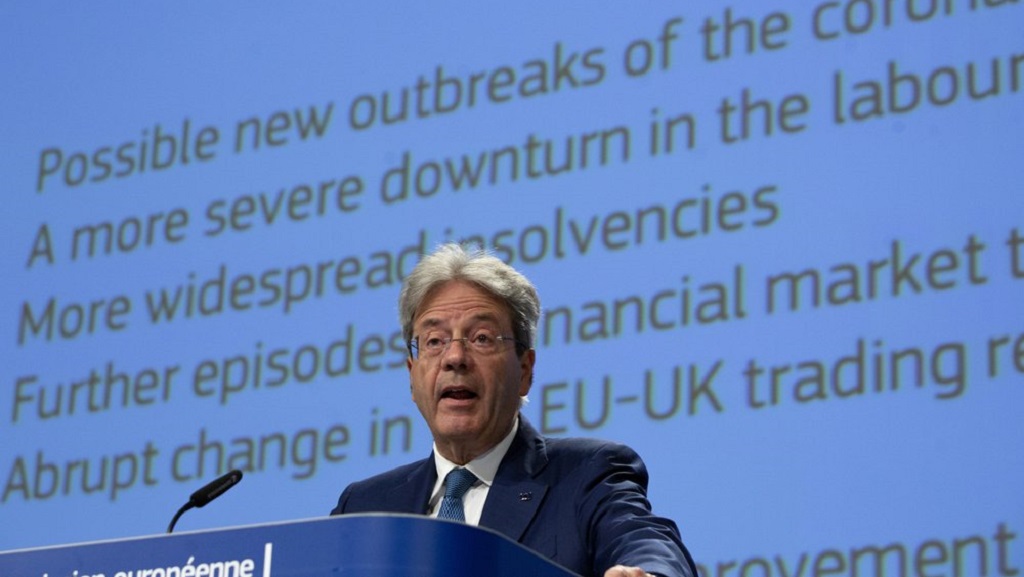 The European Union's executive arm forecasts that the bloc's economy will contract more than previously expected because of the coronavirus pandemic, which has caused lockdowns on business and public life that are only slowly being eased.

The 27-nation EU economy will contract by 8.3 percent this year, before growing 5.8 percent in 2021, according to the latest predictions released Tuesday by the European Commission.

"The road to recovery is still paved with uncertainty," EU Economy Commissioner Paolo Gentiloni told reporters in Brussels. "This is mostly linked to the epidemiological uncertainty."

In the previous forecasts released in May, when most of the continent was still under lockdown, GDP was forecast to contract by about 7.5 percent this year and to bounce back by 6 percent next year.

The European Commission said the impact on economic activity in 2020 will be worse than expected because "the lifting of lockdown measures is proceeding at a more gradual pace than assumed in our Spring forecast."

That was illustrated in separate data from Germany on Tuesday that showed industrial production rebounded in May but was far from making up for the collapse of the preceding months.

Gentiloni said that the EU's biggest challenge in the months to come will be to find the right balance between the necessity to reopen EU economies and the protection of citizens' health. More than 178,000 deaths related to COVID-19 have been recorded across the continent according to the latest numbers from the European Centre for Disease Prevention and Control.

"We have to live with the danger of local outbreaks" that could lead to plans to re-enter local lockdowns slowing down the economic recovery, Gentiloni said.

Although the EU as a whole has been hard-hit by the downturn, Gentiloni said the drop and the rebound will differ widely from one member country to another.

For instance, while Poland's economy is set to shrink by 4.6 percent this year, France, Italy and Spain are expected to experience double-digit drops.

To ensure a quick bounce back, Gentiloni urged member states to adopt as soon as possible a recovery fund aimed at pulling the EU out of the recession.

EU governments leaders and heads of state will meet next week in Brussels to try to reach a compromise on the 750 billion-euro package proposed by the commission.

Backed by Germany and France, the money in the fund would be incorporated in the 2021-2027 EU budget. Two-thirds of the fund would take the form of grants to be made available to EU countries, while the rest would be made up of conditions-based loans for that governments can apply for.

Gentiloni said the expected effects of the recovery plan have not been taken into account in the growth forecast, and that its quick implementation could help brighten the outlook.

"It's important that an agreement is reached swiftly," he said. "To inject new confidence and new financing into our economy in critical times."

Europe reopens many borders but not to Americans, Asians