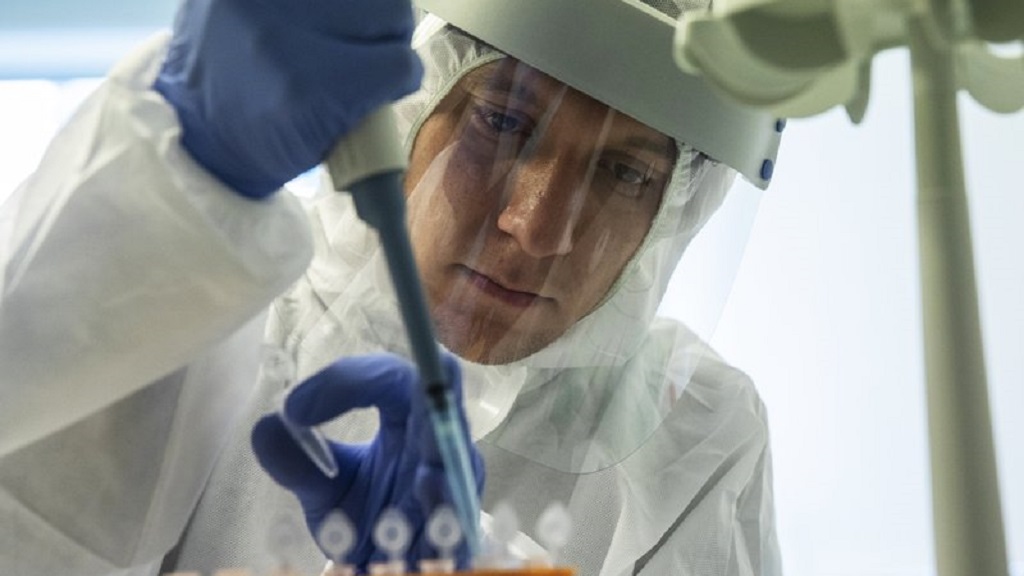 The European Union has signed a contract with British pharmaceutical giant AstraZeneca to provide a possible COVID-19 vaccine to its member states.

The EU Commission says the contract provides for the 27 EU nations to buy 300 million doses with an option for 100 million more. The contract also allows vaccines to be donated to poorer countries or redirected to other European nations.

EU Commission President Ursula von der Leyen says it was "an important step forward" in making sure any vaccine would be available to as many EU citizens as possible.

Vaccines typically take years to develop and more than a dozen are in the early stages of testing globally.

HERE'S WHAT YOU NEED TO KNOW ABOUT THE VIRUS OUTBREAK

— WHO warns of risk of young infecting the old

— Europe is going back to school despite recent virus surge

— The Food and Drug Administration authorized the first rapid coronavirus test that doesn't need any special computer equipment to get results.

— Latin America's evangelical churches hard hit by pandemic praying through face masks for the health of friends and family suffering from the coronavirus.

GENEVA — The World Health Organization's chief for Europe has warned COVID-19 is a "tornado with a long tail" and says increased case counts among young people could ultimately passed on to more vulnerable older people and cause an uptick in deaths.

Dr Hans Kluge said younger people are likely to come into closer contact with the elderly as the weather cools in Europe.

"We don't want to do unnecessary predictions, but this is definitely one of the options: That at one point there would be more hospitalizations and an uptick in mortality," he said from Copenhagen, the WHO Europe headquarters.

Kluge said 32 out of 55 state parties and territories in WHO's European region have seen a 14-day incidence rate increase of more than 10 percent, calling that "definitely an uptick which is generalized in Europe."

But he also suggested health authorities and other officials are better positioned and more prepared than in February, when the continent was on the cusp of a huge surge in cases and deaths.

NEW DELHI — An Indian government official says four members of the Great Andamanese tribe have tested positive for the coronavirus and are recovering in a hospital in the remote Andaman and Nicobar Islands.

Senior health officer Avijit Ray said they were among 59 members of the dwindling tribe who live in the Strait Island.

Ray said they apparently got the virus during a recent visit to Port Blair, the capital city of the Andaman and Nicobar Islands, a federally-administered Indian territory in the Bay of Bengal. They tested positive on Saturday,

Ray said all were recovering, adding that they tribal welfare department was looking after them.

The Andaman and Nicobar Islands, a chain of islands with a population of nearly 400,000, has reported 41 deaths and 2.944 positive cases so far.

PARIS — The government says the coronavirus is now actively circulating in about a fifth of France's regions and is allowing new local restrictions to avoid another national lockdown.

Despite the resurgence, the government is pushing ahead with plans to reopen all French schools next week, and to welcome workers back to their jobs after summer vacations blamed for spreading the virus.

France "must do everything to avoid a new confinement," Prime Minister Jean Castex told reporters Thursday. The government's main mantra this fall will be learning to "live with the virus."

He acknowledged that the rising cases this summer — attributed notably to vacation gatherings of families and friends — came earlier than authorities expected.

France is now seeing more than 50 positive tests per 100,000 people in Paris, Marseille and other areas.

The government announced Thursday that 21 administrative regions, or departments, are now in the "red zone" where the virus is actively circulating, and where local authorities can impose stricter rules on gatherings and movements.

Rolls-Royce says both engine deliveries and flying hours dropped by about 50 percent in the period, slashing revenue for a company that makes money both from selling jet engines and servicing them. The slump deepened during the second-quarter, when flying hours dropped 75 percent.

The company says it plans to sell parts of the business to raise more than 2 billion pounds. Rolls-Royce, which sold its luxury car division in 1998, also says it will cut another 5,000 jobs, adding to the more than 4,000 that have been eliminated since restructuring plans were announced in May.

JOHANNESBURG — Africa's top public health official says the continent has seen a 20 percent decrease in confirmed coronavirus cases in the past week, but he warns that "we shouldn't go home celebrating that our pandemic is over."

John Nkengasong with the Africa Centers for Disease Control and Prevention tells reporters that testing and other efforts to contain the virus are largely working, but just one or two cases could reignite infections.

He says 23 of Africa's 54 countries have reported a sustained decrease in new confirmed cases in the past couple of weeks.

The African continent has reported more than 1.2 million confirmed cases, roughly half in South Africa. More than 11 million tests for the virus have been conducted across the continent of 1.3 billion people, and Nkengasong says the new goal is an additional 20 million tests by November.

SEOUL, South Korea — North Korea has told the World Health Organization it tested 2,767 people for the coronavirus as of August 20 and that all have tested negative.

In an email to the Associated Press Thursday, Edwin Salvador, WHO's representative to North Korea, said the country is currently monitoring 1,004 citizens placed under quarantine. Salvador said the North told WHO that it has released 29,961 people from quarantine since December 31, including 382 foreigners.

The North has yet to confirm a single-case of COVID-19, but outsiders have widely doubted its virus-free claim.

In late July, North Korean leader Kim Jong Un ordered a lockdown of Kaesong, a city near the border with South Korea after the North reported it found a person with COVID-19 symptoms.

The North later told the World Health Organization the person's test results were inconclusive. Salvador said the WHO has yet to receive detailed information about the suspected case.

NEW DELHI — India has recorded another single-day record of new coronavirus cases, reporting 75,760 new confirmed infections in the past 24 hours.

The Health Ministry on Thursday also reported 1,023 deaths in the past 24 hours, taking total fatalities up to 60,472.

India's previous highest daily count was 70,488 on August 22. India has been recording more than 60,000 new infections per day for the last two weeks and now has reported 3.3 million cases since the pandemic began.

With an average of more than 800,000 tests every day, India has scaled up testing per million to more than 27,000, the ministry said.

It also said India's recovery rate is now around 76 percent with a fatality rate of 1.84 percent

India has reported the third most cases in the world after the United States and Brazil, and its reported fatalities are the fourth-highest in the world.

MELBOURNE, Australia — Australia's virus hotspot Victoria state has recorded its third deadliest day of the pandemic as well as the lowest tally of new COVID-19 infections in more than eight weeks.

The 23 dead reported Thursday followed 24 deaths on Wednesday. The all-time daily record of 25 deaths was set on August 17.

Victoria's Health Department said 22 of the most recent deaths were related to aged care.

But while 56 percent of British aged care homes had staff or residents infected with COVID-19, the proportion was only 8 percent in Australia, he said. Only four out of 700 aged care facilities in Victoria had been "acutely effected," he said.

"My fear when the COVID pandemic hit in Victoria was that we could have potentially seen far more," Morrison said.

The 113 new cases reported on Thursday was the lowest count since 87 on July 5.

UNICEF said in a report released Wednesday night that nearly 1.5 billion children were affected by school closures at the height of nationwide and local lockdowns.

"For at least 463 million children whose schools closed due to COVID-19, there was no such a thing as remote learning," UNICEF Executive Director Henrietta Fore said.

"The sheer number of children whose education was completely disrupted for months on end is a global education emergency," she said in a statement. "The repercussions could be felt in economies and societies for decades to come."

The country has added nearly 4,000 infections to its caseload while reporting triple-digit daily jumps in each of the past 14 days, prompting health experts to warn about possible strain on hospitals.

The 441 cases reported Thursday was the biggest daily increase since the 483 reported on March 7.

The National Assembly in Seoul was shut down and more than a dozen ruling party lawmakers were forced to isolate Thursday following a positive test of a journalist covering the parliament.

If the viral spread doesn't slow, health authorities have said they will consider elevating social distancing measures to the strongest "Level 3," which could include banning gatherings of more than 10 people and advising private companies to have their employees work from home.

How does coronavirus spread at a concert? Germans do a test