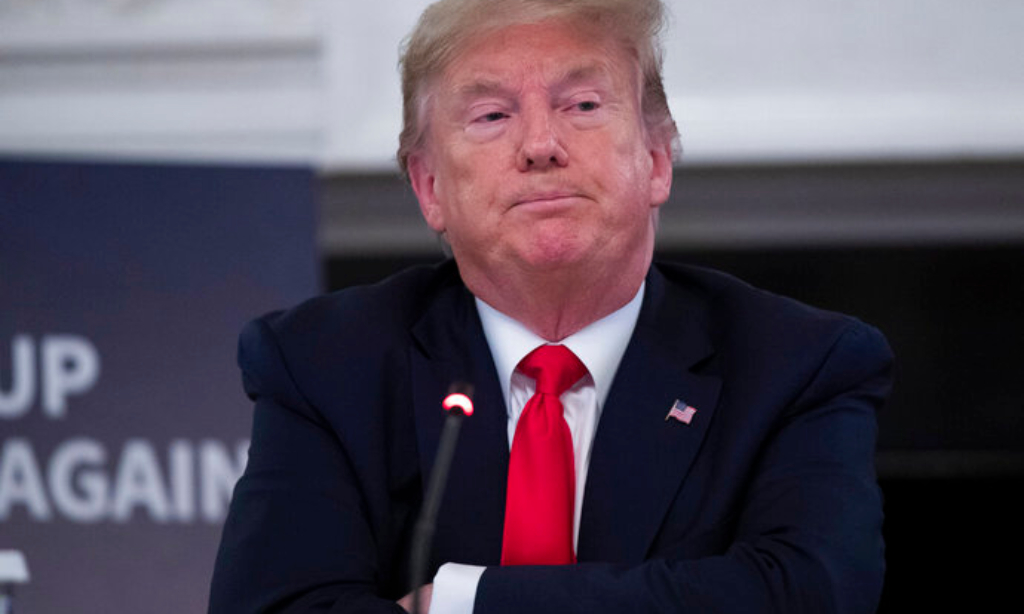 President Donald Trump folds his arms after speaking during a roundtable with industry executives about reopening the country after the coronavirus closures, in the State Dining Room of the White House, Friday, May 29, 2020, in Washington. (AP Photo/Alex Brandon)

The European Union is urging US President Donald Trump to rethink his decision to cut American funding for the World Health Organization (WHO) amid global criticism of the move.

The plea came today, Saturday (May 30) as spiking infection rates in India and elsewhere served as a reminder the global pandemic is far from contained.

Trump on Friday charged that the WHO didn’t respond adequately to the pandemic, accusing the UN agency of being under China’s “total control.”

European Commission President Ursula von der Leyen on Saturday urged Trump to reconsider, saying that “actions that weaken international results must be avoided” and that “now is the time for enhanced cooperation and common solutions.”

“The WHO needs to continue being able to lead the international response to pandemics, current and future,” she said. “For this, the participation and support of all is required and very much needed.”

Related article :Trump's cut in WHO funding will hurt Venezuelans, say US lawmakers

The US is the largest source of financial support for the WHO, and its exit is expected to significantly weaken the organization. Trump said the US would be “redirecting” the $450 million to “other worldwide and deserving urgent global public health needs,” without providing specifics.

The WHO wouldn't comment on the announcement but South African Health Minister Zweli Mkhize called it an “unfortunate” turn of events.

“Certainly, when faced with a serious pandemic, you want all nations in the world to be particularly focused ... on one common enemy,” he told reporters.

In China, where the virus outbreak began, only four new confirmed cases were reported Saturday, all brought from outside the country, and no new deaths. Just 63 people remained in treatment.

After judging the situation there now safe, a chartered flight carrying 200 German managers back to their jobs landed in Tianijin, a port city just east of Beijing. A flight carrying another 200 was due in Shanghai on Thursday.

“I'm really happy that business is starting again,” said Karin Wasowski, a Volkswagen employee, before boarding the flight in Frankfurt. “I've been working from a home office but that is, of course, something completely different to being there.”

“This is an important step to reconnect China’s and Germany’s economies,” said Jens Hildebrandt, executive director of the German Chamber of Commerce in North China, which helped organize the flights. “It is our common interest to contribute in helping the economy return to normalcy and pre-virus levels.”

Close to 6 million coronavirus infections have been reported worldwide, with more than 365,000 deaths and almost 2.5 million recoveries, according to a tally kept by Johns Hopkins University. The true dimensions are widely believed to be significantly greater, with experts saying many victims died without ever being tested.

As some countries have effectively lowered the rate of infections, they have been moving ahead with relaxing restrictions but are keeping a very close eye on developments.

In South Korea, credited with one of the most successful programs to fight the pandemic, there were 39 new cases reported Saturday, most of them in the densely populated Seoul metropolitan area where officials have linked the infections to warehouse workers. Authorities have so far maintained the phased reopening of schools in the hope that the recent transmissions could be contained quickly.

India registered another record single-day jump of 7,964 cases and 265 deaths, a day before it was to end its two-month-old lockdown.

Still, Prime Minister Narendra Modi, said in an open letter that India was on the path to “victory” in its battle against the virus and would “an example in economic revival,” while asking his countrymen to show “firm resolve.”

Russia recorded nearly 9,000 new cases overnight, around the daily level it has been at over the past two weeks as the virus continues to spread.

The national coronavirus task force said Saturday that 4,555 Russians have died of COVID-19, and 396,575 infections have been recorded. The relatively low mortality rate compared with other countries has prompted scepticism domestically and abroad.

UN Secretary-General Antonio Guterres announced two peacekeepers serving in Mali had died from the virus. There have been 137 confirmed cases of COVID-19 among peacekeepers, the majority in Mali, but these were the first deaths.

The US has been worst hit by the outbreak, with more than 1.7 million cases and almost 103,000 deaths.

Cities and states are under increasing pressure to reopen, however, especially for service industries that had seen customer numbers evaporate. The latest job-loss figures from the US Labor Department brought to 41 million the running total of Americans who have filed for unemployment since shutdowns took hold in mid-March.

But there have been worrying signs that as restrictions are eased, people have not been adhering to social distancing guidelines meant to help prevent the spread of the virus.

On Friday, health officials in Missouri said that they were seeking to “inform mass numbers of unknown people” after a person who attended crowded pool parties over Memorial Day weekend at the state's popular Lake of the Ozarks tested positive for COVID-19.

German Chancellor Angela Merkel's office said Saturday that as things stand with the American pandemic situation, if Trump decides to go ahead with the Group of Seven summit in the US as he has suggested he might, she would not attend in person.

Millions being paid out through NIS, Welfare to over 25,000 post-COVID

China announces $2 billion in coronavirus help at WHO assembly