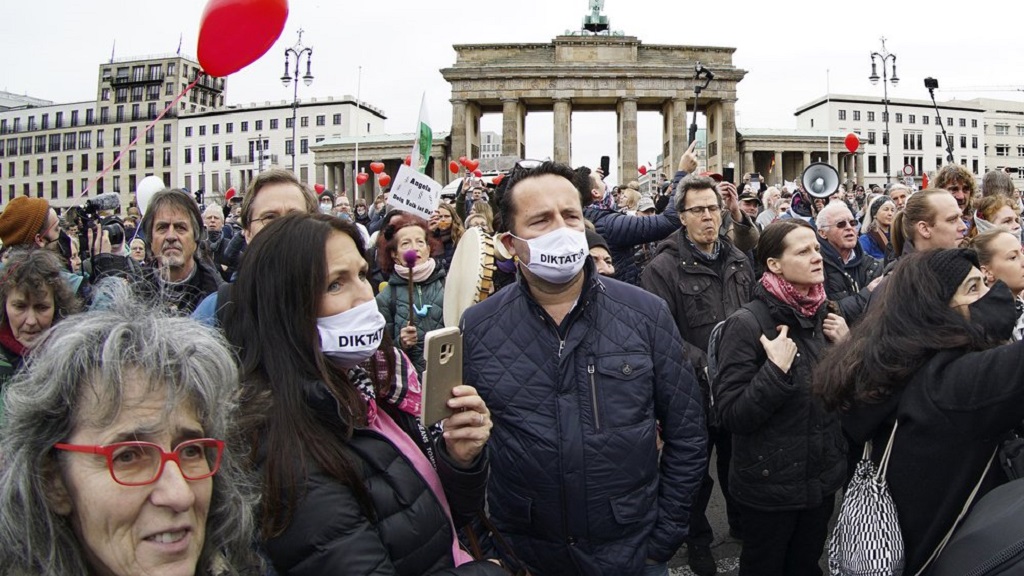 People attend a protest rally in front of the Brandenburg Gate in Berlin, Germany, Wednesday, Nov. 18, 2020 against the coronavirus restrictions in Germany. Police in Berlin have requested thousands of reinforcements from other parts of Germany to cope with planned protests by people opposed to coronavirus restrictions. Word on the mask reads 'Dictatorship'. (AP Photo/Michael Sohn)

In its latest epidemiological report on the COVID-19 pandemic, the UN health agency said for the first time in more than three months, cases in Europe have dropped about 10 per cent, suggesting that recent lockdown measures across the continent are having an effect.

Still, WHO said that the number of deaths in Europe "increased substantially," with more than 29,000 deaths last week. Significant spikes in cases and deaths were also seen in the Americas; Southeast Asia was the only region that saw a drop in cases and deaths.

In European countries, WHO said the sharpest rise in coronavirus cases was in Austria, which saw a 30 per cent increase compared to the previous week. WHO also noted the UK was the first country in the region to record more than 50,000 deaths. Globally, the countries with the biggest number of cases were: the US, India, Italy, France, and Brazil.

— Coronavirus spikes and strained health care facilities in southern Italy mean many flee to the north for better COVID-19 treatment.

— Iowa Sen. Chuck Grassley, 87, says he has tested positive for the coronavirus

— Toilet paper limits, empty shelves are back as virus surges

Here's what else is happening:

GAZA CITY, Gaza Strip — Gaza's Health Ministry has reported 600 new coronavirus cases and four deaths over the last 24 hours, the highest daily increase of both since the pandemic reached the isolated Palestinian territory.

Gaza has been under an Israeli and Egyptian blockade since the Islamic militant group Hamas seized power there in 2007, and its health system has been severely degraded by years of conflict and isolation.

Authorities have reported more than 12,000 coronavirus cases and 54 deaths so far.

Hamas has periodically ordered the closure of schools, businesses and mosques to contain the spread. A prolonged lockdown would compound the economic woes of the territory's 2 million Palestinian residents.

LONDON -- Dido Harding, who leads the National Health Service's test and trace program in England, has been told by the service she runs that she needs to self-isolate after potentially coming into contact with someone who has tested positive.

In a tweet Wednesday, Harding showed a screenshot of an app notification carrying the message "you need to self-isolate" through November 26. She added: "Nothing like personal experience of your own products."

Harding, a former chief executive of the British telecommunications company TalkTalk, has faced widespread criticism for apparent failings in the test and trace service.

Her husband, John Penrose, a Conservative Party lawmaker, had previously been told to self-isolate.

British Prime Minister Boris Johnson is also having to self-isolate after a meeting with another Conservative lawmaker who later tested positive.

TOKYO — Authorities in Tokyo have announced nearly 500 new cases of the coronavirus, the biggest daily increase in the Japanese capital since the pandemic began, amid a nationwide spike in infections and as the country discusses with Olympic officials how to safely host next summer's games.

International Olympic Committee President Thomas Bach ended his visit to Japan to discuss with Japanese Olympic officials how to safely host the games, which were postponed until next July due to the pandemic.

Japan has seen a steady climb in new cases nationwide in recent weeks, and experts have urged officials to step up preventive measures. Japan has confirmed 120,815 cases, including 1,913 deaths.

The National Audit Office said in a report published Wednesday that companies with links to politicians were fast-tracked and had more chance of getting a contract than other applicants.

Like many countries, the UK was caught without enough masks, gowns, gloves and other equipment to keep health care workers and the public safe as coronavirus cases skyrocketed.

In the push to build up stocks, the government awarded 8,600 contracts worth18 billion pounds ($24 billion) between March and July, most without a competitive tender process.

The auditor said in a sample of cases it studied, "departments failed to document key decisions, such as why they chose a particular supplier or used emergency procurement, and failed to document their consideration of risks, including how they had identified and managed any potential conflicts of interest."

HARARE, Zimbabwe — Zimbabwe has closed a school after 100 students tested positive for COVID-19, state media reports, as authorities warn of the risk of a new wave of infections in a country that has so far recorded few cases.

The John Tallach Secondary School in the country's west has been turned into a quarantine center, the Herald newspaper quotes Oppah Muchinguri-Kashiri, chair of the country's COVID-19 taskforce, as saying. She says 73 students are asymptomatic and 27 show mild symptoms. An undisclosed number of teachers also tested positive.

Authorities suspect that a pupil who recently travelled to neighbouring South Africa infected the others, the paper reports. South Africa, with more than 750,000 recorded infections, has the highest confirmed COVID-19 cases in Africa.

BEIJING — China reported one new local coronavirus infection on Wednesday as the country increasingly focuses on the possibility the virus might be spread on frozen food packaging.

The National Health Commission said the new case was detected in the northern port city of Tianjin just east of Beijing. The confirmed case, along with another person who tested positive without showing symptoms, were both previously quarantined under suspicion of having the virus.

Another seven cases were brought from outside the country, the commission reported, raising China's total to 86,369 with 4,634 deaths since the virus was first detected in the central Chinese city of Wuhan late last year.

Authorities in several cities and provinces have reported detecting the virus on packaging of frozen seafood and meat imported from countries ranging from Germany to India.

SYDNEY — The Australian state of South Australia will begin a six-day lockdown at midnight Wednesday, with schools, universities, bars and cafes closed.

Only one person from each household will be allowed to leave home each day, and only for specific reasons. The restrictions also require most factories to close, nursing home facilities to go into lockdown, and weddings and funerals to be put on hold. Outdoor exercise is banned, and wearing masks is mandatory.

Officials announced the severe move Wednesday after a cluster of new coronavirus cases grew to 22. Premier Steven Marshall says he believes the lockdown will act as a "circuit-breaker" and reduce the risk of the outbreak spreading further.

Under rules taking effect Thursday for two weeks, no more than 100 people can attend rallies, festivals and concerts. People will have to sit at least one seat apart at theaters, concert halls and libraries, while sporting events are limited to 30 per cent capacity.

LOS ANGELES — Los Angeles County has imposed new restrictions on businesses and is readying plans for a mandatory curfew for all but essential workers if coronavirus cases keep spiking.

The county of 10 million people has seen daily confirmed cases more than double in the last two weeks to nearly 2,900.

On Tuesday, officials ordered non-essential retail businesses to limit indoor capacity to 25 per cent and restaurants to 50 per cent capacity outdoors. All such businesses must close by 10 p.m. The changes take effect Friday.

If daily cases rise to 4,500 and hospitalizations top 2,000, the county will impose a three-week lockdown that will restrict people to their homes for all but essential trips. A nighttime curfew would run from 10 p.m. to 6 a.m.

WASHINGTON — The White House coronavirus task force is warning of the "aggressive" and "unrelenting" spread of the coronavirus as the nation heads into the Thanksgiving holiday.

A senior administration official said Tuesday that scientists and public health experts sounded alarm about the spread of the virus, which is on the upswing across the entire nation.

In its weekly report, the task force says there is "aggressive, unrelenting, expanding broad community spread across the country, reaching most counties, without evidence of improvement but rather, further deterioration."

It says existing efforts to slow the spread "are inadequate and must be increased to flatten the curve." The panel also says Thanksgiving travel and gatherings could "amplify transmission considerably."

The guidance is a departure from the public comments of President Donald Trump and Vice President Mike Pence, who have emphasized progress in vaccine development. But experts warn that tens of thousands of Americans will die before there is widespread distribution of a vaccine.

CHICAGO — Public schools in Chicago will resume in-person learning beginning in January, with officials saying remote learning instituted in March due to the coronavirus pandemic has not well-served many students.

Officials said Tuesday that pre-kindergarten and students enrolled in intensive and moderate cluster classrooms will begin in-person learning on Jan. 11. Kindergarten through 8th grade students will return to classrooms on Feb. 1. A return date for high school students is still under consideration.

The school district will allow parents to decide whether they want their children to return to school. Chicago Mayor Lori Lightfoot says that many students did well with remote learning but the youngest children, Black and Hispanic students, and highest-need learners haven't been served.

NEW ORLEANS — The raucous Mardi Gras parades where riders on elaborate floats toss trinkets to adoring throngs have been cancelled in New Orleans because the close-packed crowds could spread the coronavirus.

At least for the 2021 season, the pandemic has put an end to the New Orleans Mardi Gras as it has long been celebrated. City spokesman Beau Tidwell said Tuesday that no parades will roll during the weeks leading up to and including Fat Tuesday because they can't meet restrictions meant to slow the spread of the novel coronavirus that causes COVID-19.

The cancellation is based largely on a 250-person cap on outdoor crowds. Tidwell says: "You can't have traditional parades with that small a group."

World leaders talking to Biden about the virus, other issues