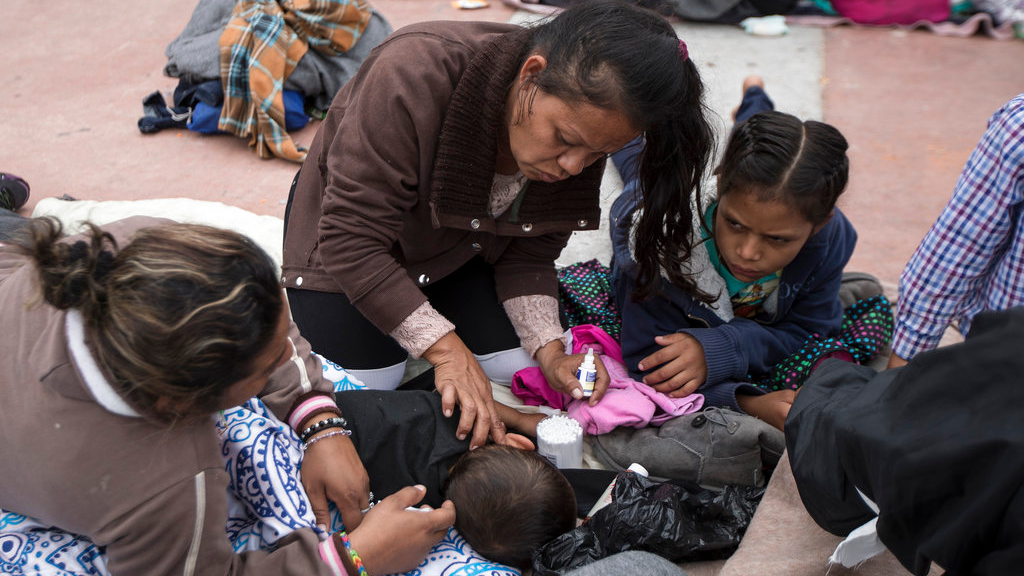 A two-year-old child from Honduras gets treatment for an ear infection after sleeping in the open in front of the El Chaparral port of entry, in Tijuana, Mexico. (AP Photo/Hans-Maximo Musielik)

U.S. border inspectors allowed some of the Central American asylum-seekers to enter the country for processing, ending a brief impasse over lack of space. Now, the migrants who crossed Mexico in a caravan may face a long legal path.

U.S. Customs and Border Protection didn't say how many caravan members were allowed in Monday, but organizers said there were eight.

About 140 others were still waiting in Mexico to turn themselves in at San Diego's San Ysidro border crossing, the nation's busiest, said Alex Mensing, project organizer for Pueblo Sin Fronteras, which is leading the caravan.

"The spirits are high, there was good news for everybody," Mensing said on the Mexican side of the crossing, moments after learning that some were allowed in.

American attorneys who volunteered advice in Tijuana last week warned the Central Americans that parents may be separated from their children and be detained for many months while their asylum cases are pending.

Asylum-seekers are typically held up to three days at the border and turned over to U.S. Immigration and Customs Enforcement. If they pass an asylum officer's initial screening, they may be detained or released with ankle monitors while their cases wind through immigration court, which can take years.

Nearly 80 percent of asylum-seekers passed the initial screening from October through December, but few are likely to win asylum.

The denial rate for El Salvadorans seeking asylum was 79 percent from 2012 to 2017, according to Syracuse University's Transactional Records Action Clearinghouse. Hondurans were close behind with a 78 percent denial rate, followed Guatemalans at 75 percent.

Trump administration officials have railed against what they call "legal loopholes" and "catch-and-release" policies that allow people seeking asylum to be freed while their cases are adjudicated. The president tweeted Monday that the caravan "shows how weak & ineffective U.S. immigration laws are."

U.S. Customs and Border Protection said it processed hundreds of asylum-seekers in the previous week, many of them Mexican, which contributed to a bottleneck that led inspectors to turn away caravan members since they arrived late Sunday afternoon.

Asylum-seekers didn't appear to be thrown off the by the delay.

Elin Orrellana, a 23-year-old pregnant woman from El Salvador, said she is fleeing the violent MS-13 street gang, a favorite target of both Sessions and Trump because of their brutal killings in communities in the United States. She said her older sister had been killed by the gang in El Salvador, so she is attempting to join other family members in the Kansas City area.

"Fighting on is worth it," she said as she camped out Sunday for chilly night outside the border crossing.

Customs and Border Protection has room for about 300 people at the San Diego border crossing.

"As in the past when we've had to limit the number of people we can bring in for processing at a given time, we expect that this will be a temporary situation," the agency said.

During a surge of Haitian arrivals at the San Diego crossing in 2016, Customs and Border Protection required people to wait more than five weeks in Mexico. Since then, smaller upticks of Mexican asylum-seekers have caused delays of several hours.

US says border crossing didn't have room for asylum seekers