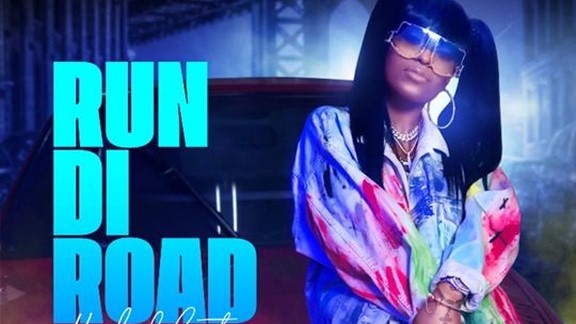 Success has been a fast train for HoodCelebrityy.

Pushed into the spotlight when Cardi B made her video for her song “Wine Pon It,” viral when she posted it in 2015, the Jamaican-born singer has seen her star ascend rapidly.

Now signed to Epic Records, she today dropped the video for her single ‘Run di Road’, a song that puts a modern twist to Chaka Demus and Pliers’ ‘Murder She Wrote’. Her debut album is expected to be released this year.

Looking back on her journey, HoodCelebrityy, real name Tina Pinnock, is not taking anything for granted.

“I was always working since I was 17. I am the oldest of three brothers and one sister so I was helping with the bills. Working a 9 to 5 job to moving my mum to Philadelphia…coming from that and then signing my first record label deal in 2018, I feel like success happens so fast you forget to appreciate it. I had to learn to be grateful otherwise God could take it away,” she told Loop.

Like many of her generation, HoodCelebrityy used social media to get her name and talents known and has kept growing fanbase since the Cardi B shoutout, even sharing with them intimate moments such as her writing process for the very emotional ‘Daughter’s Cry’ a song dedicated to her absent father.

As such, her videos attract millions of views, ‘Trophy Wife’ being one of the most popular with 39 million views on YouTube since its release a year ago.

HoodCelebrityy stays close to her Jamaican roots in her music. Growing up in St Catherine’s, Jamaica, she only listened to dancehall and reggae. But when she migrated to the US at the age of 12, growing up in the Bronx, she was exposed to people of all races and nationalities, particularly Hispanic.

These influences will be reflected on her upcoming album.

She also expressed interest in doing a soca record. HoodCelebrityy got a taste of soca when she featured on the remix of Nessa Preppy’s ‘Issa Snack” alongside Machel Montano last year.

“I like every type of music as long as it makes me feel good.”

As one of the rising stars of Caribbean descent on the music scene, HoodCelebrityy said there is definitely a global movement embracing Caribbean culture and helping it to grow like artistes such as Drake and Tory Lanez have been doing.

She said there is also more unity among the females.

Despite her gender and roots, HoodCelebrityy does not want to be compared to any other artiste out there.

She said: ‘’I am different. I don’t want to be like anyone else, I want to be myself.’