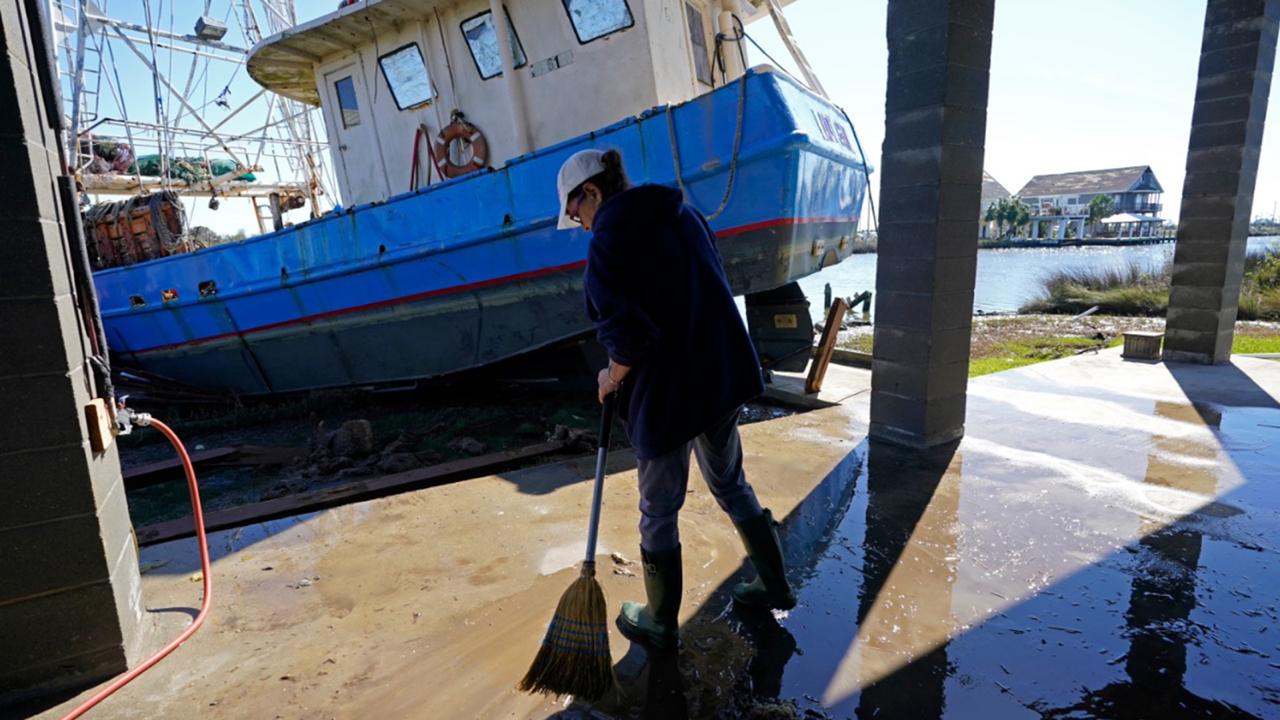 Ray Garcia sweeps water from her home after a boat washed up against it, in Lakeshore, Miss., Thursday, October 29, 2020. Hurricane Zeta passed through Wednesday with a tidal surge that caused the boat to become unmoored. (AP Photo/Gerald Herbert)

Millions of people were without power and at least six were dead Thursday after Hurricane Zeta slammed into Louisiana and made a beeline across the South, leaving shattered buildings, thousands of downed trees and fresh anguish over a record-setting hurricane season.

From the bayous of the Gulf Coast to Atlanta and beyond, Southerners used to dealing with dangerous weather were left to pick up the pieces once again just days ahead of an election in which early voting continued despite the storm.

In Atlanta and New Orleans, drivers dodged trees in roads and navigated intersections without traffic signals. In Lakeshore, Mississippi, Ray Garcia returned home to find a shrimp boat washed up and resting against its pilings

"I don’t even know if insurance is going to pay for this,” Garcia said. “I don’t know what this boat has done.”

As many as 2.6 million homes and businesses lost power across seven states, but the lights were coming back on slowly. The sun came out and temperatures cooled, but trees were still swaying as the storm's remnants blew through.

“Oddly enough, it isn’t the storms that typically produce the most injuries and the fatalities. It’s the cleanup efforts. It’s the use of generators. It’s the carbon monoxide poisoning. It’s the electrocution that comes from power lines. So, now is the time to be very, very cautious out there,” Edwards said.

Lines of cars stretched more than 20 deep at one of the few gas stations open in Marrero, Louisiana. The owner was using an industrial generator to run the pumps and accepting cash only.

“The wait is kind of ridiculous, but it is what it is, you know?” said resident Jeanne Guillory. “I have no lights. I have no idea how long I’ll be without power. I’m hopeful that my generator gets fixed. That’s why I’m coming to put gas in the tanks. If it doesn’t, then I guess I just have a lot of gas to ride the four-wheeler."

A Category 2 hurricane when it hit the southeastern Louisiana coast Wednesday, Zeta weakened to a post-tropical storm by Thursday afternoon with maximum sustained winds of 50 mph (85 kph), according to the US National Hurricane Center.

The fast-moving storm was centred about 25 miles (40 kilometres) southwest of Cape May, New Jersey, and forecast to head east-northeast over the open Atlantic.

North Carolina and southeastern Virginia were still being buffeted with gusty winds, but Zeta was moving along at 53 mph (85 kph), meaning no single place was blasted too long.

Will Arute of New Orleans said it sounded like a bomb went off when part of a large oak snapped outside and crashed into his car and a corner of his home.

“I did not anticipate this to happen. It was pretty intense along the eyewall when it went through here," he said.

Mackenzie Umanzor didn't make many preparations because the last hurricane to threaten her home in D’Iberville, Mississippi, a few weeks ago, did little damage. Zeta blew open doors she had tried to barricade, leaving her with a cut hand, and the top of her shed came loose.

“You could hear the tin roof waving in the wind. And there was a couple of snaps, lots of cracks of branches and trees falling," she said. "It was pretty scary.”

A man was electrocuted in New Orleans, and four people died in Alabama and Georgia when trees fell on homes, authorities said. They included two people who were left pinned to their bed, Gwinnett County fire officials said.

And in Biloxi, Mississippi, Leslie Richardson, 58, drowned when he was trapped in rising seawater after taking video of the raging storm.

Richardson and another man exited a floating car and desperately clung to a tree before his strength “just gave out,” Harrison County coroner Brian Switzer said.

Mayor Sheldon Day of Thomasville, Alabama, said hundreds of trees fell in roads and on homes, while some gas station canopies blew over.

“At one point, every major thoroughfare was blocked by trees,” Day said.
Hundreds of miles away in North Carolina, a highway was blocked by a toppled tree in Winston-Salem, and Wake Forest University cancelled classes for the day.

Zeta was the 27th named storm of a historically busy year with more than a month left in the Atlantic hurricane season. It set a new record as the 11th named storm to make landfall in the continental US in a single season, well beyond the nine storms that hit in 1916.

“We’re still assessing the situation and obviously some counties will be delaying early voting this morning, but we don’t see that there will be an overall impact on voting,” Georgia Secretary of State Brad Raffensperger said.

Thursday was the last day to request an absentee ballot or vote by absentee in person in Alabama, and voters, some holding umbrellas, waited outside county courthouses in Birmingham and Tuscaloosa to cast ballots.

Just outside Richmond, Virginia, health and nutrition entrepreneur Shireese Borden, 28, waited in line for nearly an hour at an early-voting site as heavy rains from Zeta swept through.

She hadn't expected the crowd of over 200 other people who were doing the same thing.

“I figured it would be kind of perfect," Borden said, "but apparently not.”