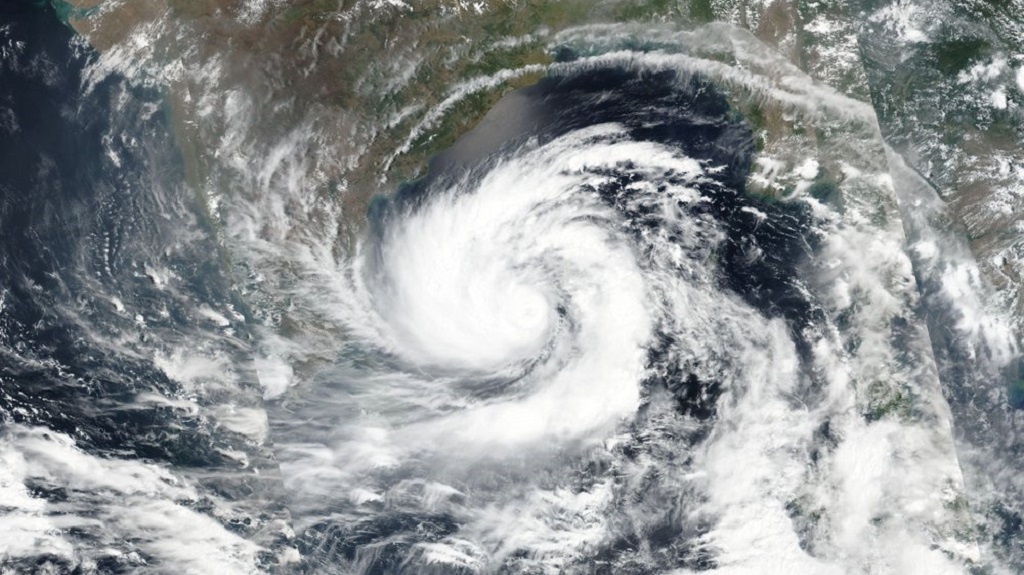 This May 17, 2020, satellite image released by NASA shows Cyclone Amphan over the Bay of Bengal in India. Amphan has intensified into a super cyclone and expected to make a landfall near Sundarbans, south of Kolkata, on Tuesday evening, May 19, 2020. A red alert has been initiated to sea bound fishermen and disaster management teams started evacuating villagers from the sea front. (NASA Worldview, Earth Observing System Data and Information System (EOSDIS) via AP)

A powerful cyclone was moving toward India and Bangladesh on Tuesday as authorities tried to evacuate millions of people while maintaining social distancing.

Cyclone Amphan is expected to make landfall on Wednesday afternoon, and forecasters warned of extensive damage from high winds, heavy rainfall, tidal waves and some flooding in crowded cities like Kolkata.

The cyclone had winds of 220-230 kilometres per hour (136-142 miles per hour) and is forecast to weaken before it makes landfall around India's West Bengal state and Bangladesh.

It is the second super cyclone on record that has formed over the Bay of Bengal, said Mrutyunjay Mohapatra, India's meteorological chief. The first was a devastating 1999 cyclone in Odisha state that left nearly 10,000 people dead.

"This type of cyclone can be disastrous," Mohapatra said.

Videos and photos from India and Bangladesh showed families near the coast or in other flood-prone areas being evacuated to cyclone shelters. Some carried bags with their belongings, and all had their faces covered. Officials went from village to village with loudspeakers warning people of the storm.

"Evacuations are necessary," warned Mohapatra, pointing out that tidal waves could move 25 kilometers (15 miles) inland along the many rivers that crisscross the Bengal delta.

Authorities in Bangladesh warned that the cyclone could flood vast swaths of southwestern and southern areas. Junior Minister for Disaster Management and Relief Enamur Rahman said evacuations had begun in the southwest, where residents of Satkhira district, which was devastated by a 2009 cyclone, will be moved to shelters.

Rahman said he ordered local authorities to prepare thousands of shelters and makeshift structures to protect more than 5 million people before the cyclone crosses the region.

"We will not have much time tomorrow as the cyclone is expected to make landfall Wednesday evening," the minister said.

Amphan's winds were whirling as far as 700 kilometres (435 miles) from its eye as it approached land. It is forecast to pass between the seaside resort town of Digha in India's West Bengal state and Hatiya Island in Bangladesh with a weaker wind speed of 165 to 175 kph (102-108 mph).

Several districts in West Bengal will feel the brunt of the storm, Mohapatra said. Flooding is a risk in Kolkata due to crowding and poor drainage, and the storm surge could raise river levels in the Bengal delta, he said.

Fishing trawlers and boats in the Bay of Bengal have been told to take shelter until further notice.

After reaching land, the cyclone is expected to move away fast and weaken by Thursday.

The eye of the storm is likely to pass through the Sunderban mangrove forests, one of the largest tracts of mangroves in the world. They are likely to absorb some of the impact, officials said.

Debasis Shyamal, a fisherman in Digha, said evacuations had yet to start, but people were staying indoors.

"We are mentally prepared for the cyclone, but there are some concerns about social distancing," he said.