IOC gets official look at simplification for Tokyo Olympics 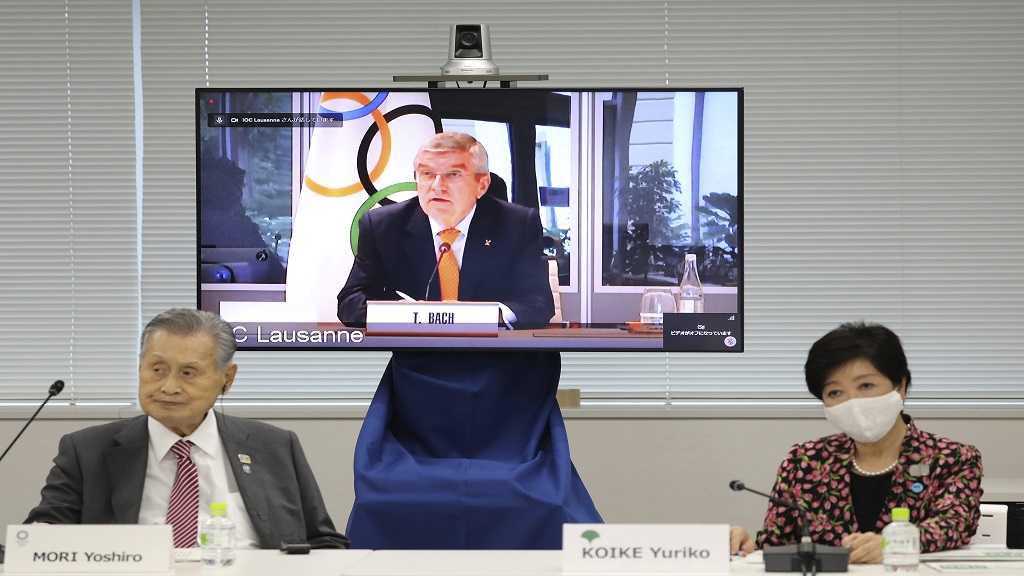 In this Sept. 24, 2020, file photo, IOC President Thomas Bach, on the screen, speaks remotely with Tokyo 2020 Organising Committee President Yoshiro Mori, left, and Tokyo Gov. Yuriko Koike, right, during an on-line meeting focused on how to pull off the delayed Tokyo Games, in Tokyo. (Du Xiaoyi/Pool Photo via AP).

The International Olympic Committee (IOC) and local organisers are trying to “simplify” the postponed Tokyo Olympics, promising to save money in what one study says is already the most expensive Summer Olympics on record.

The executive board of the IOC is expected to review the proposed cuts on Wednesday. They include about 50 changes to fringe areas that leave the number of athletes — 15,400 for the Olympics and Paralympics — and all sports events untouched for next year.

Also largely untouched will be the opening and closing ceremonies, the heavily sponsored 121-day torch relay, and competition areas that will be seen on television broadcasts. This means the so-called field of play, and areas immediately adjacent.

Some of the proposed cuts listed in a detailed document from the organisers include: fewer decorative banners; a 10-15% reduction in “stakeholders" delegation sizes; five fewer international interpreters from a staff of 100; fewer shuttle buses; reduction in hospitality areas; suspension in production of mascot costumes; cancellation of official team welcome ceremonies.

Big savings are not easy to find.

Organisers and the IOC say they had already slashed several billion dollars in costs before the Olympics were postponed six months ago because of the COVID-19 pandemic. This included moving events to existing venues rather than building new facilities.

Most of the big-ticket spending had already taken place, such as the $1.43 billion national stadium, and the $520 million swimming venue.

“We have many measures, and sometimes they look small. But when you take them all together it will represent a large result in terms of both simplification and hopefully ... produce some significant savings,” Christophe Dubi, the IOC executive director for the Olympic Games, said late last month when the plans were presented in Tokyo.

Dubi said a search for more cuts would continue.

Tokyo and the IOC have not offered an estimate of the savings, but estimates in Japan put them at 1-2% of official spending of $12.6 billion. However, a government audit last year said the real cost of the Olympics might be twice that much.

All of the costs for putting on the Olympics come largely from public money with the exception of $5.6 billion from a privately financed local operating budget. About 60% of the income in this budget — $3.3 billion — comes from payments from 68 domestic sponsors.

Organising committee CEO Toshiro Muto acknowledged last month for the first time that some sponsors have backed out in the midst of a slumping economy, the pandemic, and uncertainty around the Olympics really happening.

“I can’t say that all contracts have been renewed,” he said.

Any shortfall in this privately funded operating budget will have to be made up from somewhere else. The document handed out last month by organizers showed them considering “measures to increase” donations to make up for lost income.

To keep sponsors on board, the IOC and local organisers have talked confidently in the last several months about the Olympics opening as planned on July 23, 2021.

Yoshiro Mori, the president of the organising committee, acknowledged last month that some were hoping for more cuts, while others will be satisfied with the modest savings.

“It’s like a glass half-filled, or half empty," he said. “We wanted to save, but there were so many thing that have already been determined.”

Organisers have said it won't be until the end of the year, or early in 2021, when detailed steps will be announced about how to hold the Olympics in the midst of a pandemic. This will include decisions about attendance by local fans, non-Japanese fans, and rules under which athletes will enter Japan, vaccines, quarantines, and so forth.

Japan has reported about 1,600 deaths from COVID-19 and has had strict entry rules in place for citizens from 159 countries.