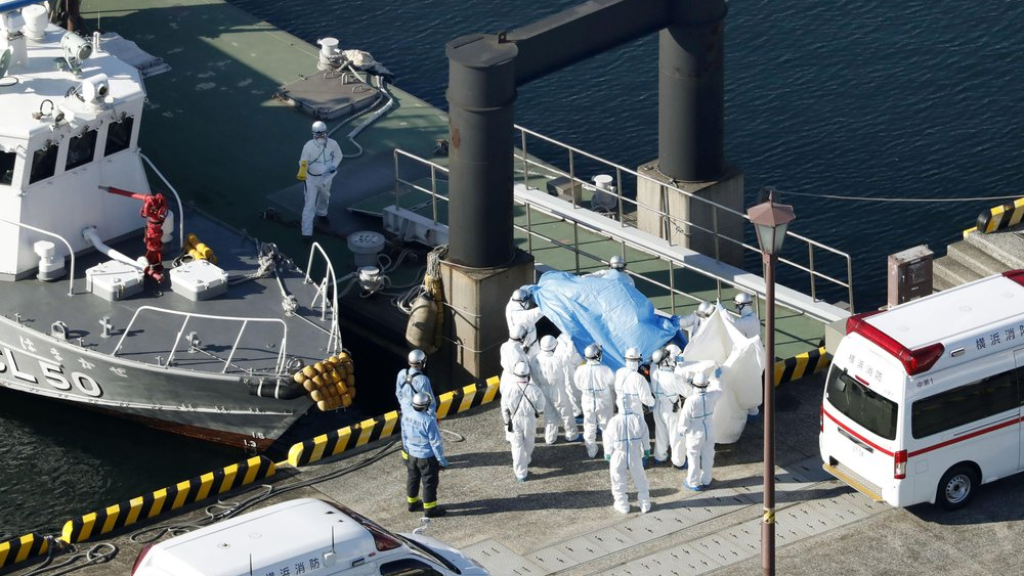 Large white sheets covering them head-to-knee, people infected with a new virus were led by gloved and masked officials Wednesday off a Japanese cruise ship that's being quarantined amid growing worry about the spread of an outbreak.

The quarantine of 3,711 people aboard the Diamond Princess is part of a global health emergency that seems to worsen by the day.

The little-understood new coronavirus has killed 490 people in mainland China, officials said Wednesday. But it has also spread panic and discrimination around the world as the number of cases grow.

More than 1,800 people on another cruise ship were being screened in Hong Kong after three passengers on a previous voyage were diagnosed with the virus.

Thousands of hospital workers in Hong Kong were striking to demand the border with mainland China be closed completely. And on the mainland, patients were being treated in newly built or converted hospitals while some at overcrowded facilities sat on the floor.

Tokyo Olympics organizers said they are increasingly worried about the disruption the virus is causing ahead of the games, which open in less than six months.

As examples of anti-Asian discrimination mount, UN Secretary-General Antonio Guterres appealed for "international solidarity" and support for China and other countries hurt by the virus. He urged a stop to any stigmatization of innocent people.

In the port city of Yokohama, just outside Tokyo, health workers, some in protective white jumpsuits, transferred 10 patients from the Diamond Princess cruise ship to a Japanese coast guard boat next to it. The 10, covered in sheets to protect their identities from cameras, were taken to a dock and put on ambulances bound for hospitals for treatment in isolation.

Health Minister Katsunobu Kato said all the people on board will be quarantined on the ship for up to 14 days under Japanese law. The ship had 2,666 passengers and 1,045 crew members. Tests were pending on 273 people who had symptoms or had contact with a man who was diagnosed with the virus after leaving the ship in Hong Kong.

In Hong Kong, hospital workers were striking to demand the border with mainland China be shut completely to ward off the virus. Hospitals said they had to cut some services due to striking workers' absences.

The territory's beleaguered leader, Carrie Lam, criticized the strike and said the government was doing all it could to limit the flow of people across the border. Almost all land and sea links have been closed, but the striking workers want the border shut completely.

"Important services, critical operations have been affected," Lam told reporters. "So I'm appealing to those who are taking part in this action: Let's put the interests of the patients and the entire public health system above all other things."

The infections on the cruise ship raised Japan's total to 33 cases. South Korea and Thailand reported recent cases among people who had not been to China, raising concerns about how easily the virus might be spreading in other places.

To treat the thousands of patients in its hard-hit central region, China built a new hospital in a matter of days and converted a gymnasium, exhibition hall and cultural centre.

Patients were being moved into a 1,000-bed hospital with prefabricated wards and isolation rooms in Wuhan. A 1,500-bed hospital also specially built for virus patients opens Thursday. The hospitals made from converted public spaces to treat patients with mild symptoms have a total of 3,400 beds, the simple cots placed in tight rows in cavernous rooms without any barriers between them.

One man, Fang Bin, said he saw wards so crowded during a visit to the city's No. 5 Hospital on Saturday that some patients were forced to sit on the ground.

With the epicentre of the outbreak, Wuhan, cut off by rail, air and road to try to contain the virus, the United States and other countries were organizing more evacuation flights for their citizens still in the central Chinese city.

Two of the latest planes returned to Russia and New Zealand on Wednesday, with the returnees quarantined for the maximum incubation period of the virus.

Dr David Heymann, who led the World Health Organization's response to the SARS outbreak, said it's too early to tell when the new coronavirus will peak, but that it appears to still be on the increase.

WHO director-general Tedros Adhanom Ghebreyesus urged countries outside China to share more data on infections, saying detailed information has been provided in only 38% of cases.

"Without better data, it's very hard for us to assess how the outbreak is evolving or what impact it could have and to ensure we're providing the most appropriate recommendations."

Coronavirus: Low risk for St Vincent and the Grenadines

WHO working with Google to combat virus misinformation