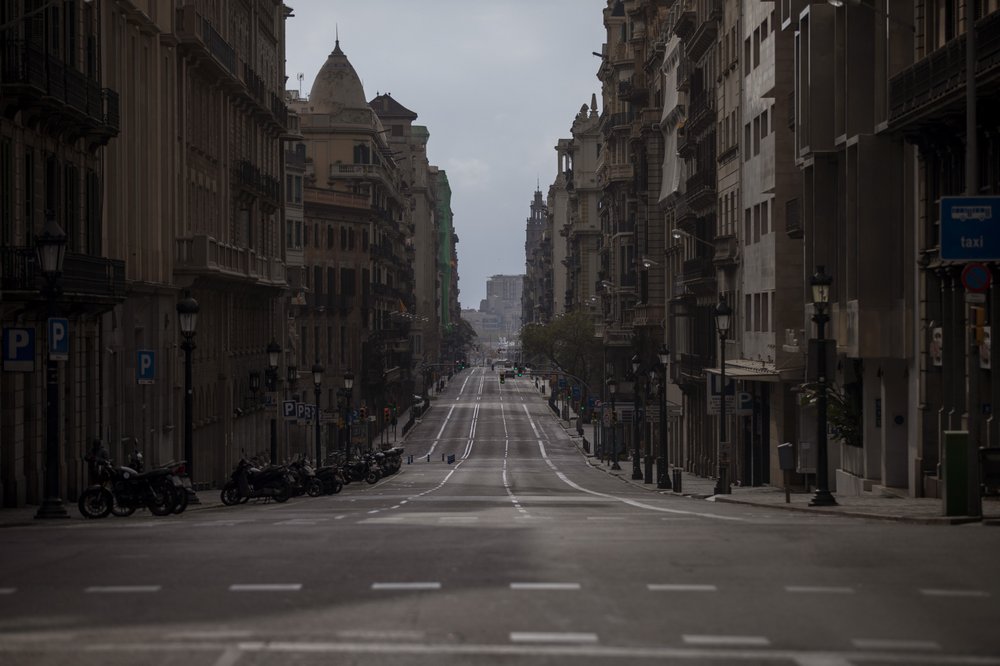 The Latest on the coronavirus pandemic, which has infected more than 307,200 people and killed more than 13,000.

The COVID-19 illness causes mild or moderate symptoms in most people, but severe symptoms are more likely in the elderly or those with existing health problems. More than 92,000 people have recovered so far, mostly in China.

TOP OF THE HOUR:

— Emirates halts flights to over 100 destinations.

MADRID — Health authorities in Spain say confirmed coronavirus infections have risen by over 3,600 in one day.

The jump in cases from Saturday to Sunday is down from nearly 5,000 the day before.

Spain is Europe's hardest hit country behind Italy and has 28,572 infections and 1,720 deaths.

Spain is completing its first week of lockdown measures to keep people at home. Non-essential stores have been closed.

Pakistan: Pakistan's Prime Minister Imran Khan won't implement a total lockdown because it will affect 25 percent of the population living below the poverty line.

He asked citizens to self-quarantine if they suffer from any coronavirus symptoms. He said Pakistan will overcome the virus if people cooperate and avoid socializing.

Khan said Pakistan's economy is not strong enough to subsidize meals for the poor on lockdown.

Minutes after Kahn's address to the nation, the Chief Minister of Pakistan southern Sindh province announced a complete lock down of his province for next two weeks. Sindh is the most affected province where nearly 300 people have tested positive for COVID-19.

DUBAI — The long-haul carrier Emirates has halted flights to over 100 destinations, cutting some 70% of its routes over the ongoing coronavirus pandemic.

The Dubai-based, government-owned airline is a crucial link in East-West travel and had still been flying into Beijing despite the virus outbreak.

Beijing flights, however, will end Monday.

Some routes will be halted through the end of June. Before the crisis, Emirates flew to 145 destinations.

TUNIS — Tunisia said all citizens must stay at home in isolation for two weeks to stem the spread of coronavirus.

COVID-19 is still relatively localized in the North African country and has killed one person.

Prime Minister Elyes Fakhfakh said Sunday all non-essential members of the workforce should stay at home through April 4 and it will require "a lot of wisdom, responsibility and discipline."

Fakhfakh said the state will provide funding for vulnerable businesses, subsidies for laid-off workers, and moratoriums on to bank loans. He also announced a two-month suspension of payment for electricity, water and telephone bills.

PRISTINA, Kosovo - Kosovo authorities have reported the first COVID-19 death in the country.

The Infectious Clinic said the fatality was an 82-year old man from the village of Dumnica, Podujeva, 30 kilometres (20 miles) north of the capital, Pristina.

The patient went to the hospital a week ago with "mass pulmonary and pneumonia indications," and also suffering from other cardiac and lung chronic diseases.

He had contacted the virus from his son and daughter.

Kosovo has 28 cases as of Sunday. It is in a total lockdown with all its air and land border crossing points shut. Authorities have closed schools, cafes and restaurants and all shops except those offering food and medical supplies.

BERLIN — German Chancellor Angela Merkel plans to hold a video conference with the governors of Germany's 16 states Sunday to discuss whether further measures are needed to prevent people spreading the coronavirus.

Germany's states have imposed varying levels of lockdown, causing a heated debate about which measures are appropriate to contain the virus.

Some officials have called for the rules to be the same nationwide.

While Bavaria has ordered people to stay indoors with few exceptions, Berlin still allows gatherings of up to 10 people.

THE HAGUE, Netherlands — The Dutch government sent an alert to mobile phones throughout the country Sunday urging people to keep 1.5 meters (five feet) apart after thousands of people flocked to beaches and parks a day earlier.

The Netherlands is a densely populated nation of 17 million but not in a total lockdown to battle the coronavirus. The government has banned gatherings of more than 100 people and told citizens not to get too close to one another.

"Follow government instructions: Stay 1.5 meters apart! Are you sick or have a cold? Stay at home. Protect yourself and people around you. Together against Corona," the NL Alert said in Dutch before adding in English: "Keep your distance to others."

Local authorities and police also warned people to keep their distance or urged them not to visit popular beaches along the Netherlands' North Sea coast, while a natural park organization tweeted that parks were "swamped with thousands of visitors" and urged people to go home or stay at home.

The country's public health institute said Saturday that 136 people have died in the Netherlands in the coronavirus outbreak. More than 3,600 people have tested positive for the virus.

LONDON — Sunday is Mother's Day in Britain, and the government has a stark message for millions of citizens: A visit to your mother could be life-threatening.

In a message to the nation, Prime Minister Boris Johnson implored Britons to forego family visits and Sunday lunches. He said "we cannot disguise or sugar coat the threat" that "if your mother is elderly or vulnerable, then I am afraid all the statistics show that she is much more likely to die from coronavirus."

On Friday, Johnson said that he hoped to see his 77-year-old mother on Mother's Day. His office later said that he would speak to her on Skype.

The UK government is scrambling to toughen its response to the coronavirus outbreak amid criticism it did not act quickly enough to close schools, pubs and restaurants.

Britain has 5,018 confirmed cases of the virus, including 233 deaths. The government says Britain will be facing a crisis on the scale of Italy's in two weeks if people do not heed instructions to stay home and avoid contact with others.

BERLIN — Authorities in Austria's western region of Tyrol have called on anyone who visited a bar in the Ziller valley earlier this month to watch for symptoms of the new coronavirus.

So-called apres-ski bars have emerged as a hub of infection, with tourists often carrying the virus back to their home countries and causing an outbreak there.

Officials said Sunday that Tyrol has recorded 839 confirmed cases of the coronavirus, at least 32 of which were in the Ziller valley.

Authorities said tracing possible contacts people had in bars is proving particularly difficult and urged anyone who visited bars there from March 8-15 to call a medical hotline if they feel symptoms.

MOSCOW — Nine hulking Il-76 cargo planes are being loaded at the Chkalovsky military airport in Moscow as Russia prepares to send medical personnel and supplies to Italy to help the country's efforts against the coronavirus.

The mission is to begin Sunday, one day after Russian President Vladimir Putin offered the aid in a telephone conversation with Italian Prime Minister Giuseppe Conte, whose country has confirmed more than 53,000 coronavirus cases and over 4,800 deaths.

The mission will include eight mobile medical teams along with medical equipment and aerosol disinfection trucks.

Uzbekistan is closing its borders for its citizens and will require residents to wear masks if they leave their residences.

An announcement from the country's commission to prevent the spread of the coronavirus said the borders will closed Monday to everyone except foreign citizens leaving the country and international cargo-haulers.

Beginning Wednesday, anyone not wearing a mask in a public place will be fined, the commission said. Uzbekistan has recorded 42 cases of coronavirus infection. The country has land borders with Kazakhstan, Turkmenistan, Kyrgyzstan, Afghanistan and Tajikistan.

A government statement said all passenger flights and ships will not be allowed to enter the Indian Ocean island until the situation returns to normalcy.

The government has stepped up measures as the number of confirmed cases of the coronavirus have risen to 77.

ISLAMABAD — A doctor who was engaged in screening for the coronavirus in returnees from Iran himself fell prey to the deadly virus in northern Pakistan.

Faiz Ullah Firaq, spokesman of Gilgit Baltistan government, said Sunday "a young doctor Usama Riaz who was on duty of screening pilgrims arriving from Iran and other pilgrims coming into Gilgit Baltistan (GB) is in critical condition after being infected by the coronavirus."

"Dr Usama Riaz, who hails from Chilas area of Diamer district in GB, was admitted in Gilgit District Headquarter Hospital on Friday night after falling unconscious and is presently on a ventilator."

Also, local media reported that a US diplomat arrived at Islamabad airport the previous day with suspected symptoms of the coronavirus. Authorities have isolated him at the airport but embassy officials promised that he will be quarantined at the facility in the US embassy. There was no confirmation from the embassy in Islamabad.

TOKYO — Japan has issued a travel warning for its nationals, urging not to make unessential trips to the United States because of the rapidly expanding coronavirus outbreak in that country, the foreign ministry said in a statement.

Japan has taken similar steps to most European countries and banned trips to China, South Korea as well as Iceland, San Marino and parts of Italy, Switzerland and Spain.

As of Saturday, the US had 15,219 confirmed cases and 201 deaths, the ministry said, citing the US Center for Disease Control.

The foreign ministry also said the decision came after the US raised travel caution to Japan and four countries to level three, urging Americans not to make nonessential trips to Japan and requiring a 14-day self-imposed quarantine for Japanese nationals entering the US

HONOLULU — Hawaii's governor has instituted a mandatory 14-day quarantine starting Thursday of all people travelling to the state as part of efforts to fight the spread of the coronavirus, Hawaii News Now reported.

The order applies to returning residents as well as visitors.

"We need to come together as a community to fight this virus," Gov. David Ige said at a news conference in the state Capitol. "This mandate is the first of its kind in the nation. We want this action to send the message to visitors and residents alike that we appreciate their love for Hawaii but we are asking them to postpone their visit."

The state announced 11 new cases of people with the coronavirus, bringing Hawaii's total to 48, according to Hawaii News Now. Three of them are hospitalized.

The US Army announced a soldier with the 25th Infantry Battalion based in Hawaii tested positive for the coronavirus, the first case linked to the Army community in the state, Hawaii News Now reported. The soldier is in isolation.