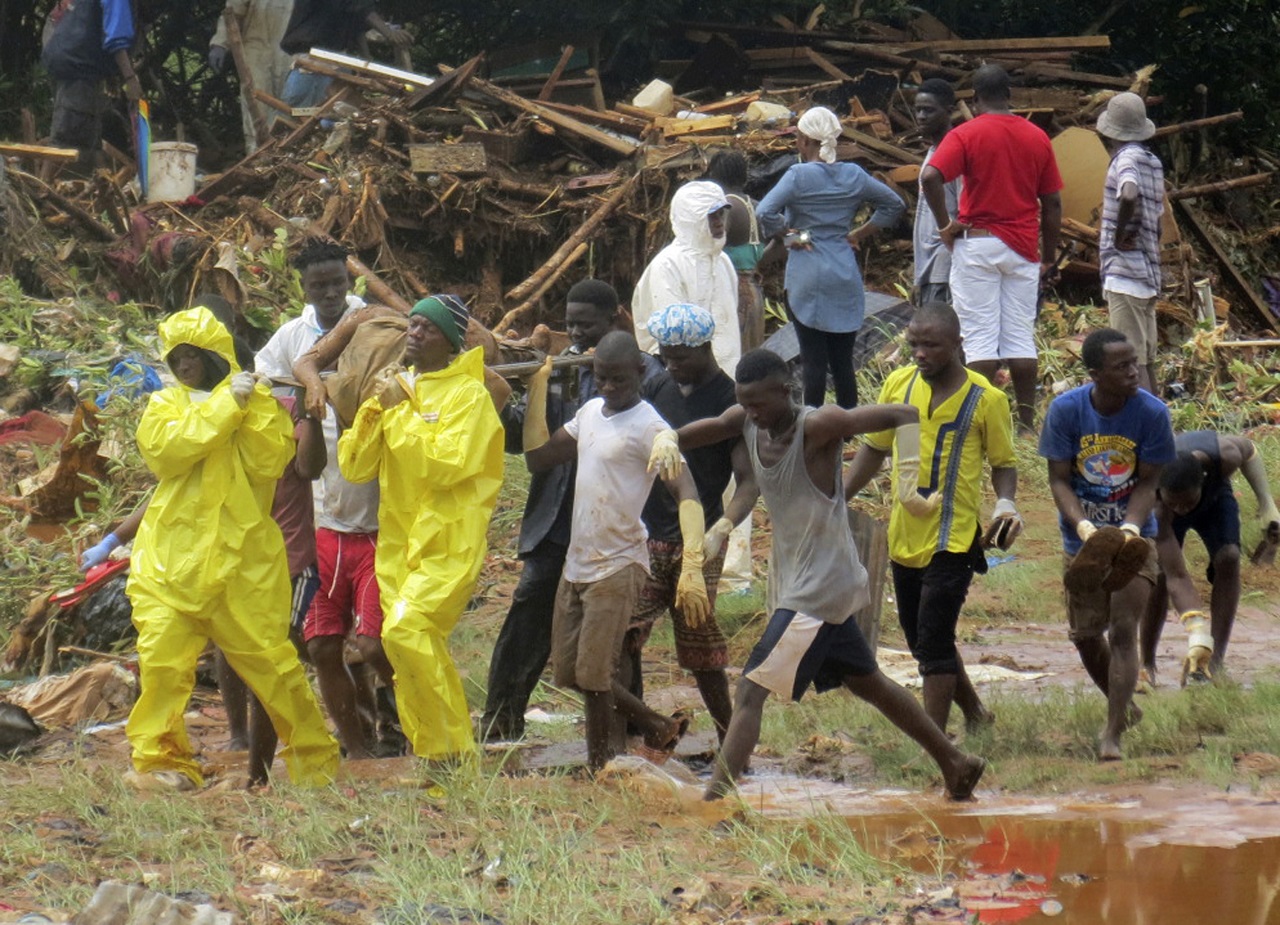 Rescue workers carry the body of a victim from the site of a mudslide in Regent, east of Freetown, Sierra Leone, Monday, Aug. 14, 2017.

The death toll from massive mudslides in Sierra Leone's capital was certain to rise Tuesday as bodies washed up on a beach and workers searched for an untold number of people buried in their homes. The Red Cross estimated that 600 people were still missing.

Authorities have said more than 300 people were killed in and around Freetown on Monday following heavy rains. Many were trapped under tons of mud as they slept.

The Connaught Hospital mortuary in central Freetown was overwhelmed on Tuesday with more than 300 bodies, many spread on the floor.

"The magnitude of the destruction as a result of the disaster is such that the number of victims in the community who may not come out alive may likely exceed the number of dead bodies already recovered," said Charles Mambu, a civil society activist and resident of one affected area, Mount Sugar Loaf.

In a sign of hope, he said, "two bodies were brought out alive from the debris last evening."

Government spokesman Cornelius Deveaux said rescue operations began early Tuesday to remove people still believed to be buried in the rubble. Heavy equipment was deployed to dig into the piles of red mud.

Deveaux said definitive death figures were unknown "as the mortuary is overwhelmed with corpses — men, women and children."

Many bodies were in a horrible state, missing arms, heads or legs, Deveaux said, adding that proper burials will be vital in keeping disease at bay. "Contingency plans are being put in place to mitigate the outbreak of disease like cholera," he told a local radio station, FM 98.1.

Sulaiman Parker, the environmental protection officer in the Freetown City Council, said bodies will be buried in the next 48 hours.

Some rescue workers and volunteers dug overnight through the mud and debris with their bare hands in a desperate search for missing relatives. Military personnel have been deployed to help with the operation in the impoverished West African nation.

"I have never seen anything like it," said Abdul Nasir, program coordinator for the International Federation of Red Cross and Red Crescent Societies. "A river of mud came out of nowhere and swallowed entire communities, just wiped them away. We are racing against time, more flooding and the risk of disease to help these affected communities survive and cope with their loss."

An estimated 9,000 people have been affected, Nasir told The Associated Press.

Many of the impoverished areas of Sierra Leone's capital are close to sea level and have poor drainage systems, exacerbating flooding during the rainy season. Freetown also is plagued by unregulated building of large residential houses in hilltop areas.

Thousands of makeshift settlements in and around the capital were severely affected.

"The government has been warning people not to construct houses in these areas. When they do this, there are risks," Nasir said. "People don't follow the standard construction rules, and that is another reason that many of these houses have been affected."

Deforestation for firewood and charcoal is one of the leading factors of worsening flooding and mudslides.