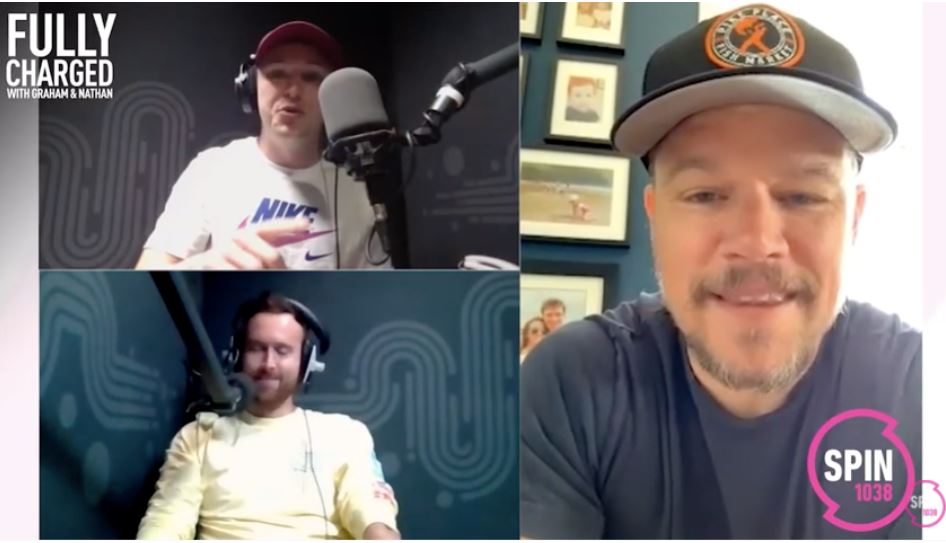 With all this extra time on our hands since coronavirus forced the world as we know it to practically shut down, many of you might spend your days wondering what the rich and famous do during lockdown.

What we can tell you is that Matt Damon, aka Jason Bourne, has been quarantining with his family in Dublin, Ireland.

And the world now knows exactly what he's been getting up to, thanks to a local Dublin radio station called Spin 1038 and two VERY determined breakfast show hosts.

The tale of how hosts Graham and Nathan finally tracked down Damon and bagged a world exclusive interview with him reads like a Hollywood blockbuster - which involves a cameo appearance from U2 frontman, Bono!

It all began when Matt moved to Dublin in March with his wife and three youngest daughters to shoot new movie, The Last Duel.

But then the COVID-19 pandemic shuttered life as we know it and instead of returning to America, the Damon family decided to quarantine in Dalkey, a leafy seaside resort in the suburbs of South County Dublin.

Despite the global fanfare, Matt has been keeping a very low profile - despite the superfans who have been able to snap pictures of him on his rare outings.

But the guys at Spin 1038's Fully Charged breakfast show weren't taking no for an answer and pulled out all the stops to try to get Matt's attention.

And in true Hollywood happy ending style, their prayers were answered as it turns out Matt had been listening to the show all along - and just couldn't remember the number to call to get in touch.

But as we all know, behind every great man is a great woman and it was Matt's wife who encouraged him to Google the station's number and get in touch.

His people did, and the rest is history!

And in an interview which has gone viral across the globe, Contagion star Matt gave Nathan and Graham the lowdown on lockdown.

He also revealed that his eldest daughter, Alexia - who remained in New York where she was attending college - actually contracted COVID-19, but that she has recovered and is doing fine.

The movie star proved he's just like the rest of us when he admitted he is worried about the future.

"We don’t have adequate testing so there’s going to be another surge it looks like back home (in LA)," he said.

"There’s all these areas in America that it hadn’t really penetrated and now, y’know…"

But he said he believes the message of social distancing has finally gotten through to the world.

He revealed: "I think we’ve all got the message now, everybody’s doing the isolation and the social distancing and hand washing, everything we can to mitigate this.

But despite all the uncertainty, one sure thing is that Matt has fallen in live with Ireland.

Describing it as like a "fairy tale", Matt said: "This is one of the most beautiful places we've ever been."

And he also heaped praise on Irish Prime Minister, Leo Varadkar, who himself made headlines around the world when he rejoined the medical register to join the frontline fight against COVID-19.

Matt said: "You've got a president who just goes to the hospital and starts working.

"I mean what a badass, it's just on another level."

Coronavirus: 10 things to keep you busy in self-isolation