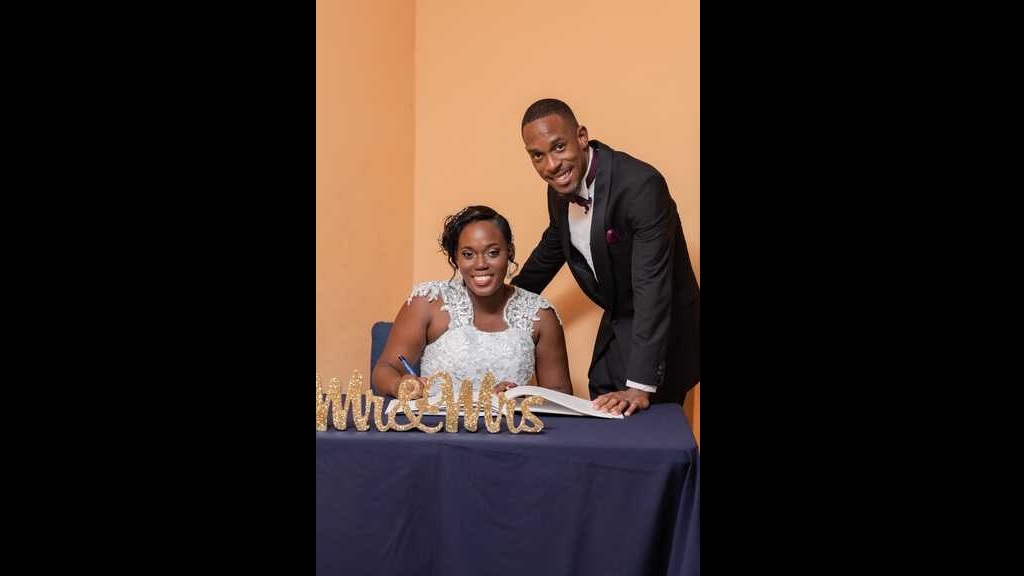 Getting married during a global pandemic isn't any little girl's dream, but Shontelle Simone Farrell nee Bridgeman wasn't going to let COVID-19 rain on her parade.

Initially, the wedding was slated for June 27, but the couple decided to bring the date forward to April 16. However, after the Barbadian Government implemented a curfew on March 27, the worried couple threw caution to the wind and decided their wedding would be held within the next seven days.

On April 3 at 1 pm, the same day the government imposed a 24-hour curfew after recording 46 positive cases of the novel coronavirus, Shontelle and Anthony Leroy Emmanuel Farrell tied the knot.

What was supposed to be a glorious occasion surrounded by friends, family and laughter was muddied by the outbreak. The attendees were limited to the priest and two witnesses who helped to live stream the wedding on Facebook. Whatever fairytale wedding they imagined for themselves had been dismantled by the reality of COVID-19.

"You are supposed to be excited but everything is so close so it was mixed emotions. I am a planner, I like to cross every T, dot every I, but I was just walking through that week and the entire process was challenging because it was either postpone the wedding until we don’t know when which wouldn’t work for me, or bring it up and let us do something private and that was not the initial plan," Shontelle told Loop News.

The six days before the wedding were a blur for the couple who rushed 'here, there and yonder' to do final preparations.

Shontelle's dress wasn't finished and Anthony still didn't have a suit, but against the odds they successfully pulled of a last-minute attempt. The glaring absence of their friends and family on their big day could be felt, especially for Shontelle who wanted her grandmother to see her on her wedding day.

"I would have been raised by my grandmother from three months old so she would have been that person even during this entire process that was there for me so imagine being raised by someone from three months old and then on one the most important days of your life having to make a decision. She is over 70 and she is high risk so it was about saying 'okay, I want you to be there but I don’t want you to be out'," Shontelle explained.

Anthony also lucked out because with his family members from overseas unable to make the wedding, he was able to feel their presence and love via their comments and reactions during the Facebook Live event.

"My family is large so the challenge was not having my family to share the moment so I can see their face and laugh and hug and kiss and share stories about when I was small. Every family gets together is like an event so not having that was a downside of it," he said.

During the two-month shutdown, the newlyweds haven't been able to see their family members and it has also dampened their honeymoon plans. Shontelle and Anthony were ecstatic about vacationing on the beaches of Panama in June/July, but as COVID-19 would have it, those plans are postponed.

The positive of the global pandemic and shutdown is that it made them closer. Not only were they living together for the first time but due to the island-wide shutdown, they would be together 24/7. Shontelle and Anthony are insurance advisors for Guardian Life of The Caribbean and their 'alone' time is limited to evenings after work.

Battling a hectic and busy work schedule, working from home has given them time to enjoy each other's company.

"I don’t think if things were normal or the country had open back up earlier, the amount of time we spent with each other would have been the same. I don’t think we could have done that because our jobs are very busy and time-consuming. This is my first time since secondary school that I had a vacation and I did nothing," Anthony revealed.

Shontelle echoed: "The shutdown brought us closer. It would have been the first time for us living together and it allowed us to get through some of those teething challenges because we were always in the same space."

With the country reopening, the couple is looking forward to hosting a celebratory barbeque or 'potluck' for family and friends later this year.

Restaurant staff have to adjust to new COVID-19 workplace rules

Stuck in lockdown: 10 things Caribbean people miss the most