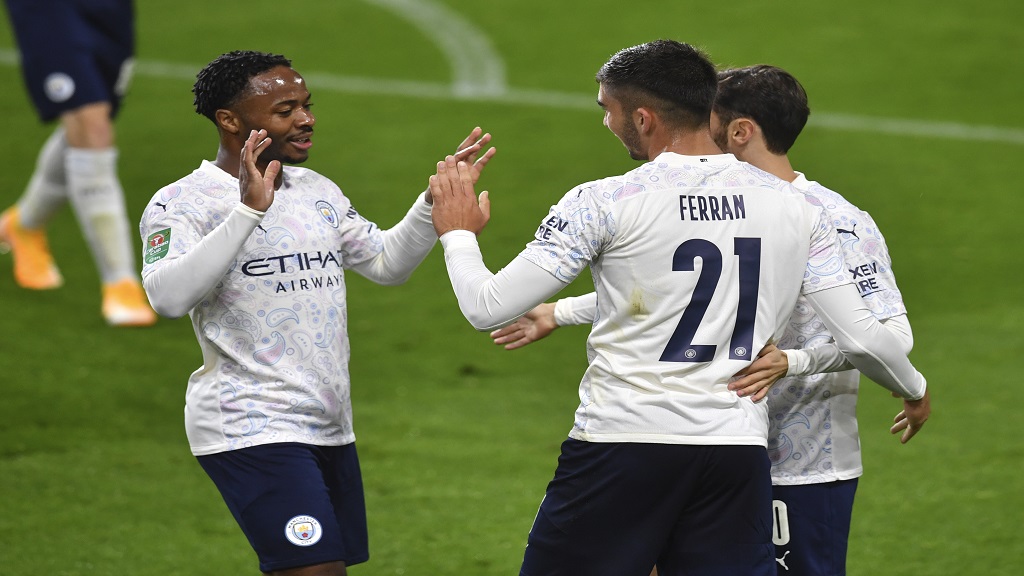 In this congested season like no other, coaches are typically using the English League Cup to rest and rotate key players.

The Manchester City manager fielded all of his top available stars against Burnley on Wednesday in a bid to stay on course for a fourth straight title in the competition, and it paid off.

Manchester United, Everton and Newcastle also advanced to the quarterfinals, joining Tottenham after their penalty-shootout win over Chelsea on Tuesday.

Determined to win any trophy going, Guardiola might have also wanted City to rediscover some rhythm after a wild 5-2 loss to Leicester in the Premier League on Sunday — one of his heaviest defeats as a manager.

His team did just that, with Sterling looking more at home as a makeshift central striker — in the absence of the injured Sergio Aguero and Gabriel Jesus — than he did against Leicester.

The England international could have had two or three goals before opening the scoring in the 35th minute by lashing in a left-footed finish from Benjamin Mendy’s cross.

Torres squared the ball across the face of goal to set up Sterling for a simple second goal in the 49th, and the roles were reversed in the 65th as Torres ran through to curl home a finish with aplomb for his first goal since joining from Valencia in August.

“It was for the rhythm, and because these players wanted to play,” Guardiola said of his strong team selection. "This competition is special to us and there is just two games — this one and Leeds (in the league) on Saturday — before the international break. After our result (on Sunday), it was important today.”

City have won five of the last seven editions of the League Cup. One more triumph will draw the team level on overall League Cup titles with Liverpool, which have captured it eight times.

Unlike Guardiola, Man United manager Ole Gunnar Solskjaer fielded a lineup full of fringe players but it was still enough to see off Brighton 3-0 in the teams' second meeting in four days.

While the first game was decided by a 100th-minute penalty by Bruno Fernandes on Saturday, United had the cup match wrapped up much earlier thanks to a 44th-minute header by Scott McTominay, a low finish by Juan Mata in the 73rd, and a deflected free kick by substitute Paul Pogba in the 80th.

Mata, a 32-year-old playmaker firmly down the pecking order at United these days, was the team's outstanding player. He also set up McTominay's goal.

“I feel good physically and mentally, and have a passion for the game," Mata said. "I have a lot of football left in my legs and my mind.”

Dean Henderson pulled off a couple of great saves for United — particularly one down low to deny Leandro Trossard in the second half, when the score was 1-0 — to show he is in prime shape to come in for long-time goalkeeper David De Gea if ever needed.

Everton's 4-1 win over West Ham — secured by a second hat trick of the season by Dominic Calvert-Lewin — came at a cost.

Richarlison and Allan, two Brazilians who have been key to the team's perfect start to the season in the Premier League, went off injured in the second half.

Allan, the midfield anchorman signed from Napoli in the offseason, looked particularly seriously as he indicated a tear to his left groin muscle before being helped off the field.

Calvert-Lewin took his haul of goals this season to eight in five games by opening the scoring in the 11th and adding more goals in the final 12 minutes. He also scored a hat trick in Everton's other home game so far, against West Bromwich Albion in the league.

Richarlison scored Everton's other before hobbling off with an apparent ankle injury that he initially tried to run off.

Everton have opened a season with six straight wins in all competitions for the first time since 1938.

Fourth-tier Newport were looking to reach the last eight for the first time in their 108-year history, and were on course to do so at the expense of Newcastle heading into the 87th minute.

Newcastle avoided a major upset, though, as Jonjo Shelvey took the game to spot kicks with a curling shot into the top corner to make it 1-1. Newcastle then recovered after an early miss by Joelinton in the shootout to prevail 5-4.